The life story of Beatrice Woodhouse (born Dowse) as told in letters, from 1891, when Beatrice was sent back to Ireland from Canada, to her death in 1964 in Dublin. Compiled and edited by her grand-niece Alana Stephens and published on this website in a series of chapters.

There is a period of silence in the correspondence with some letters going astray due to the war, but the next letter is one of Aunt Kate’s dated April 27, 1917 in which she describes Beatrice’s new employment. It is obvious that Violet and Aunt Kate somehow managed to stay at 3 Connaught Terrace as they had hoped to, as that is their address in 1917. 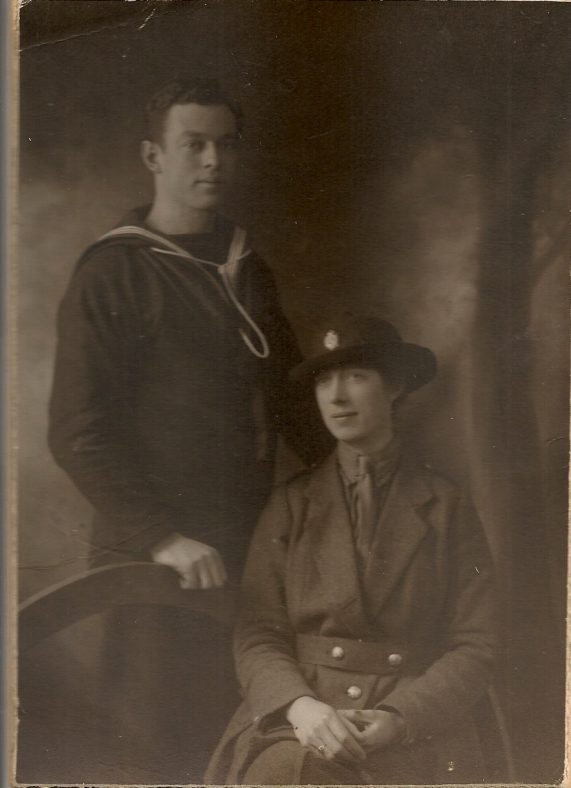 Beatrice in Military Uniform with her cousin Harry Pentland

Your letter to Mauddated March 21 has just arrived – 5 weeks and 2 days on the way!! We do not know the reason, but set down all odd things to the War.

I am still alive but so weak I cannot sit up without help & always have some pain, which is allayed only by having a waterproof bag of very hot water on the aching spot. I have one now under my right shoulder. I would suffer a great deal more but for the hot water, an easy remedy.

Violet’s illness left her weak, so she accepted an invitation to Cavan. I do not suppose you know the name Sophie & Emma Keane[1] & Mrs. Motherwell, to whom the house belongs. She went for a fortnight but will stay another week.

Beatrice offered her services as a motor driver in Dublin & has been employed in taking to pieces & putting together again motors !!& has 2 books to study. She sleeps at her friends the Carsons, and comes here on Saturday evening till Monday morning early. I think her pay has not begun yet.

I have never let her sit up at night – Maud sleeps on a mattress in my small room where most of the cooking is done (we cannot afford a fire in the kitchen range).

Violet’s little garden is well filled with vegetables – of course she got a regular gardener to do it.

I wanted to write more but am too tired.

Maud sleeps on a mattress in my room. She loses 1/ 5 every month by nursing me. It is my greatest trouble. She is kindness itself & always cheerful.

Beatrice’s great-aunt Kate Quadling was becoming frail and realized that she could no longer capable of doing the things she longed to do. In Aunt Kate’s last letter, dated July 19, 1917 to her grand-nieces Brownie and Kathleen, she states, “My mental powers are stronger than my physical ones” and laments the fact that she is not able to do anything for the war effort herself, but tells her nieces she is organizing a project in aid of “very poor ladies who are nearly starving owing to the high cost of food” and asks her nieces if they would be able to help. She also asks if they could assist in sewing such things as camisole tops, pillowcases and baby’s frocks. She goes on to say,

If Beatrice can find time I know she will help me, but she is hard worked. I am glad that she had the few days in Carnew. She enjoyed driving the motors so much. I shall ask Bea to crochet a camisole top, but fear she won’t have time.

Aunt Kate lived another three years after her last letter, and died at her house in Dalkey.

A newspaper obituary for Aunt Kate gives the date of her death:

After Aunt Kate’s death May Dowse remarked in a letter to her daughter Kathleen, “I wrote Bea a long letter. She has no Aunt Kate to do everything for her and felt her death terribly I hear – went to skin and bone.”

Aunt Kate had been a constant in Beatrice’s life and a mother figure to her, so it is understandable that Beatrice felt the loss greatly. There is little information regarding Beatrice’s activities from the time of Aunt Kate’s death until 1923, when a momentous change occurred in Beatrice’s life.

[2] Other sources give his name as Barnabus Edward Quadling