You are here: HomenextPlacesnextLACKENnextThe Lord Mayor Comes A Callin

The Lord Mayor Comes A Callin 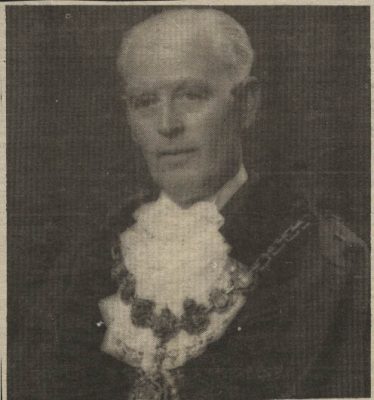 The sun shone brightly at Lacken-on-Whit Sunday morning, 1965, following a wet night. Outside the chapel, blue serge suits and brogan shoes were the order of the day. Some trouser legs bore the horizontal and tell-tale marks of winter storage. Polished hobnailed boots were very much in evidence and even pipe-covers seemed to give off an unprecedented luster.

On such a morning, it was easy to see what Anthony Cronin meant when he said that turf-smoke “…leaves a sweet, rich, poor-man’s smell on cloth.” It was the opening of the Mission, the beginning of a week when fire and brimstone would rain down on all and sundry. Until about Thursday night, when a tapering-off would be noticed.

The Lord Mayor of Blackburn, Laurence Edwards and his wife, Mary

The Retreat would close on the following Sunday with the renewal of Baptismal vows and Salvation for everyone. On the Sunday in question, there was also a more mundane reason for a turnout however. The Lord Mayor of Blackburn, Laurence Edwards, and his wife, Mary, the Mayoress, were guests of honor in Lacken. This was not just a flying visit to the Wicklow mountains by the First Citizen of the Lancashire engineering town where James Hergreaves invented the spinning jenny in 1764. No. This was one of our own coming home. Larry Edwards was born in England of an Irish mother. His father was killed in World War I, on Easter Monday, April 24, 1916. Larry was then aged 9 and his sister, Margaret, who later became a nun, was 5.

Shortly after their father’s death, their mother brought them to live in Shroughan, a neighboring townland of Lacken. They attended Lacken School. When Larry finished school, his mother brought him back to England, to Bolton.

There he worked in a solicitor’s office until 1928. He then got a post, as a managing clerk, in a solicitor’s office in Blackburn. He remained in that office, as a legal executive (F. Inst. L. ex) until he retired. He was elected mayor of Blackburn in 1965, bringing him further up the ranks of that little band of Irish people who left their stamp on English public life.

In 1965, Molly O’Higgins, from Dublin, who had worked as a “clippie,” was elected mayor of Southampton. Paddy O’Connor became mayor of Camden — although the English support of him could hardly be described as unanimous. By the early 1970s, the Irish occupied the office of mayor in three British boroughs: Luton, Derby and Kettering.

Mayor Edwards received a very warm welcome in Lacken. Speaking from a makeshift rostrum, consisting of two “four-inch solids,” the parish priest, Fr. John Moynihan, regaled him with a most witty and heart-warming speech. While a Telefis Camera whirred in the background, Wicklow Co. Councillor Jimmy Miley, a schoolmate of Larry’s, spoke of their early days in Lacken and named some “outstanding scholars.”

Larry Edwards, in his chain of office, spoke of his school friends and teachers, one of whom — Mrs. White was present — with deep affection. Larry was a Blackburn Town councillor from 1945 to 1975 and Jimmy Miley, R.I.P., served for over 30 years as a member of Wicklow Co.Council, up to his death two years ago. Two Lacken schoolboys in whom their respective communities had confidence.

Larry Edwards died on March 6, 1980, R.I.P. In a letter (March 27, 1984), his widow told me how he loved Lacken. How “often he spoke of Mr. Lambert (his headmaster) and all that he did for him.” Here was a man who spent his formative years in Lacken, who didn’t lose the run of himself and who was described, at his funeral in Blackburn as “a shining example to all — especially to the young.”