You are here: HomenextTopicsnextWICKLOW'S WAR OF INDEPENDENCE | The Historians' ProjectnextASHFORD | Sheila ClarkenextBurning of the home Dick Smyth, Ballyduff Upper, Ashford by Sheila Clarke 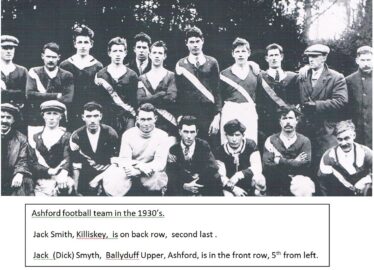 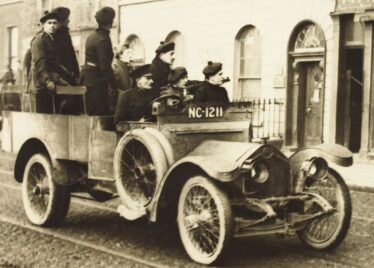 John Smyth (Dick) Ballyduff Upper, Ashford, and his neighbour, Jack Smith from  Killiskey Cross Roads, Ashford, were both members of the East Wicklow Brigade.  On the night of 8th September 1920, at the closed Killoughter Railway Station,  they attempted to cause disruption on the line.

Towards daybreak, the two men parted company on reaching Jack Smyth’s home, with Dick cycling on further.  At the turn for his home at Ballyfuff Upper, he was surprised by the ‘Black and Tan’ soldiers  who demanded that he identify himself.  In a difficult spot, Jack declared his name as Ter Smyth (his younger brother was Terence) and that he had been out playing cards in a friend’s house.

Initially the soldiers believed Dick’s story and drove off.  Being wary, Dick did not go home, instead he ran up the hills to hide out.  Soon enough, the Crossley Tender doubled back and drove up the steep hill towards Jack’s home whereupon they ordered everyone outside.  The soldiers interrogated a sleepy 17 year old Ter (Terence) who insisted that he had been at home all evening and that he had been in his bed, asleep.  In reprisal at being duped, they ordered Ter to run around the field adjacent to the yard, ordering him not to stop running or he would be shot.  Wearing only his night clothes and no shoes, Ter circled the field numerous times until he realized that he would be shot the moment he fell down exhausted so he jumped the hedge and ran towards the hills of Carrignamuck.   From his hiding place he could see the roof of his home on fire. After the Crossley Tender had departed, the Smyth family managed to salvage what they could, moving into the stable until the cottage could be re-thatched.  The house which still stands today was later the home of Dick Smyth’s brother, Joe (Begley) Smyth and his sister, Liz.

This was the second occasion that the thatched roof of the Smyth family had been set alight by occupation forces.   In reprisal, following the Battle of Newtown in June 1798, the Yoemen soldiers rode from Newtownmountkennedy into Ballyduff Upper, searching for Andrew O’Flaherty, a United Irishman who was involved in the Battle of Newtown.   On reaching Annagapple Lane they came upon Ter Smyth whom they bayonetted to death.  Andrew O’Flaherty was not at his home in Killiskey so they killed his blind father, Arthur and  two other local men.  The rampaging soldiers set fire to every thatched roof they could see.   The slain Ter Smyth’s widow and child, having also been burnt out of their home, sheltered under trees until their thatched roof could be restored by their neighbours.

Dick Smyth, who witnessed the roof in Ballyduff Upper being set alight in 1920 was a  great- grandson of the slain Terence Smyth.

(Information sourced from the Military Service & Conflict collection on www.findmypast.ie)