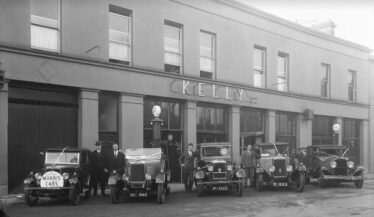 In October 1918 as political unrest swept the country, the Dublin Castle authorities introduced ‘Defence of the Realm Regulation 9AA’ under which owners of motor cycles were required to hold a permit from the competent naval or military authority or from the chief police officer of the district in which the motor cyclist resided and had to produce this when stopped.  Exceptions to this were serving members of H.M. Forces or a member of the police force i.e. Royal Irish Constabulary or the Dublin Metropolitan Police.  In November 1919 this permit requirement was extended to owners of motor cars.

In August 1920, following the collapse of law and order in Ireland, the British government enacted the ‘Restoration of Order in Ireland Act, 1920’ which extended the scope of military courts-martial to try people and replaced the holding of coroner inquests by military courts of inquiry which were frequently held behind closed doors with relatives of the deceased, the public, and press excluded.

An example of this exclusion process occurred in December 1920 when Volunteer William Owens shot dead during a raid on the Volunteer Hall in Shankill, Co. Dublin on Friday 10 December.  The following Monday the military inquiry into the death of William Owns was held in the boardroom of St. Columcille’s Hospital, Loughlinstown, Co. Dublin, as his remains had been removed to the hospital mortuary, behind closed doors with his family, relatives, and press, despite their protests, excluded from the hearing, from which it appears that no-one was ever held to account for his death. Following their inquiry, the military issued an order to Mr. Thomas Owens allowing the burial of his son and served him with a second order stating ‘than any demonstration or procession in connection with the removal of the body of William Owens from the mortuary, Rathdown Union [St. Columcille’s Hospital] and hereafter while awaiting interment or at the funeral is prohibited under the Restoration of Order in Ireland Act. They will report to the police where the body is taken and will be buried.’

The detailed ‘Restoration of Order in Ireland Regulations’ introduced under this legislation that month continued the prohibition and restrictions of having, keeping, or using a motor-cycle or motor car without a permit. In December 1920 additional regulations were introduced relating to where a vehicle (motor-cycle or motor car) was to be kept, the time of the day that the vehicle could be used, and the distance that could be travelled, as well as introducing a curfew. Vehicles could only be used between 6 a.m. in the morning and 8 p.m. in the evening and not travel more than 20 miles from where the permit holder resided.

The regulations also introduced a night curfew and vehicle owners had to comply with whatever hours were set by the authorities. Special permits excepting holders from the curfew were granted to religious ministers of all denominations, medical practitioners, veterinary surgeons, and nurses.  Remarkably in February 1921 the riding of a bicycle was prohibited.

In July 1921, in the wake of the Truce, the restrictions on limiting the hours and distance that a person owning motor vehicle could travel were suspended.