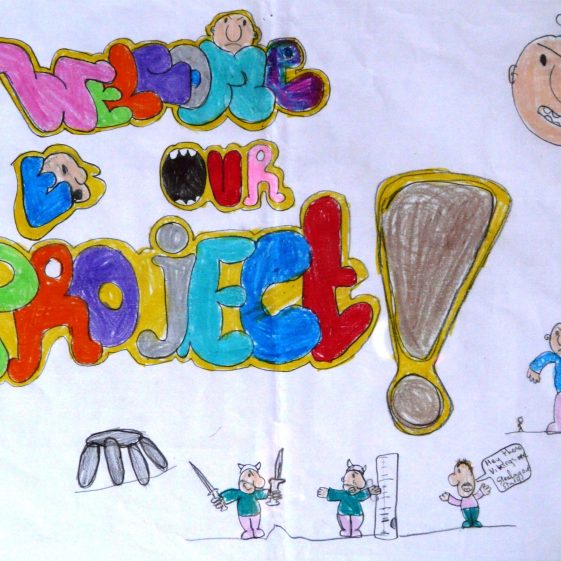 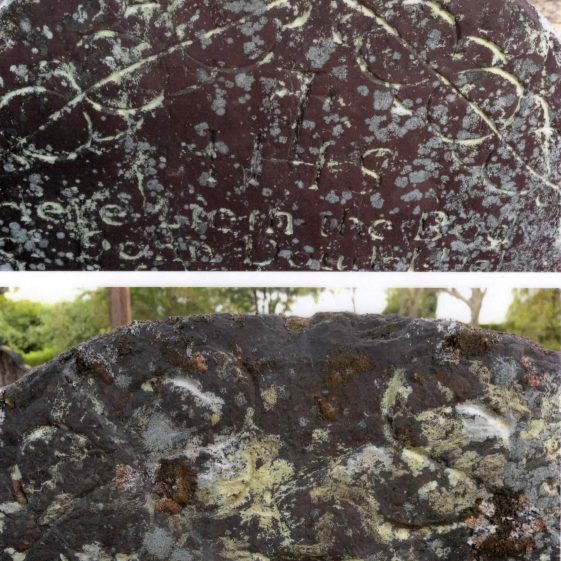 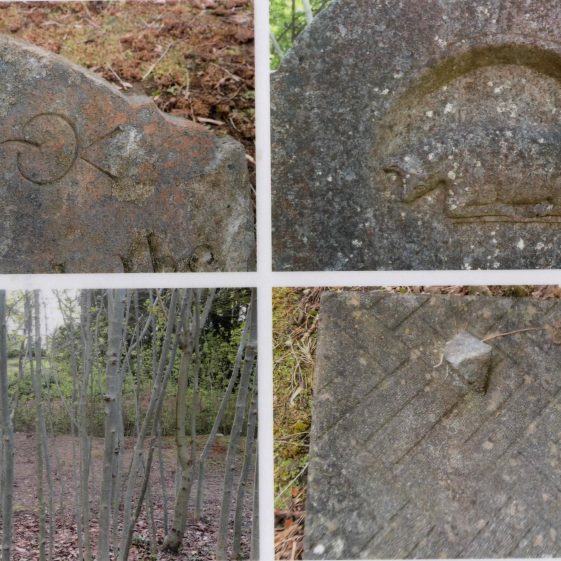 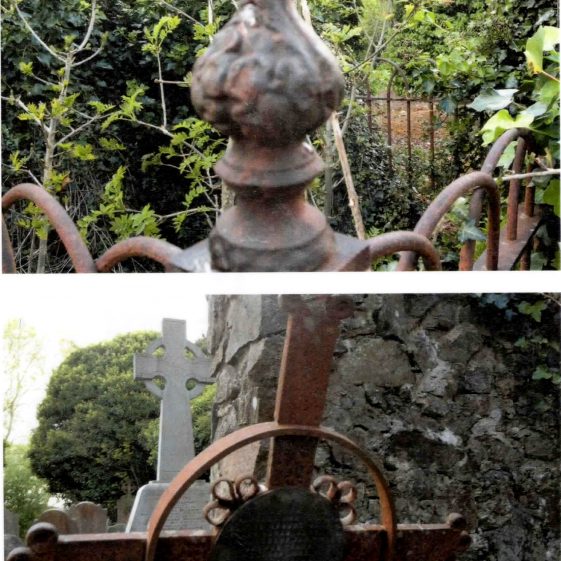 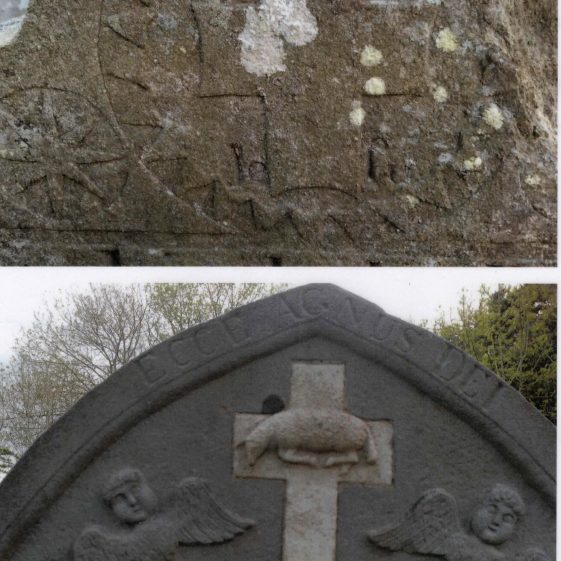 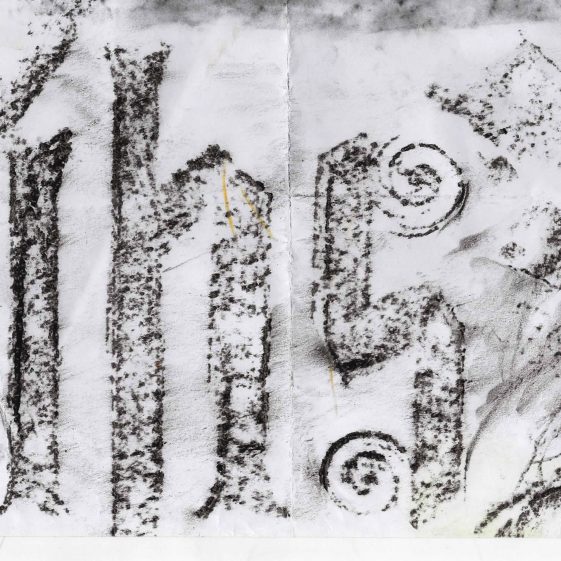 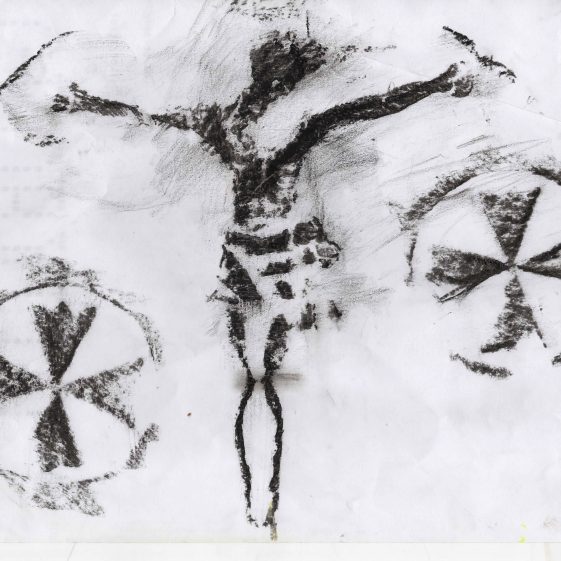 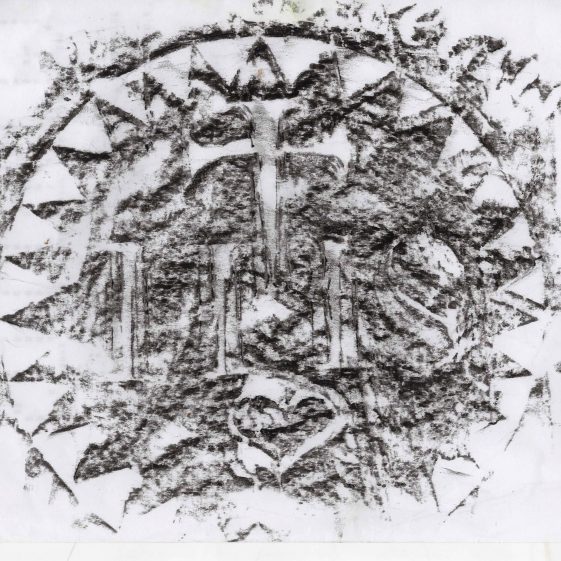 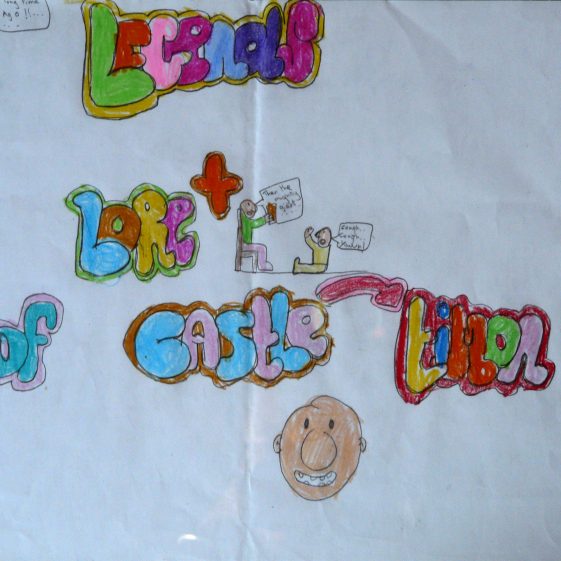 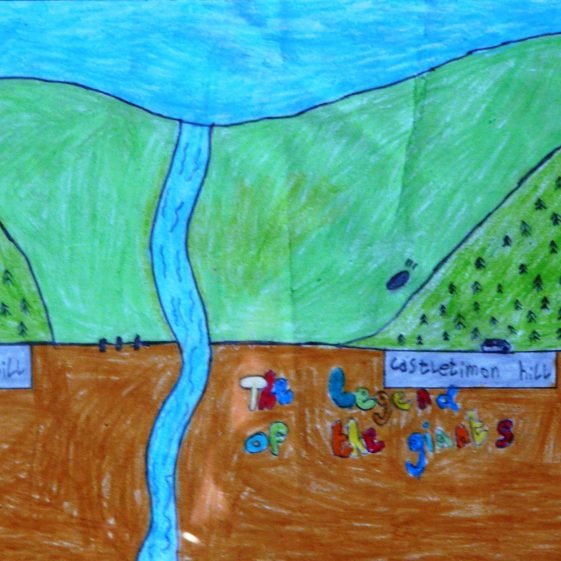 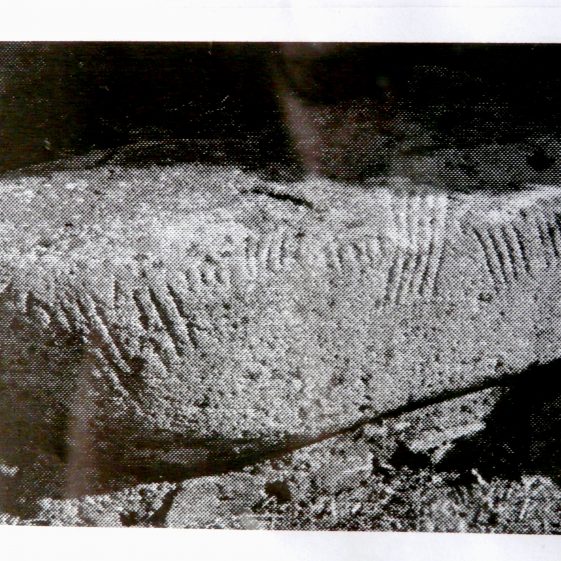 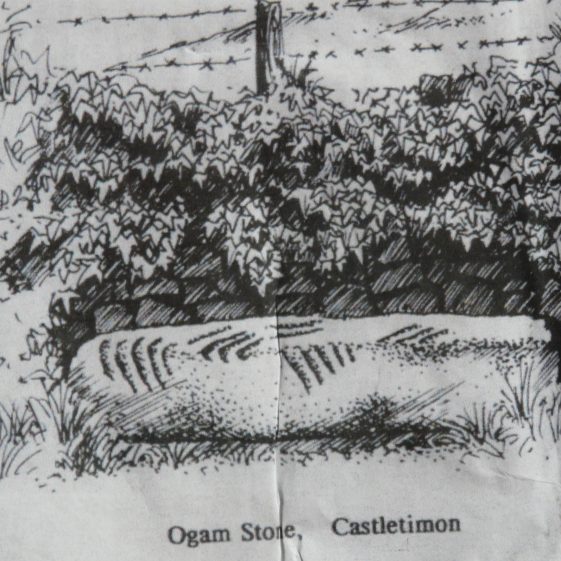 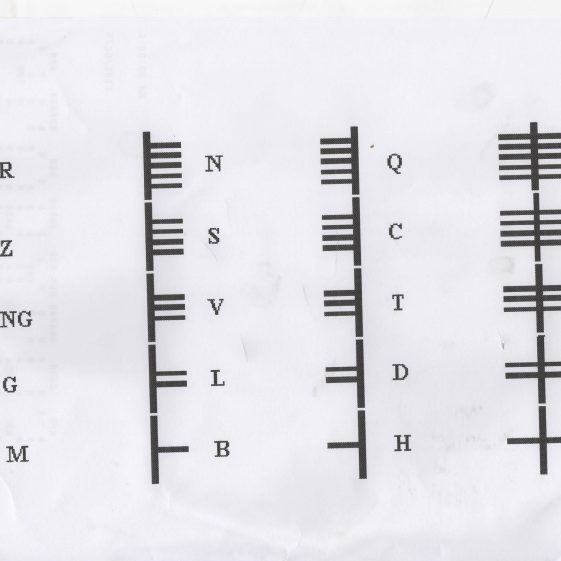 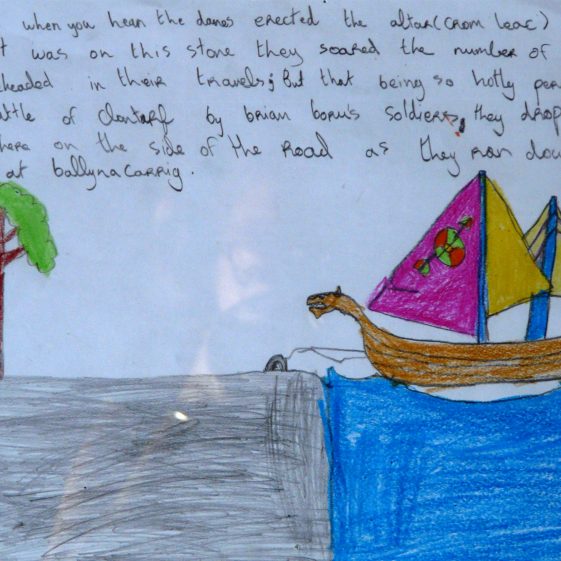 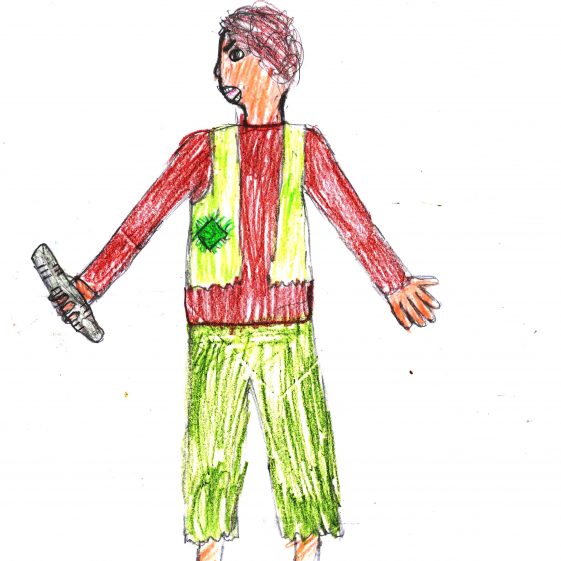 The Giant of Castletimon with the Ogham Stone
Castletimon National School 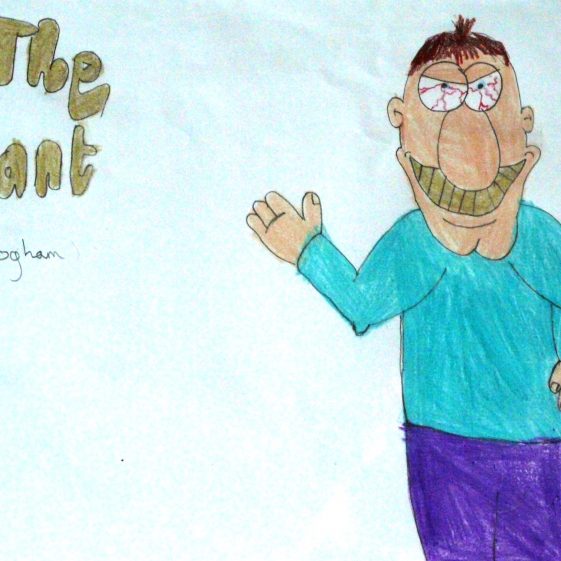 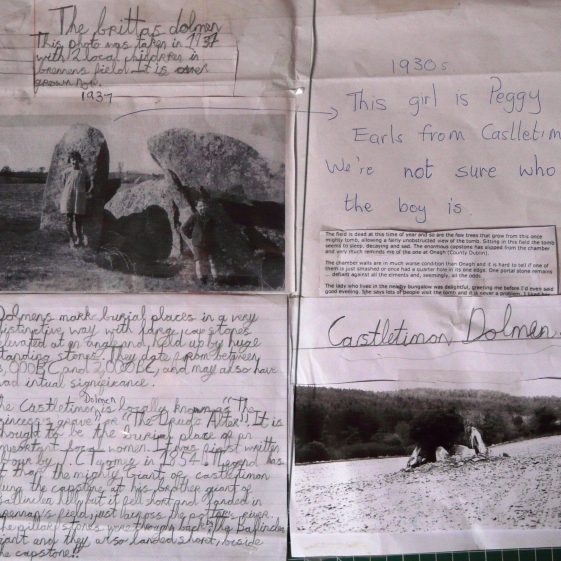 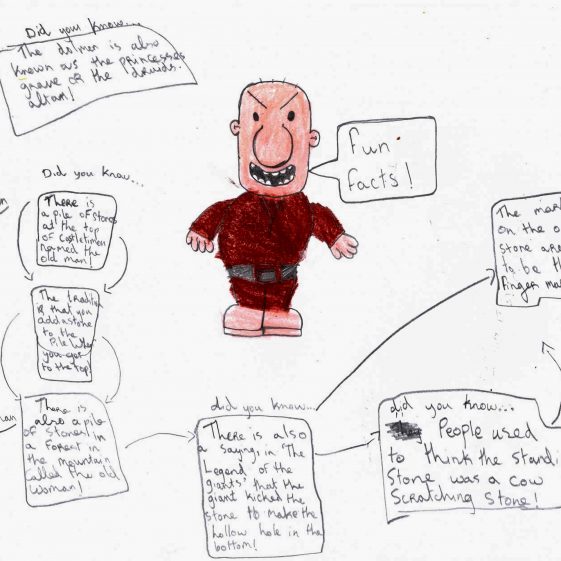 Castletimon is a small triangular shaped townland/parish near Brittas Bay Co. Wicklow. It is surrounded by water on all three sides, a small spring running from Noel Mc Grath’s farmyard on one side running into Potters river on the other and the third side is the Aghatruhan river.

Castletimon consists of quite a large wood owned by Coillte.  There is an old graveyard which has the ruins of an old chapel is nearby and there are quite a few headstone whose engravings can be read. A local resident Tom Byrne cleared the overgrown graveyard some years ago and it is now more accessable to local people.

The oldest headstone in the graveyard which can be read was erected in 1720 which is 293 years ago. It states “Here liety the body of William Duffey deceased may 1741, Margaret Ward deceased Agust 1720 aged 50 years old”.  The last person to be buried in Castletimon graveyard was a Delahunt who was killed in a car crash and her remains were cremated and buried in the family grave in 1989.  I noticed as I walked around the spelling of Delahunt changed from Dolahant to Delehunt to Delahunt. On the road above the graveyard there is a stone which is know as the “Giants Stone” and which is an Ogham Stone.  It is said to be a marker for a Druid burial place or so we are all lead to believe.  I have taken some photographs which are part of this project  to explain more about it.  I have spoken to Mr. Tom Byrne whose relations are all buried in Castletimon.  He told me that a lot of the Castletimon people lived to be an old age, most lived into their ninetys.

Castletimon Church was semi-ruined during the protestant Reformation but was used for secret clandestine Catholic worship up to 1690.  After this it fell into total ruin, but the graveyard continued to be used as it still is for a few long established families of the area.  An ancient water font from the church has been relocated to St. Mary’s Church at Barndarrig.  There is a Bullaun Stone beside the church.  This was used for the symbolic grinding of the priests Tithe corn.

History of the Graveyard

The graveyard of Castletimon contains many memorials to the various O’Byrne familes.  The earliest known memorial is dated 1720 to a William Duffy who is reputed to have died at the age of 95.  This would make his birth date 1626.  His life would have emcompassed the great days when Dunganstown House was at its best, its eventual fall and the passage of Oliver Cromwell’s army through the area.

Denis Cullen was a stonemason inthe area in the 1700’s.

The ruins of Castletimon Church are situated on the opposite side of the river.  It is still standing and was covered with ivy years ago.  The church originally consisted of a nave and chancel.  A holy water font lay inside the Northern doorway and was made of coarse granite stone.  It is now in the church at Barndarrig.  The burial ground seems to contain the of the ancient sept of the Byrnes.  The great majority of the headstones inform you that beneath “lie the mortal remains of a Byrne”.

This stone is known as the Giants Stone.  Castletimon Ogham Stone is lying in a niche at the side of the road.

The stone measures 1.5 metres by .48metres wide and .25 metres thick.  The inscription reads

“Netacari Neta Cagi” which translates to “Neta of the Ten Battles “ Neta was a nephew of Cagi. The Ogham Stone was used in the Ballyflanagan forge as a hob stone during the 1930’s until it was restored by Dr. Liam Price.

Dating between 350 – 550AD the stone was first discovered in 1854 by J.C.Twomey. This is one of the only Ogham Stones in Wicklow.

Wales has the most Ogham stones in the world.  They may be related to a clan known as the “Deisi” who colonised Wales from Ireland in the wake of the fall of the Roman Empire.  The alphabet used in Ogham consists of lines, dots and seems to be used to record names only.

J.C. Twomey, a teacher came around this area and he put his foot on an Ogham stone for a rest but then realised it was an Ogham Stone.

Until recently the Ogham Stone was in a very bad state but  then someone cleaned it up.

The Ogham script is also known as the Celtic true alphabet. Medieval scholars said that the letters were different kinds of trees names, but modern scholars argue about it.  There are 20 letters in the alphabet, it does not follow an order. It goes like this B,L,F,S,N,H,D,T,G,Q,M,G,NG,Z,R,A,O,W,E,I. They think Celts made the alphabet and named them after trees.

The reason it was named the Giant Stone by local people is because folklore says a giant threw the stone from the top of Castletimon and the marks in it are the marks of his fingers and nails. The hole in the bottom of the stone is said by others to be the mark of the Giants foot as he kicked it down the hill.

There is a standing stone below Castletimon Hill.  It is near the Castletimon Ogham Stone.  Most people thought for years that it was a cattle scratching stone but recently Chris Corlett from National Monuments came to study the stone and thinks that it is very ancient, even older than the Ogham Stone.  They think it was used for the same purpose as the Ogham Stone.  Probably used as a grave marker, or else a property marker or a meeting point for local people.

Dolmens mark burial places in a very distinctive way with large cap stones elevated at an angle and held up by huge standing stones.   They date from between 3,000BC and 2,000BC and may also have had ritual significance.

The stones now seen in dolmens have been originally covered in earthen mounds with the area below the capstone forming an entrance leading to the tomb proper.  Hence the correct name of a dolmen which is a Portal tomb.

The Castletimon Dolmen is locally known as “The Princess’s Grave” or “The Druids Alter”. It is thought to be the burial place of an important local woman.  It was first written about by J.C. Tuomey in 1854.  The legend has it that the mighty “Giant of Castletimon” slung the capstone at his brother giant on Ballinclea Hill but it fell short and landed in Brennan’s field, just across Potters River. The pillar stones were thrown back by the Ballinclea Giant and they also landed short beside the capstone.

The Ballybrack dolmen has been up for 4,000 years.  Everyone hopes it will stay up for another thousand years.  It is said by the locals to be the burial place of the soldier from World War One.  It is much more ancient than that.  It is unusual because it is in the middle of a housing estate. The capstone is over 2 metres inlength and approximately 2 metres wide.  The portal stones are about 1.5 metres high.

The Vertical or Roman waterwheel was invented by an engineer named Vitruvius sometime between 30BC and 10BC. There are three main types of water wheels, they are the undershot, breast shot and overshot wheels.

There was a chimney stack left at Brittas Mill in the 1940’s or 1950’s but that is gone now and there is just the bottom part of the chimney on the river bank now overgrown.

Because there were no tractors in those days and they had to bring the oats in sacks by horse and cart.  This was slow work so the farmers needed mills close by. Therefore there were a lot of mills close together.

All that is left at Castletimon Mill is part of the old Mill House which is now in Bonagrew Riding stables.

There were three mills on Potters River.  Barndarrig, Castletimon and Brittas Mills.

Barndarrig Mill was owned by Galvins and the buildings and water wheel are still there.