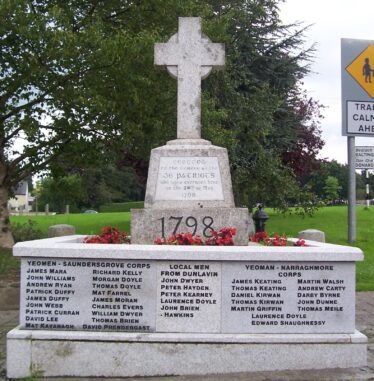 On 24 May 1798, thirty-six men were shot on the green [one survived], but there were also hangings at the market house that morning. The number executed that day is unclear (somewhere between forty-five and fifty). What is clear is that we have some sources and are fortunate to know the names of many of the victims. There were also other violent incidents in and around Dunlavin at this time (both fatal and non-fatal), some of which were probably never documented. However, a few of them were recorded, and I append them at the bottom of the list of the victims of the massacre.

Dunlavin 1798: naming the dead and injured.

The names of thirty-four men who were shot on the fairgreen were published in 1944.[1] They are as follows:

Of these, the two Doyles were farmers from the Rathbarn (Stratford-on-Slaney) area. Mat Farrel was also a farmer. One of the Doyles was also a sub-constable. The Duffy brothers were masons. Five of the men were servants of Morley Saunders and there was also a smith and a slater among them.

Of these, the two Keatings were masons and were definitely related. Martin Walsh was a nailor. Edward Shaughnessy, Andrew Carty and Darby Byrne were all labourers.

Laurence Doyle was a carpenter. John Dwyer, who had been in the market house for about four weeks, was a relation of rebel leader Michael Dwyer and probably a United Irish baronial delegate for county Wicklow. Peter Hayden’s family were republican sympathisers (if not before the massacre, certainly afterwards) and they helped Michael Dwyer later.

The Shearman Papers in NUI Maynooth also names thirty victims of that day.[2] They are:

Shearman provides extra names for victims, and given that thirty-six men were shot, the other victims were most probably those hanged at the market house after the shootings.

NAMES FROM OTHER SOURCES

Brien was captured on the day of the massacre. He fought under Darby Neill and Captain James O’Doherty in the Ballyshannon area. He was captured in the gravel pit at Narraghmore. He was taken to Dunlavin and was executed. He was survived by his mother. The fact that he was arrested individually and was not part of any of the groups of prisoners housed in the market house before the massacre may account for his name being omitted from both local folklore and Charles Dickson’s book.

Ironically, he was the spy who gave informa­tion leading to the arrests of the Saundersgrove yeomen in the first place. The fact that he was an informer would certainly have led to his name being deliberately omitted from the local folk-memory. It seems that the order was to execute in groups of five, and finding that one group had only four men, the spy Hawkins, who had already given information leading to the arrests, was forcibly compelled to take his place in the group of four to make up five, and was executed with them.

These lists contain some degree of overlap, but it is certain that more than thirty-six prisoners were executed. The total number of named victims now rises to fifty-two allowing for different Christian names, but some (e.g. Shearman’s Peter Prendergast and Dickson’s David Prendergast) are evidently the same men. However it seems safe to assume that the death toll in the village that day must be revised to a figure somewhere in the mid-forties at least. The probable total is somewhere between forty-five and fifty.

By December, Michael Dwyer’s campaign if guerrilla warfare was well under way in the mountains… but that’s another story.