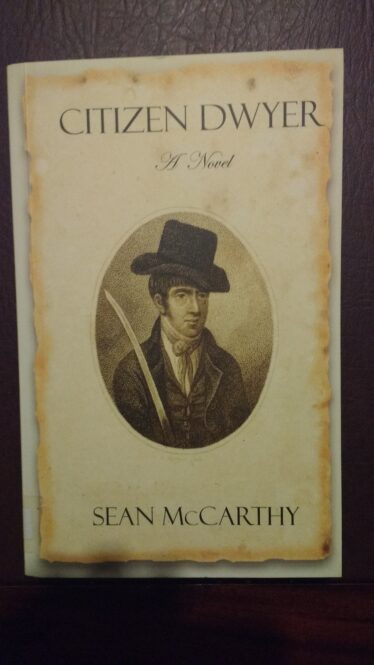 This is a book review I did of a historical novel called ‘Citizen Dwyer’ by Sean McCarthy. I personally enjoyed it very much. The book can be ordered online (just do a Google search) and deals with the life of Michael Dwyer, the 1798 rebel who held out in and around the mountains of Dunlavin-Donard-Davidstown parish until December 1803.

Novel based on the life of Michael Dwyer

‘Citizen Dwyer’ (published in 2011) is a novel by Sean McCarthy, which follows the adventurous and torturous life of the renowned rebel leader Michael Dwyer. Sean McCarthy, the author of works such as ‘When Jolie met Christie’, is a playwright and novelist, who has also written for television, and his new novel has all the ingredients necessary to make it a historical blockbuster. McCarthy evidently did much research into the period spanning the late eighteenth and early nineteenth centuries. He skillfully recreates the atmosphere of the time, capturing both the worlds of the powerful elite and the downtrodden masses very well. He paints excellent pictures in words of Ireland and Australia – both of which are utterly believable and neither of which is easily forgotten.

McCarthy’s writing skills do not stop there however, as he has successfully endowed his characters with credible traits and motives for their actions – in short, he has breathed life into characters who lived two centuries ago. The story of Michael Dwyer is gradually revealed, starting in Wicklow and taking the reader through the turbulent years of the 1798 rebellion and its aftermath, when Dwyer and his band of rebels successfully resisted Crown forces in the Wicklow Mountains for over five years. The dialogue between the principal characters, such as Dwyer and Hugh Vesty Byrne, is pithy, earthy and plausible, adding tremendously to the pleasure of reading a good story well told.

The storyline moves on and the action switches to Australia, a raw and vibrant penal colony, following Dwyer’s cessation of military operations and his transportation to the new land. This part of the novel follows Dwyer’s many Australian adventures, and his battle with his increasing reliance on alcohol. Dwyer’s inner demons are laid bare as the plot unfolds, and perhaps McCarthy’s greatest triumph is his depiction of Dwyer as a man at war with himself; a man who has sought and eventually gained freedom – from everybody but himself. There is no doubt that this novel works very well at the human as well as the historical level. Dwyer’s story becomes part of a greater literary mechanism – the struggle of man against his own weakness and his inability to escape from himself – and ‘Citizen Dwyer’ portrays this aspect of the human condition every bit as skilfully as it places Michael Dwyer in the context of the historical backdrop of his times.

The book is published in Dublin by New Island books, with support from the Arts Council. It is an attractive paperback of 354 pages, which captures the imagination of the reader, and should be on the wish-list of anyone with an interest in the period, in Irish history generally, in County Wicklow – or just with an interest in the pleasure of reading a good book with a fine storyline and a depth of insight into the human condition. I heartily recommend it to everyone, and wish it every success.