You are here: HomenextPlacesnextBALTINGLASSnextHumewood Castle: There is nothing new about "cost over-runs"!

Humewood Castle: There is nothing new about "cost over-runs"! 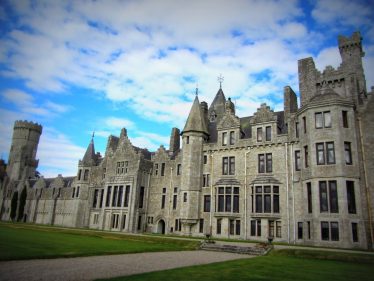 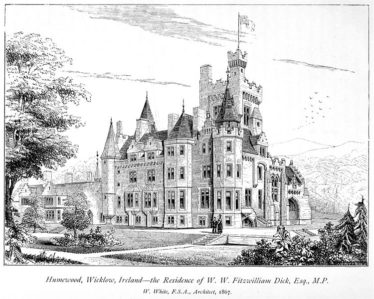 Recently I walked up Keadeen, an impressive looking mountain of 653 M, complete with a passage grave on top and great view over the Brusselstown Hill Fort and back to the Lugnaqullla Massif. Heading down to the next summit we passed a spot, cheerfully described on the  East West map as “cairn marking gibbeting of Moore (murdered Hume)”. Below us the lake at Humewood Castle [Kiltegan] shimmered in the sun, and my thoughts turned to the fascinating story of the building of this Gothic Fantasy mansion, built in south west Wicklow as a country retreat for the summer and shooting season.

The Hume family arrived in Ireland in the fifteenth century, and built a castle at Kiltegan. During the turbulent times of 1798, local man Michael Dwyer was a key figure in the rebellion, and indeed escaped arrest by the crown forces in a little thatched cottage below Keadeen, now known as “Dwyer McAllister Cottage” and worth a visit. Michael Dwyer eventually surrendered to Captain Hume in a field close to Humewood in 1803 and was brought to Dublin then sent to Australia, where he lived out his life. Presumably Moore was hanged on a gibbet on top of the mountain as a stark warning to rebels..

In 1868  W.W.F Dick (formerly Hume, having taken the surname Dick for legacy purposes) MP for Wicklow, commissioned this remarkable country house. This was designed by William White, described by historian Mark Bence Jones as ” a brilliant but cranky many-sided genius who ended his days trying to prove that Shakespeare was Bacon”. He was a little careless with costs however, as the original brief was a house that would cost no more than £15,000 (£1.8 million) but it ended up costing an additional £10,000 or 1.2 million. This led to a celebrated court case between the architect and the builder Albert Kimberley, which was won by the builder and White ended up bankrupt as a result.

The house itself is a a fantastic creation, and extends to over 30,000 sq ft  (there are 44,000 sq ft in an acre) and it incorporates towers, turrets,  and battlements made from granite. The principal rooms are on the first floor – partly to keep the house dry and partly for defensive reasons as this was the year of the Fenian uprising and security was a concern. The adjoining courtyards are similarly finished and the entire pile is surrounded with a demesne of over 400 acres.

The last of the Hume family to live here was Mimi Hume Weygand, who lived most of her life in France, but returned to Kiltegan every year until her death in 1992. Shortly before she died, she made most of the estate cottages over to her tenants. The estate was then put on the market and was bought for a sum believed to be less than a million pounds. The purchaser was  Renata Coleman who ran it as a private hotel with its own polo grounds and duck shoot, extending the lakes  A  furniture and contents auction took place at Humewood in 1992, clearing the contents of 120 years, and attracting huge numbers. I was lucky enough to attend the viewing and auction, and witness the end of an era in Kiltegan. Ronnie Wood of the Rolling Stones who lived nearby at the time, bought the top lot. Even the country house jumble on display in the yard made big money, with local people being keen to secure something from the estate before it all dispersed. 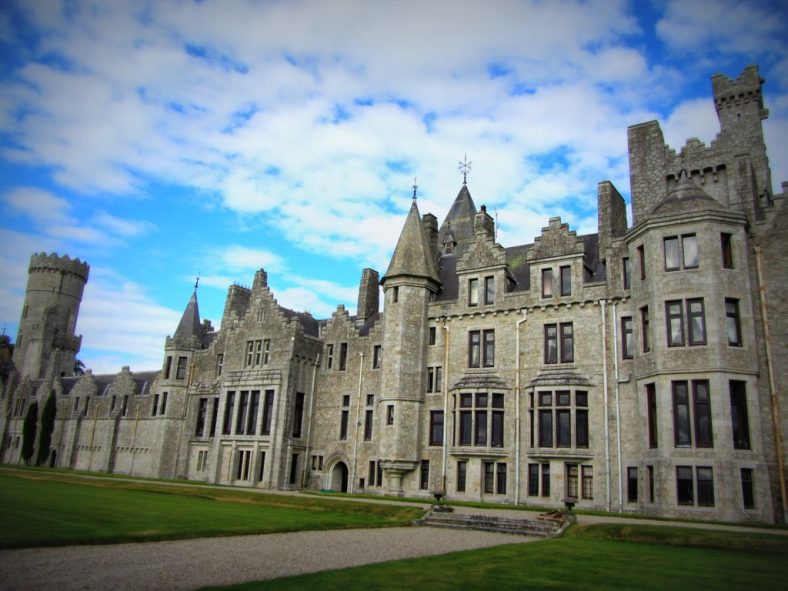 The house was magnificent inside with large bright rooms giving views over the lake, and was in pretty good condition. I particularly remember the Banqueting Hall/ballroom and the domestic offices in the basement – in the Housekeeper’s sitting room there was a large calendar featuring Daniel O’Donnell!

Renata Coleman subsequently sold the property to John Lally for a figure believed to be €16 million to be further developed as a luxury hotel, but this plan was shelved due to the downturn and it was sold on to  John Malone for a reported figure of €8 million. Mr Malone  made a significant fortune from the telecoms industry and apparently has spent “north of €50 million” on the restoration of Humewood.  This was very specialised work overseen by architects Henry J Lyons which picked up a special award from the Royal Institute of the Architects of Ireland.

While the gates of Humewood are closed, and the security cameras are no doubt switched on, a visit to Kiltegan is recommended. Its a pretty little place, and a typical Estate village with a line of lovely houses and a St Peters Church of Ireland where the Hume family mausoleum can be found. Kiltegan also had its moment of glory in 1973, becoming the overall winner of the Tidy Towns Competition!

Published on 11th February 2019, for more follow Dairine Nuttall on her blog at IrishTourGuide