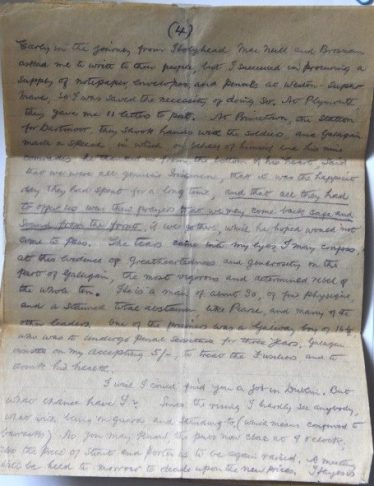 Transcript of a letter written by Private John O’Brien, Royal Dublin Fusiliers to his friend, Christopher Clohessy, Midleton, Co Cork. John O’Brien was born in Conna Co Cork. Enlisted in the British army in Carrigtwohill, Co Cork. Killed in action in the Somme on 13th November 1916 five months after this letter was written. Commemorated on Thiepval Memorial.

I am at present on guard at the Magazine Fort in Phoenix Park so take the opportunity of replying to your letter received a day or two ago. This is a 24 hour job. We arrived here about 10 o’clock this morning and are to be relieved about the same hour tomorrow morning. I am writing this in one of the 4 turrets — there is a turret at each corner of the fort, you may have noticed — during the intervals of watching out for the King’s enemies, this is the grandest place in the world, the park I mean. As far as I can see there are tents, where soldiers from Wales or from God fearing England are singing hymns. The weather is perfect, the park is lovely, the Dublin mountains are in sight and the beer is alright, so what more can a reasonable man want. I really feel that I shall suffocate if ever I return to London.

I am glad you enjoyed your stay in Dripsey. I am sorry I could not have remained longer. I had a pleasant time during the short journey from Dripsey to Cork. Your friends being very agreeable and quite attentive. The good natured poor old lady insisted on taking me into a restaurant on arrival in Cork, treating me to a good meal and fetching from a neighbouring public house no less than 3 bottles of stout. I would love to be shifted down to Cork or Aghada, lovely though it is here around Dublin.

I shall never forget that trip to Dartmoor, nor the ten interesting prisoners we had to escort. We met them at North Wall, forming up outside the “Black Maria” where they were huddled together. We were the only passengers on the boat — a cargo boat.

However, it contained cabins just like a North Wall L.& N.W. boat, so it must have been specially chartered for us. The prisoners were in the inner cabin outside the door of which we in turn had to mount guard. After getting under weigh conversation with the Sinn Feiners soon commenced and not very long after that we all became friends and Galligan the man who commanded the rebels in Wexford suggested a concert and constituted himself master of ceremonies. He wrote all the names in a book and called them out in turn. Brosnan, a tall handsome young fellow from Castlegregory commenced with “The West’s Awake” which he sang splendidly laying special emphasis on “let England quake”

Soon Sin Feiners and Dublin Fusiliers were vieing with one another, singing song for song and all delighted with themselves. Galligan himself did not sing, but recited a masterpiece of high treason and sedition as well as of brilliant satire. It was entitled “Queen Victoria’s Jubilee”.

On reaching Holyhead we made ourselves comfortable in the train and fraternised as before. I was so busy in arguing and discoursing and telling yarns with Mac Neil Galligan and Slattery — the Garryowen footballer and Cambridge University man sentenced to death but reprieved owing to severe wounds and the outcry in America against any further executions — that I did not do much duty between Holyhead and Dartmoor. However the duty was not of much consequences, merely consisting of standing in the corridor outside the carriage where the prisoners were. Slattery was a member or probable a frequent visitor to the union of the Four Provinces. Galligan gave me a religious medal as a souvenir, John Mac Neil his last farthing which he had received from his little son before he left. I still have both.

Dealing with the rebellion, they say that they had information leading them to believe that their arms were to be seized, that the arms were their own and that they were determined to resist disarment (is this spelling correct) to the death. At any rate there was no sign of repentance among the 10 prisoners. Poor Mac Neil seemed sad at first having only just parted from his wife and 8 children, but soon cheered up when he found that the members of the escort party were Irish — as Irish as himself.

Early in the journey from Holyhead Mac Neil and Brosnan asked me to write to their people, but I succeded in procuring a supply of notepaper, envelopes and pencils at Weston Super Mare, so I was saved the necessity of doing so. At Plymouth they gave me 11 letters to post. At Princetown, the station for Dartmoor they shook hands with the soldiers and Galligan made a speech in which, on behalf of himself and his nine comrades he thanked us from the bottom of his heart said that we were all genuine Irishmen, that it was the happiest day they had spent for a long time, and all they had to offer us was their prayers that we may come back safe and  sound from the front, if we go there, which he hoped would not come to pass. The tears came into my eyes I may confess at the evidence of greatheartedness and generosity on the part of Galligan the most vigorous and determined rebel of the whole ten. He is a man of about 30 of fine physique and a staunch total abstainer, like Pearse and many of the other leaders. One of the prisoners was a Galway boy of 161/2 who was to undergo penal servitude for three years. Galligan insisted on my accepting 5/- to treat the Fusiliers and to drink his health.

I wish I could find you a job in Dublin but what chance have I? Since the rising I hardly see anyone what with being on guard and standing to (which means confined to barracks). So you may know the pubs now close at 8 o’clock. Also the price of stout and porter is to be again raised. A meeting will be held tomorrow to decide upon the new price. Hayes is about the only man I know who may be able to secure you a situation.

The first batch of 100 Fusiliers went away yesterday to Kilbride to fire their course usually regarded as the last stage of training. Were it not for the rising we should all probably be at the front, whereas we haven’t improved a bit or learnt a bit since Easter Monday.

Has Lar Daly gone back yet? Ask him to call and see me if passing through Dublin. I should like to have a few words with a Munster and Leinster bank clerk who was for 6 months in Midleton. I didn’t know his name. In fact out of the 17 here 5 are Corkmen and 1 a Kerryman.

I must conclude now as I have a few more letters to write.. I hope you are quite well.

P.S. I saw Jim Green when in London; also Alice and Tess. All three were at Euston to see us off. John