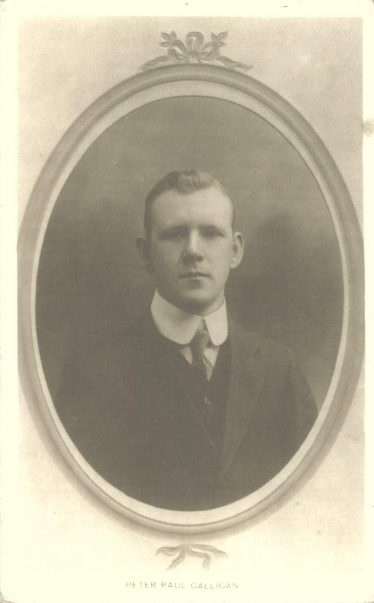 Born on 20 June 1888 in Carrigallen, Co. Leitrim, Galligan attended school at St. Patrick’s in Cavan. He went to Dublin in 1907 to serve his time as a draper and joined the I.R.B. in 1910. He joined the Irish Volunteers after its formation in 1913. He took part in the Howth gun running in 1914 and was later appointed Captain of G Company 2nd Battalion Dublin Brigade. Robert Monteith of Wicklow and Ned Daly (1916 Leader) were among his superiors at this time. He was on guard duty at O’Donovan Rossa’s funeral in 1915 while a staff officer to Thomas McDonagh who was then Director of Training.

After a dispute within the Enniscorthy Volunteers in 1915, Galligan took charge of the advanced training of the unit who were considered to be the finest in Co. Wexford. There he took up a job in Bolger’s Drapery.

On Easter Saturday he travelled to Dublin to get clarification from the leaders due to the confusion whether the Rising would take place or not. On Easter Monday he was instructed by James Connolly to go back to Enniscorthy and hold the railway line to hinder the transport of British troops potentially arriving from Wexford.

After the surrender of the Enniscorthy Volunteers (one of the last in the country), Galligan was subsequently arrested and sentenced to five years penal servitude. He was interned in Dartmoor prison in England together with Eamon De Valera, Thomas Ashe and Eoin McNeill, all in solitary confinement. Later he served in Lewes Jail and then in Parkhurst before being released in 1917.