You are here: HomenextPlacesnextBLESSINGTONnextWool & Weaving in the Kings River Valley 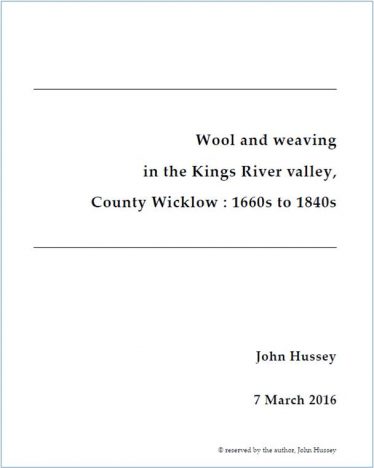 In the late 1600s, a Quaker community settled at Baltyboys in the Kings River valley, County Wicklow, Ireland. The Quakers resurrected wool production in the valley and managed its supply to the Dublin weaving trade. In the early 1700s, Dublin’s weaving industry began a process of moving from the city to rural locations, a process which was termed ‘rustication’. One location to which the weaving industry rusticated was the area around Baltyboys, where its Quaker community commenced carding and spinning operations and, at a later date, weaving operations. Over time, other industrialists became involved in addition to the Quakers, and as the weaving process became more industrialised tuck mills and warping mills were built.
Although the industry survived the United Irish Rebellion of 1798, little if any further investment took place during the early decades of the 1800s and this led to the death of the local weaving industry around 1840.

Author details: John Hussey has degrees in Geography and in Civil & Environmental Engineering from Trinity College, Dublin. His research in the area of historical geography has focused on west Wicklow, examining its human settlement and its industry, including its Quaker community and its granite quarrying and weaving industries. Details of John Hussey’s publications are at http://blessington.jimdo.com/ and at http://wicklowgranitequarries.jimdo.com/author/