In advance of the development of a playground at Merrymeeting, Rathnew, Co. Wicklow archaeological testing and desk based research was carried out by Yvonne Whitty under licence on the 6th and 7th May 2015 as requested by Wicklow County Council.

The proposed playground is located in an area of archaeological significance in the village of Rathnew in the townland of Merrymeeting. The adjoining townland to Merrymeeting is Commons. where the remains of a medieval church site and associated features are located.

The village of Rathnew would have developed around Commons where the remains of the medieval church, graveyard and font are located (WI025-010001-3). Commons townland is roughly ‘D-shaped’ in plan and this boundary may represent an earlier enclosure associated with the church site (Figure 1). 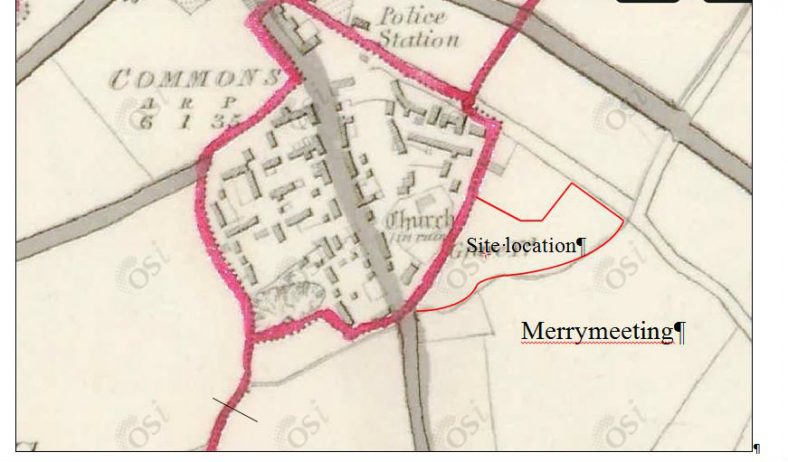 The church and graveyard are situated on level ground overlooking a sharp drop to the southwest (WI025-010001-2). All that survives of the church today is the eastern gable, 1.5m in height, 18m in width and 0.85m in thickness. The church is traditionally associated with St Ernin (Ronan 1928, 139-40), and lies towards the northern end of an oval graveyard which encompasses an area 50m by 40m. Eighteenth and nineteenth century headstones line the perimeter of the graveyard (WI025-010003). There is a granite font beside the E gable of church (WI025-010002). 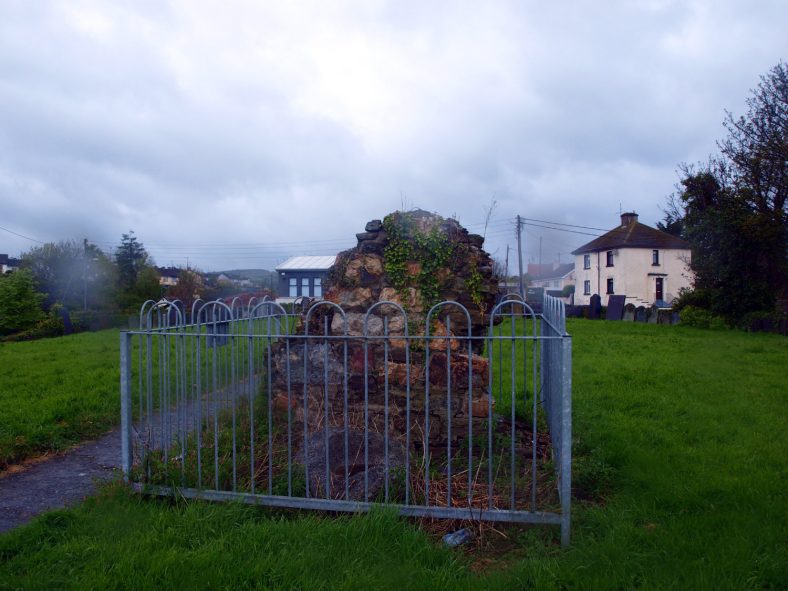 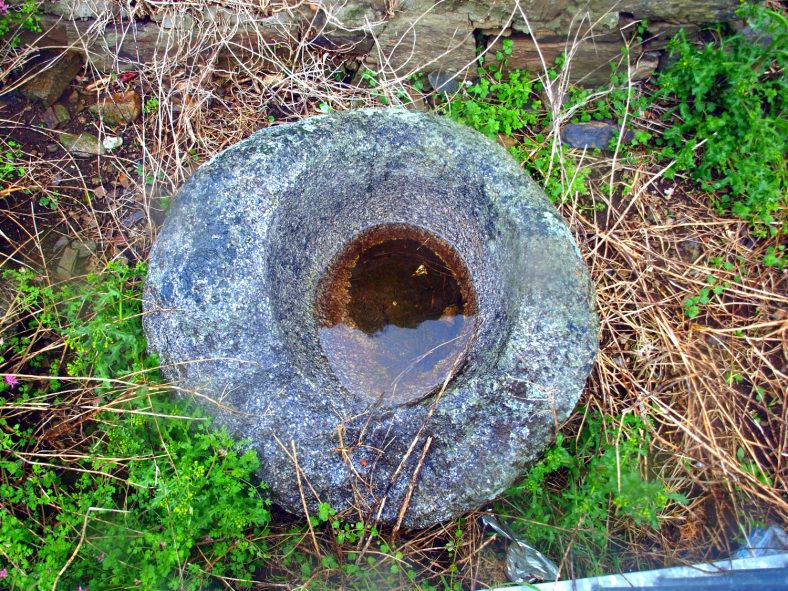 The church and graveyard in Rathnew village date to the Medieval period which began around 500 AD. This was a time of massive social change with the arrival of Christianity the new and soon to be dominant religion. Little is known about the early history of the Irish church. By the first half of the fifth century there was a significant Christian community living in Ireland. In the year 431 the bishop Palladius was sent by Pope Celestine to the “Christians in Ireland”. (Edwards 1999, 99, Charles-Edwards 2000, 182). Christianity quickly took hold and the process of full conversion was complete by the seventh century.

Early Medieval Activity in The Area

There is significant evidence for Early Medieval activity at Rathnew and the main person associated with Rathnew is Saint Ernin who was a studied at Clonmacnoise. He also founded another church at Portmarnock in Dublin (Ronan, 1928 p.140). He is reputed to have had another church at Cell Draighneach in Ui Drona and Kilfernoc in Ballynerrin was also believed to be one of his churches.

The death of Saint Ernine is recorded in 635 AD in the Annals of Ulster. There is a story that when St Columba visited Clonmacnoise he touched the saint’s garment and was blessed by him (Price, 1935 p.416.). The land arrangement of the townland of Commons suggests that it preserves an early land division associated with the church of Saint Ernin from at least the medieval period. The feast day of Saint Ernin is the 18th August (O’Donovan & O’Flanagan, 1928).

In the surrounding landscape there is further significant evidence for Early Medieval activity possibly contemporary with Saint Ernin’s church 800m to the southeast of Rathnew village. This church site, known as Drumkay was located during the excavation of the Port Road. Drumkay church and cemetery site which contained 191 burials dated from the Early Medieval period (AD 600-1100) up until AD 1600. Ronan mentions that Drumkay was the church of St. Berchan which was founded in the c.AD 600-800 (1928, p.132-155).

There is also references to another church, that once was present at the entrance to Tinakilly House in the townland of Tinakelly or Tigh na Cille “the House of the Church” adjacent to the village of Rathnew (O’Donovan & O’Flanagan, 1928.). The church was located at the entrance avenue to Tinakilly House, a stone trough resembling a baptismal font was also described at this location.

Given the archaeologically sensitive location of the proposed development in the field metres from Saint Ernin’s Church test trenching was carried out to establish if the archaeology extended beyond the confines of the existing wall of the graveyard.

The purpose of the test trenching and assessment was to secure the preservation in situ of archaeological sites, and to ensure that the playground development is located/designed in such a way as to minimise any potential impacts on archaeological remains.

In order to identify if there was archaeology on the site of the development, a total of thirteen test trenches were excavated across the site. 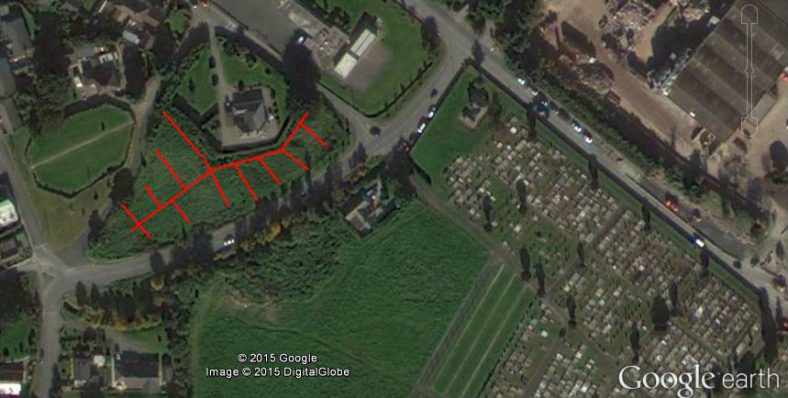 There was no evidence of archaeological features or burials associated with the medieval church site and given the natural ground is a compact shale bedrock which is approximately 1m lower than the graveyard this was un-surprising. However although there were no features or burials exposed with the church and graveyard associated with St Ernin who died in AD 635 archaeology was exposed which indicates that this landscape has been occupied since at least the Bronze Age (2500 – 600 BC).

Burnt mounds are typically located near a stream or in marshy ground and comprise a crescent-shaped mound made up of small pieces of shattered stone and charcoal rich soil (Stout 1994). A trough was excavated firstly next to a source of running water, near a natural spring or where the drainage is very poor, as is the case at Merrymeeting. The trough was sometimes lined with wood or clay to hold the water, the trough at Merrymeeting was lined with wood. Stones were then heated nearby and added to the water to boil it. Various interpretations have been put forward for the use of these burnt mound sites- form cooking, bathing, dyeing or industrial activity as the primary purpose of these sites was to boil water.

The typical crescent shaped mound was formed after the waste material from the trough (the heat-fractured stone and charcoal-rich soil) was removed after their working cycle was completed. Limited testing of the trough at the site under discussion revealed that the base of the trough was wood lined.

There are often other archaeological features associated with these sites as is the case at Merrymeeting where the curve linear ditch, trough and deposits were exposed in close proximity to the spread of burnt mound material was exposed (Plates 3 and 4). 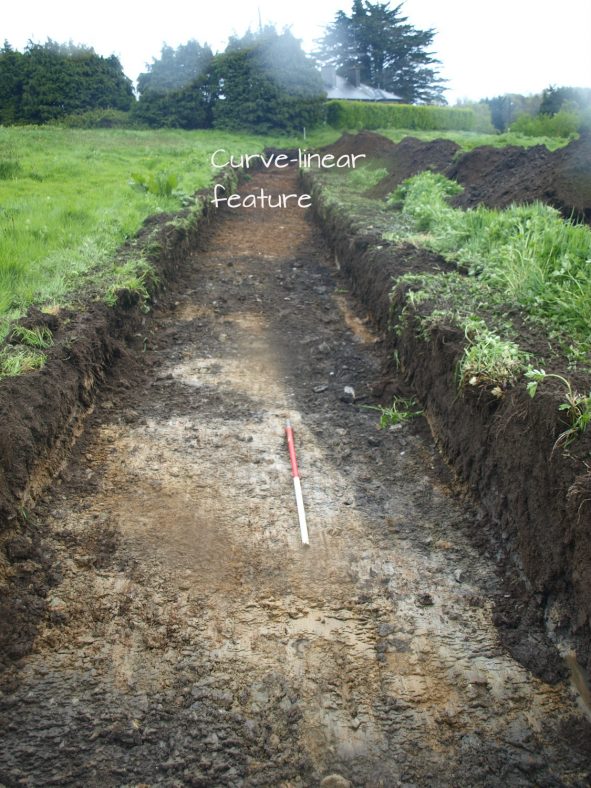 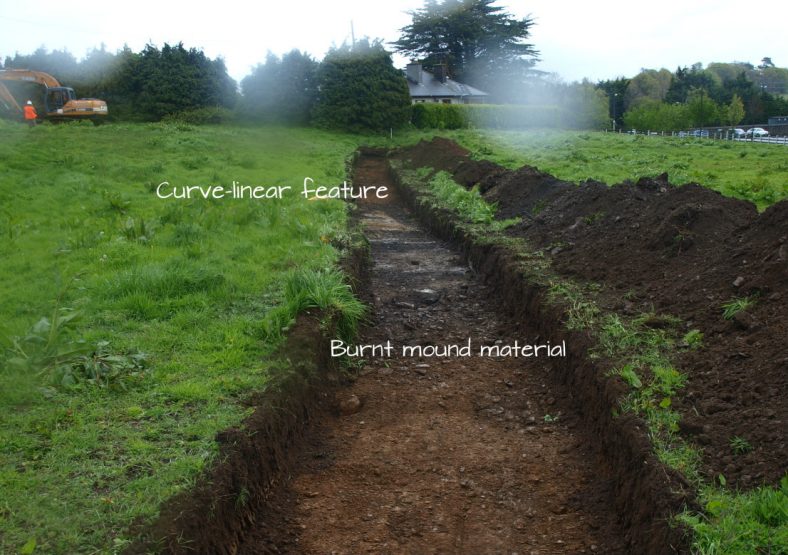 O’ Flanagan, Rev. M., (Complier) 1928. Letters containing information relative to the antiquities of the county of Wicklow collected during the progress of the Ordnance Survey in 1838. Bray: Typescript.

Smyth, A., 1994. ‘Kings, Saints and Sagas.’ In: K. Hannigan and W. Nolan, eds. Wickow History and Society. Interdisciplinary Essays on the History of an Irish County. Dublin: Geography Publications. pp.41-111.