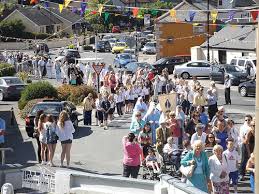 An integral part of the rich history and heritage of Rathnew village is the annual Corpus Christi Procession.

In June of 1914 as the conflict known as the ‘war to end all wars’ would engulf an unsuspecting world when two shots rang out in Sarajevo, the newly formed Rathnew corps of the National Volunteers marched to the 1798 monument in Wicklow and back to the village. The small village church was newly renovated and featured three new stained glass windows, and was richly decorated inside and outside. Evergreen arches spanned the street of the spick and span ancient settlement site. The ladies of the Rathnew Altar Society had a splendid show of flowers on display.

The ladies of the Rathnew Altar Society had a splendid show of flowers on display.

At six in the evening a procession began led by the Rathnew Fife and Drum band featuring the local clergy, schoolchildren, Children of Mary, visitors and locals to an open altar in the middle of a field. The band played hymnal music and the Rosary was recited. Benediction followed and the procession returned to the church. So began a tradition which, unlike that of the county town, survives to this day.

The procession of 1915 took place in excellent weather and huge crowds attended. The village was spotless and richly decorated. Some of the inscriptions attached to the decorations called for blessings upon villagers, clergy, and their own relatives fighting on the front, in the mud and blood filled trenches of Europe. The procession began at six o clock on a June evening led by the National Foresters Band, Wicklow and the village band. Religious ceremonies were led by Canon Staples P.P. and Rev. Cogan C.C. Benediction was delivered in the open field adjoining the railway. The Procession then returned to the church.

In 1916 six priests heard confession the weekend before the procession took place, there was a large attendance in the richly decorated and clean village. At four o clock the Wicklow Foresters Band led the procession to the open air site where the ceremonies took place.

Crowds attending the procession had grown considerably by 1917 when the estimated figure was 3,000. The weather was perfect as Canon Staples and Rev. Cogan led the ceremonies. Wicklow and Rathnew Bands took part. The Children of Mary sang as the De La Salle brothers carried the canopy above the Monstrance. Evergreen decorations, whitewashed houses and walls, and spotlessly clean roads and streets were again a feature of what was becoming an annual event.

The 1918 procession took place on a Thursday evening in June, large crowds attended and the route was richly decorated. Wicklow and Rathnew bands led the procession. Rev. Cogan led the clergy and following on were record numbers from outside areas, the largest seen to date. After the ceremonies concluded the procession returned to the church. The village was again beautifully decorated and clean.

Evergreen decorations, whitewashed houses and walls, and spotlessly clean roads and streets were again a feature of what was becoming an annual event.

In the various papers of 1919 there was no mention of a procession taking place in the village, weather may have played a part in this. The Wicklow People of June 1919 did however confirm the rumours that the Rathnew police station, (now Dowling’s shop) was to close. It was opened in 1878. One constable was to remain in the area as a ‘Village policeman.’

The 1920 June Procession in Rathnew showed that it was growing in popularity around the county, evident by the massive crowds attending in marvelous weather. There were some 2,000 participants and hundreds more lined the route. The Altar Society had decorated the altar which was outside the church. 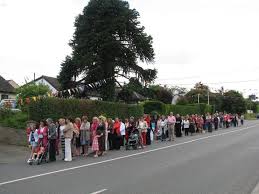 The route was enlarged this year and encircled the entire village. It proceeded along the Glenealy road to Mr. Byrne’s field where a temporary altar had been erected. The front of the procession was in the field before the clergy had left the church. The two regular bands were augmented by the appearance of the Ashford Pipers band. The Pioneer Society marched with the Children of Mary and due to the political turmoil and fighting, a prayer for Ireland was included.

In open air events there is always the possibility that the weather will be a spoilsport and this was the case for the 1921 Procession. It could not be held, Benediction was offered in the church the following Tuesday however, and a procession then took place. The village was tidy, decorated, and rich with a variety of flowers in bloom. These featured on the open air altar with lighted candles, in a field adjoining the church. A large crowd was evident with choirs from Wicklow and Rathnew as well as bands. Canon Staples P.P. and Rev. Cogan C.C. led the ceremonies.

3,000 men, women, and children took part in the 1922 Procession to Mr. Byrne’s field. The village was well decorated and tidy. Both bands took part in providing Hymnal music. A new feature was the detachment of I.R.A. under the command of Captain Louth bringing up the rear of the procession. This was the largest attended procession yet.

On a June Sunday in 1923 the Procession took place and it was fast becoming a meeting place for people all across the county. The condition of the village was a credit to the locals. The church was beautifully decorated and the Civic Guard in their first duty of this kind had a difficult time controlling heavy traffic. Huge crowds took part and listened to the bands and choirs, benediction followed at the open air altar. Rathnew children had made their communion on the previous Sunday. 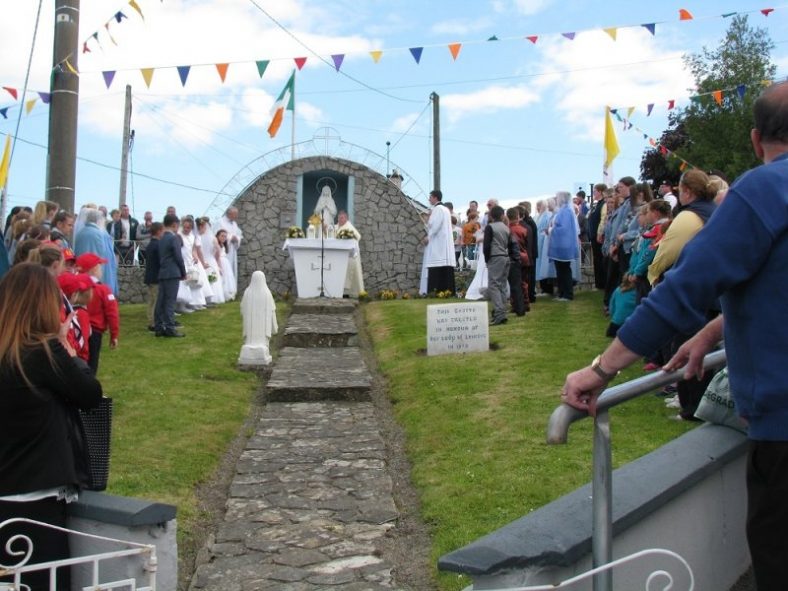 The largest crowd ever seen thronged through the village in June 1924 and was estimated at between 8-10,000 people. Those numbers included a large ‘temperance excursion’ from Dublin. The village was packed and traffic was a nightmare for the Civic Guards. Rev. Fr. Hoey P.P. and Rev. Cogan C.C. led the ceremonies. The Carriglea Band joined with the temperance excursionists in the field. Benediction and prayers followed and the Procession went back to the church. Thus ended the first decade of existence for what is now an important tradition and heritage for the villagers. The Corpus Christi Procession in Rathnew.