Sir Roger Casement: The Man and The Myths 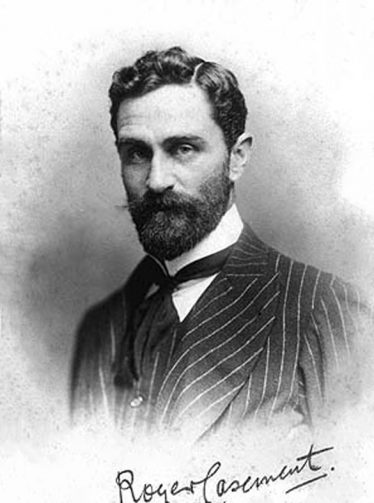 Roger Casement Lecture: Rathdrum Historical Society will present a lecture by Angus Mitchell on  Monday, 13th June in Avondale Community College at 8 pm. All are welcome.

Roger Casement, the last of the 1916 leaders to be executed, occupies a strange place in Irish history. Within five years of having been knighted by King George V in 1911 Roger Casement was tried for treason, found guilty and executed on 3 August 1916, the last of the leaders of the Easter Rising to be executed. What had brought this ‘complex personality’ as Casement has been described by President Michael D Higgins, at the recent commemorations at Banna Strand, Kerry, from being hailed by the British establishment as a great humanitarian for exposing abuse of the indigenous people of the Upper Congo in Africa and in Peru to his death in the cause of Irish freedom and independence?

All will be revealed when Angus Mitchell, historian and cultural critic, based in the Kemmy  Business School, University of Limerick, will give a talk to the Rathdrum Historical Society entitled ‘Roger Casement: between history and mystery’ on Monday 13th June in Avondale Community College at 8 pm.

Dr. Mitchell is the leading authority on Casement having researched and studied the life and legacy of this Irishman, even travelling widely on the Amazon, visiting places where Casement lived while British Consul General in Brazil. He edited The Amazon Journal of Roger Casement in 1997. He followed this in 2003 with a second volume Sir Roger Casement’s Heart of Darkness; The 1911 Documents. These editions brought Casement’s role as a human rights activist and champion back into the public imagination where the question of the veracity of the infamous Black Diaries had taken hold in 1916 and have been of considerable interest ever since.

The publication of Casement’s biography, 16 Lives: Roger Casement in 2013 highlights his uniqueness among the 1916 rebel leaders. From colonial diplomat, knighted by the realm to strategist for the Irish rebel cause; recruitment of the Irish Volunteers and his involvement in organising the Howth gun running, Mitchell has penned a fascinating insight into this ‘complex personality’

The final tragic chapter in Casement’s life, his sojurn in Germany to raise an Irish regiment and guns for the rising, his capture at Banna Strand and subsequent trial and execution in London have been captured for eternity in Casement’s own words in his diary, now edited and published by Mitchell in One Bold Deed of Open Treason: The Berlin Diary of Roger Casement, 1914-1916. Casement’s own words summed up his belief in the cause he followed: ‘The faculty of preserving through centuries of misery the remembrance of lost liberty, – this surely is the noblest cause ever man strove for, ever lived for, ever died for.’

As part of the 1916 commemorations Dr. Mitchell has been giving talks and presentations on Casement throughout the country. Rathdrum Historical Society is particularly pleased and proud that Dr. Mitchell has agreed to come to Rathdrum to highlight the many faceted career of this passionate idealist and, above all courageous Irishman who had family connections with Croneroe, Ashford, now Belair Hotel

All are welcome to attend this much looked forward to presentation on Monday 13th June at 8 pm in Avondale Community College.