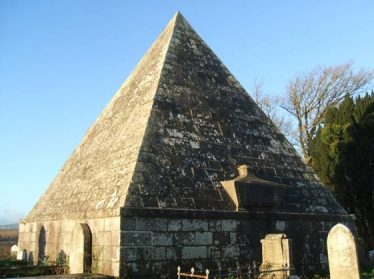 Sitting on a small rise a mile north of Arklow, overlooking the river Avoca, is a monument described by John Betjeman as the largest pyramid tomb ‘beyond the banks of the Nile’. It stands on the highest position in the ancient cemetery of Kilbride, dwarfing the ruins of the adjacent medieval church, and is easily seen from most points within a two-mile radius.

When Ralph Howard of Shelton Abbey was made 1st Viscount Wicklow in 1785, he decided that no longer would a departed Howard be buried in cold clay; their bodies would be housed in an edifice more befitting aristocracy. Philosophical Enlightenment was at its height and to speak of Egyptian, Athenian or Roman architecture was to display not only education but good taste. The new mausoleum, Howard decided, would be a pyramid.

The design is believed to be the work of an English sculptor and stonecutter, Simon Vierpyl (c. 1725–1810). Vierpyl was well acquainted with Enlightenment taste having spent almost a decade in Rome producing souvenir copies of ancient sculpture for the well-heeled on their Grand Tour. He was brought to Ireland by James Caulfield, 4th Viscount Charlemont (1728–99), and soon became known for his designs based on ancient civilisations. He worked closely with architect William Chambers on Castletown House, Charlemont House in Rutland (now Parnell) Square in Dublin, and the Casino at Marino. According to The dictionary of Irish architects (http://www.dia.ie/architects/view/5439) he appears to ‘have done relatively little purely sculptural work’ in Ireland, being employed chiefly as a stone-carver, mason and clerk of works. The Howard mausoleum does not appear in the list of works accredited to him.

The pyramid’s outer cladding is granite blocks. The base is approximately twenty-seven feet square, the walls are perpendicular to the height of six feet, at which level the slopes begin, meeting at the pinnacle some thirty feet above ground level. A sarcophagus on the north side records that the monument was erected in memory of an earlier Howard and as a place of burial for the family. North of the pyramid is a small Egyptian-style structure with a temple front that is often taken for part of the mausoleum, but this leads to a second chamber that houses a minor branch of the Howard family.

Access to the inside of the pyramid was gained by a small door in the north wall — now sealed — from which a narrow corridor of about eight or nine feet leads to a chamber ten feet square. This has a curved brick roof, about fifteen feet from the floor at its highest point. The wall facing the short corridor and the walls to the right and left each contain nine niches for coffins, three rows of three.

The coffins were inserted lengthwise so that each niche opening is only two feet six inches square, receding about seven feet. A slab, on which the biographical details of the interred were carved as on ordinary headstones, was fitted to seal the niche. The fourth wall has only six niches, three placed vertically either side of the chamber entrance, making a total of thirty-three coffin spaces in all — masonic symbolism or just a handy number? The strange thing is, only eighteen are occupied.

The first interment was of Ralph Howard’s daughter Isabella. She was nineteen when she died in December 1784. As the pyramid was not built until the following year, it is reasonable to assume that Isabella was buried in the graveyard and re-interred in the mausoleum when it was ready. The last interment of which we have a record took place in 1823, but folklore states that there was another. For weeks following the interment of an infant family member, tenants living at Kilbride reported the sound of a child crying at night. The body was, we are told, removed and interred elsewhere after which the crying is said to have stopped. The pyramid was sealed and never used again.