You are here: HomenextPeoplenextComrade and Chemist: Howard Colman Rowe Of Arklow 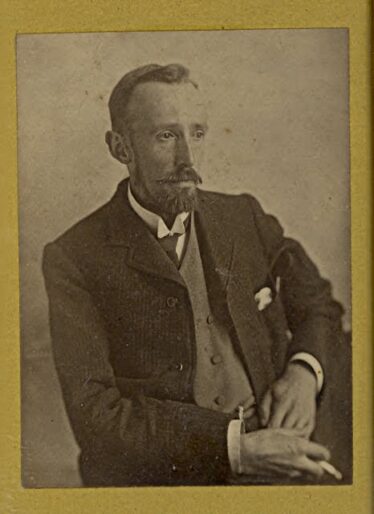 In late August 1897 the Wicklow Newsletter carried notification of the opening of a new business enterprise in Arklow. The proprietor of the New Medical Hall, twenty-eight year old pharmaceutical chemist H C Rowe, announced himself as having ‘many years’ experience in Dublin, Manchester, Bristol, Cardiff, &c.’ A little later he would woo potential farming customers with a claim of equally lengthy service in counties Meath, Kildare, Cheshire ‘and other great Horse and Cattle Centres.’ While the new young chemist may have slightly exaggerated his curriculum vitae, his past story was certainly full of incident, even if much of it had little relevance to his future career as dispenser of medical and veterinary remedies in an Irish country town.

Howard Colman Rowe was born in 1869, the eldest child of Howard and Alice Rowe of Abbey Street, Wexford. Howard Rowe senior, the current head of the family milling business, was both a pillar of the Methodist church and a leading figure in local politics. A supporter of Home Rule and of the Irish Parliamentary Party leader, John Redmond, he would serve as mayor of Wexford in 1911/1912. Young Howard grew up alongside his three sisters and two brothers in a lively, self-contained household. The children’s literary, artistic and musical tastes were encouraged, and education, for the girls as well as for the boys, was highly valued. Howard, who suffered from brittle bones, had to be withdrawn from Newtown School in Waterford after just a year, and seems thereafter to have been educated at home, under the eye of his pious and intellectually-inclined mother. In 1886 he came top in the preliminary examinations of the Pharmaceutical Society of Ireland, and worked for a time in Naas, before moving to Cardiff in about 1891.

Having developed his taste for public speaking as a participant in the weekly debates run by the Naas branch of the Young Men’s Christian Association, Howard was soon embroiled in socialist politics in Cardiff, becoming secretary of the local Fabian Society and a prolific contributor to local newspapers on the rights of workers and the condition of the unemployed. While in Cardiff he also involved himself in the Labour Church movement. Founded in Manchester in 1891, this was a Christian Socialist organisation dedicated to the creation of God’s kingdom on earth, holding services based on the Christian model but incorporating socialist songs and readings. The movement quickly established itself in industrialised areas, offering a platform to figures such as Keir Hardie and Ben Tillett, and attracting congregations of three to five hundred people. By early 1893 a branch existed in Cardiff, and Howard is listed as one of the speakers at its second open-air meeting in April of that year.

Following a move to Manchester in 1894, Howard’s political activism intensified. He was a frequent contributor to Keir Hardie’s weekly paper, Labour Leader, to the Labour Church newsletter, Labour Prophet, and to other left-wing publications, and was a familiar figure on socialist, Independent Labour Party and Labour Church platforms throughout the greater Manchester area. His subjects ranged from the ‘municipalisation’ of the Manchester tramways to the desirability or otherwise of religious education in schools, with his Irish background occasionally intruding, as in a short ghost story, ‘The Famine Road’, which drew on the ‘dreadful memories’ of 1849.

However, Howard’s most high-profile reportage was in relation to the Boggart Hole Clough demonstration of 1896. On Sunday 5 July about 40,000 people assembled in the Clough, a park near Manchester, for an open-air socialist meeting. Manchester Corporation had already made clear its determination to prevent such assemblies, and after the meeting some of the speakers, including Keir Hardie and Mrs Pankhurst, the future suffrage leader, were arrested and charged with ‘causing an annoyance’. The affair was widely condemned as an assault on free speech, and the charges were eventually dropped. Howard, who had documented the events leading up to the confrontation in the Labour Leader and was almost certainly present on the day, now took it upon himself to produce the definitive account of the affair in an illustrated pamphlet, The Boggart Hole Contest, which appeared just a few weeks later, in September 1896.

In 1895 Howard married his longtime sweetheart, Cork-born Alice Atkins, daughter of a former Methodist preacher, and in 1897, together with their first daughter, Connie, they returned to Ireland, settling in Arklow. Two more daughters, Ethel and Rhona, were born over the next few years, and Howard built up his business, becoming known in the town as ‘Dr Rowe’. Remembered by his daughters as frail, loving and unworldly, he clearly remained loyal to his early socialist ideals: although there is no indication that he involved himself in local or Irish labour politics, he evidently continued to subscribe to the Labour Leader, contributing occasional observations and letters to the editor, as well as donating over the years to a number of its fundraising appeals.

As far back as his Fabian youth, Howard had declared his appreciation of the role women could play within socialism and his support for the women’s rights campaign. In 1912, perhaps spurred on by his sister, Louie, currently a leading figure in the Newry Suffrage Society, he signalled his approval for the cause by taking out an advertisement in the newly-established Irish suffrage paper, the Irish Citizen. Like his sister, however, he was adamantly opposed to the militant campaign spearheaded in Britain by his former ILP colleague, Mrs Pankhurst. The militants’ use of violence, he believed, had served its purpose as a ‘hugely successful advertising campaign’, but was now undermining rather than benefitting the feminist movement of which he himself, he declared, had been a supporter ‘of twenty years standing.’

Howard’s idealistic strain was evident, also, in his final published work and only novel, Mr Whybrew’s Princess. Published in autumn 1913, this was the story of a humble London chemist’s attempt to claim his rightful inheritance as ruler of an imaginary kingdom. Despite the hero’s ultimate failure, the novel ended on a note of hope, with the establishment of a republic and the prospect of a brighter future. The book was well, if not effusively received, with more than one reviewer looking forward to more works by this first-time novelist.

By the time the book appeared, however, Howard was already very ill. He died in Arklow on 14 January 1914, and was taken home to Wexford for burial in Crosstown Cemetery. At the next meeting of Wexford Borough Council, members extended sympathy to former mayor Howard Rowe on his son’s death, referring to Howard’s ‘great literary abilities’, and to the sad irony of his death so soon after the publication of ‘his latest and most successful work.’ Meanwhile, in a warm tribute, the Wicklow People described him as
A man of deep culture and varied reading, altogether above the average citizen in intelligence and refinement … regarded with great esteem by his colleagues as a man of great worth and high principle.

Howard’s widow, Alice, and his three daughters kept on the business for several more years, through the Great War and into the War of Independence, before leaving Arklow in 1921. Political and economic difficulties no doubt played a part in their decision, as perhaps also did Ethel’s engagement to a British soldier, but the final straw, according to family legend, was Alice’s discovery one night of ‘a Sinn Feiner, hiding on the ground floor, gun at the ready.’ Having chosen their ultimate destination by sticking a pin at random in a map, Alice and her girls settled on the south coast of England. However, the Rowe connection with Arklow was not quite broken: two of Howard’s daughters, Ethel and Rhona, inherited his literary ambitions, and between them produced eleven novels, several with an Irish and a few with an identifiably Arklow background, which offer an insight into the character of their remarkable and independent-minded father and the life of this unconventional family in the Arklow of more than a century ago.