You are here: HomenextPlacesnextDUNLAVINnext9. Entertainment in Dunlavin in the 1890s

9. Entertainment in Dunlavin in the 1890s 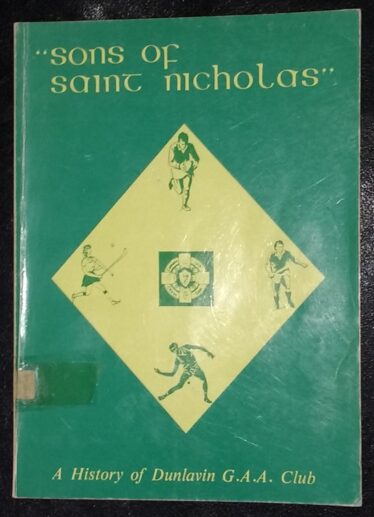 Diversion 9. Today’s diversion recalls a concert from 125 years ago and the early days of the GAA in Dunlavin. Enjoy!

The visit of Percy French to Dunlavin in February 1895, for a charity concert is recorded in the ‘Leinster Leader’.[1] The railway had reached Dunlavin in 1885 (and Tullow in 1886),[2] and the concert was held in the goods store at the station. The idea of the charity concert (to help victims of the heavy snowfalls at the time – the snow is recorded in Canon Frederick Donovan’s diary)[3] seems to have been the brain-child of the local R.I.C. inspector. Here is the article:

On last Saturday evening, February 28th, a variety concert was held at the railway goods store, Dunlavin, for the benefit of the poor of the district, who had suffered much by the long continued inclement weather. Much credit is due to Mr. Supple, District-Inspector, R.I.C., who started the project and carried it to a successful completion. The entrance charges were of a popular character, and all classes, forming a very considerable and sympathetic audience patronised the entertainment. The various items included the song, ‘After the Ball,’ sung by Mr. F. Prendergast; stump speech by Mr C. Fay; song, ‘The Village of Blacksmith’, by Constable E. W. Doyle, R.I.C. Band; Irish Jig dancing by the Messrs P. H. and M. Mullally; a humorous musical sketch, ‘Our Local Penny Readings,’ by Mr. W. P. French; piccolo solo, ‘The Deep Blue Sea,’ by Constable E. Seymour, R.I.C. Band; song, ‘You’ll Remember Me’, by Mrs Thomas Boyle; bellows solo, ‘Killarney’s Lake,’ by Constable Seymour; song, ‘Grandmothers Cottage,’ by Mr Dowden; song, ‘The Yeoman’s Wedding,’ by Constable Doyle; piccolo solo, ‘The Carnival of Venice,’ by Constable Seymour; song in Irish by an itinerant vocalist, and a humorous artistic sketch, ‘A brush with the Natives,’ by Mr W. P. French. Mr. French, who came from Dublin, is widely known, and his drollery and powers of mimicry are simply inimitable. He caused any amount of mirth. The Very Rev. Canon O’Donovan P.P., at the conclusion, returned thanks in a special manner to Mr. Supple and the various parties who contributed to make the occasion so agreeable as a social meeting and so successful as a charity. A special train left for Naas and Sallins at 11 p.m. conveying back numerous visitors to the Dunlavin Charity Concert.’

Apart from concerts, the G.A.A. also provided leisure activities in Dunlavin during the 1890s. A report of a match played on 19 April 1896 between West Wicklow (Dunlavin) and Stratford on Slaney gives us a picture of a large crowd attending the match on a fine day. The match started at 4 o’clock and even though the pitch was ‘a most uneven one, and one would say, hardly suitable for football’ the match was an exciting affair, with Dunlavin emerging as winners. The referee, Mr. Byrne, came from Crosskeys, Dunlavin, and Stratford accused him of favouring the home team. Stratford were considering an appeal to the county committee. The match was ‘decidedly rough, there being numerous scrummages’.[4] Wicklow football was contentious even then, it seems! Finally, I also found an article from December 1896 about the club’s A.G.M. which was ‘held at Mr. C Lawlor’s on Friday night the 11th inst.’ At the meeting ‘Mr. C. Lawlor was unanimously elected captain’.[5] On a personal note, it’s nice to see involvement by my ancestor – there had to be an athlete somewhere in the family I suppose!!!

[3] The priest referred to a ‘long and continued snowstorm’ resulting in much hardship in the district. The reference is published in Chris Lawlor, Canon Frederick Donovan’s Dunlavin 1884-1896: a West Wicklow village in the late nineteenth century (Dublin, 2000), p. 57.