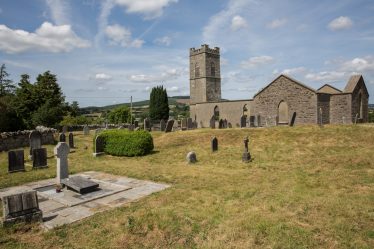 Derrylossary is a ruined Church of Ireland church dating from the early 19th century which was built on the site of an earlier ecclesiastical foundation. There is no trace of any early church remaining on the site, but the oval enclosure over 100 metres in diameter and the three bullaun stones within the site are indication of its ancient origins. Derrylossary was granted to St. Patrick’s Cathedral in Dublin by the Archbishop of Dublin in the 13th century; this is the earliest reference to a church here, but it has been said that the site had links to the nearby monastery at Glendalough. The Church of Ireland building dates from 1820 and was partly financed by the Board of First Fruits. It ceased use as a place of worship in the 1960s and the roof was removed in the 1980s.

Derrylossary is noted as the burial place of two significant figures from 20th century Ireland, both of whom had local connections and who were related to each other. Robert Barton (1881-1975) was born and raised at nearby Glendalough House into a wealthy Anglo-Irish family. He served in the British Army in World War I and was in Dublin in the aftermath of the 1916 Rising, where his experiences led him to leave the army and join the Republican movement. Following his election as a TD for West Wicklow in 1918, he served as Minister for Agriculture in the first Dáil. He was imprisoned during the War of Independence but famously escaped from Mountjoy Jail and left a note for the governor in his cell saying that he felt compelled to leave due to the discomfort of the surroundings. Barton was part of the delegation which travelled to London in late 1921 to negotiate the Anglo-Irish Treaty which secured Irish Independence. Barton himself, however, later opposed the Treaty and stood as an Anti-Treaty candidate in the election of June 1922. Although he withdrew from politics after the Civil War, he later served in a number of public offices, including as Chairman of Bord na Móna.

Erskine Childers (1905-1974) served as President of Ireland for just over one year and died in office. His father, also Erskine Childers, was a first cousin of Robert Barton and also a member of the Anglo Irish Treaty delegation in 1921. The elder Childers was executed during the Civil War when he was arrested in possession of a gun that had been given to him by Michael Collins. Prior to facing the firing squad, he told his then 16-year old son to seek out and shake the hand of all those who had signed his death sentence. Educated in Britain, the younger Childers returned to Ireland in the 1930s and was elected a Fianna Fail TD in 1938. He held several cabinet posts throughout the 1950s and 1960s and was Tánaiste from 1969 to 1973 before resigning to contest the Presidential Election.