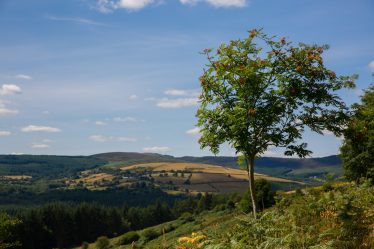 Tooperstown Hill overlooks Annamoe, Laragh and the Avonmore River and is traversed by the Avonmore Way walking trail. The origin of its name has been the subject of discussion. Some local accounts say that is was used as a base by troopers or soldiers during the Cromwellian Conquest of the 1650s or perhaps later during the 1798 Rebellion of the United Irishmen. However, the Irish language version of Trooperstown is Tigh an Tearmainn, meaning ‘the house of the church lands’. It is more likely, therefore, that Trooperstown was part of the sanctuary lands of the nearby monastery of Glendalough and that it is one of the many places which reflects mistranslation from Irish into English. Another Irish name for Trooperstown Hill is Maoilín, meaning ‘little round hill’.

An old road from Clara Vale northwards along the eastern side of the hill was once the principal route towards Dublin and was called the Rocky Road. A regular stopping point along this road was marked by a large stone which may be a glacial erratic. This became known as the Bread & Butter stone because travellers would stop here for refreshments.

A holy well once existed in the Trooperstown area known as Fraughan’s Well, which may derive from the Irish Tobar Fraochán, or ‘the well of the bilberries’. it is likely that bilberries would have been abundant in this upland area before modern afforestation. According to the Schools Folklore Collection, this was situated in a roadside field known as Páirc an Teampaill, meaning the field of the church. During Penal Times, mass was said in a cave underneath a tree in this field. The Sites and Monuments Record states that a bullaun stone is located in a field known locally as Church Field on the eastern side of the hill. Close by to the south-east is the former Trooperstown National School, which opened its doors in 1835 and accommodated more than 100 students during its lifetime. The former schoolhouse is now a private residence.