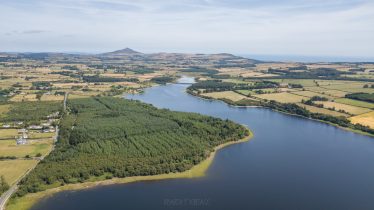 Vartry Reservoir was constructed in the mid-19th century to provide a new fresh water supply for Dublin City. Dublin was growing rapidly at the time and the traditional source of water from its canals and rivers was proving inadequate for demand. In addition, the link between clean water and public health was becoming apparent at that time. Cholera had arrived in Europe in the preceding decades and the lack of fresh clean water contributed to its spread.

The Vartry Reservoir was an ambitious project at the time and a huge engineering challenge. The site was chosen on the recommendation of a Royal Commission who advised that although it was an expensive option, it was the best choice to provide Dublin with water. The dam was constructed by manual labour between 1862 and 1864 and must have involved huge numbers of workers. It has a clay core to prevent leakages and the upstream side is faced with stone to minimise erosion.

One of the most unique features of the project is the Draw Off Tower situated just above the dam. This building provided access to pipes which are used to convey water from the reservoir under the dam and into the water treatment plant. The crenellated parapet gives the building the appearance of a small castle.

The key driver of the project was Sir John Gray who was a medical doctor, a member of Dublin Corporation and the owner of the largest newspaper in the country, the Freeman’s Journal. When plans for the reservoir were being drawn up, he took the unusual step of purchasing all of the land around Vartry to prevent it falling into the hands of speculators. He then resold it to Dublin Corporation at the same price that he had paid for it. Today he is commemorated with a bust at Vartry and a statue on O’ Connell Street in Dublin.

As Dublin continued to grow, it was decided to create a second reservoir in the early 20th century. This was completed in 1923. Advances in technology meant that machines were used to carry out much of the work, but large numbers of workers were still required and they were housed in temporary accommodation which became known locally as Tin Town.

Construction of the reservoirs led to the creation of important natural habitats and Vartry is now home to a number of species of wildfowl, some of whom migrate here in the winter months. Ducks such as teal and mallard are common, while grebes, herons, cormorants and swans can also be seen. There are walking trails around both of the lakes.