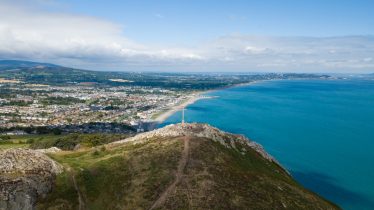 Bray Head is a distinctive landmark overlooking the town of Bray and the Irish Sea. Along with the nearby Little Sugar Loaf and Great Sugar Loaf, it forms a trio of prominent ridges in north Wicklow. Geologically, Bray Head is composed of hards quartzite and slate rocks which makes it more resistant to weathering and erosion. The rocks date from what is known as the Cambrian period around 500 million years ago and were formed underneath the sea bed.

Significant fossils called Oldhamia have been found on Bray Head; these are a type of trace fossils and their radial pattern is evidence of small creatures feeding on the sea bed. They date from a time of the earliest invertebrate creatures. The fossils were first discovered by Thomas Oldham of the Geological Survey of Ireland in the mid-1800s, probably when the rail line along the cliffs was under construction.

Bray Head is also a Special Area of Conservation and is an important habitat for a range of wild birds and plants. The two habitats of significance found on site are Vegetated Sea Cliffs and Dry Heath. A variety of heather and grass species are present, along with five different types of orchid. Amongst the important seabirds which are found on Bray Head are Fulmars, Razorbills, Kittiwakes and Black Guillemots, with the populations of the latter two of national importance.

Today, Bray Head is enjoyed by many as a recreational amenity and there are several walking paths around the head. There are a number of points of interest. The concrete cross on the summit was erected in 1950 to mark Holy Year. A ruined medieval church known as Raithin an Chluig, or the little rath of the bell, lies on the northern slopes of the head. To the east of this on the coast there was once a cave known as Brandy Hole which was used by smugglers to bring in goods from France. It was destroyed when the rail line was constructed along the cliff face.