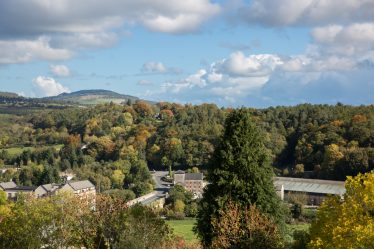 Rathdrum is a gateway to the Wicklow Mountains from the south and sits on a high ridge overlooking the Avonmore River. The name Rathdrum comes from the Irish Ráth Droma, meaning the fort on the ridge. Today there is no trace of this prehistoric structure, but Rathdrum was a stronghold of the O’ Byrne clan in medieval times before it was wrested from them by Lord Deputy Fitzwilliam in the late 1500s.

Rathdrum’s location was key to its growth and prosperity in the late 18th century, when it was chosen by Earl Fitzwilliam as the site for the Flannel Hall. Wicklow Sheep were much valued for their wool and Rathdrum became a thriving centre for the trade in flannel and wool products generally. It is said that produce from over 1,000 looms and spinning wheels in cottages across south Wicklow were traded here and that purchasers came from abroad to procure high quality produce. The woollen trade was hit hard by the Act of Union in 1800 and declined in the following decades. The Flannel Hall was damaged by fire in 1890 and today the only surviving part of the building is used as a community centre.

Other industries in Rathdrum during the 19th century included two breweries, a tannery and a corn mill. The corn mill is adjacent to the 18th century bridge over the Avonmore river and is the best surviving piece of Rathdrum’s industrial heritage. The worker’s cottages across the bridge from the mill are known as Lowtown due to their situation downhill from the town centre. Monthly fairs were held on Fair Green throughout the 19th century where agricultural produce was traded, while the Market Square has also been a focus of commercial activity.

The railway arrived in Rathdrum in the 1860s and this necessitated the construction of a viaduct to bridge the Avonmore. This is an impressive feat of engineering and one of the most notable structures in the town. Around the same time, the neo-Gothic Catholic Church of St. Mary & St. Michael was built to a design by J.J. McCarthy, the most prominent architect of his time. Several features of the church take their inspiration from the monastic settlement at Glendalough.

Rathdrum was the birthplace of Anne Devlin (1780-1851), who was the housekeeper of Robert Emmet, the leader of the 1803 rebellion. She has gone down in Irish history as a heroine because she refused to cooperate with authorities and betray Emmet and his comrades in spite of being imprisoned and tortured. Charles Stewart Parnell (1845-1891) was born at nearby Avondale and made his first political speech in the Market Square. This same location was later used to shoot a scene for the film Michael Collins in 1995.