You are here: HomenextPlacesnextANCIENT WICKLOWnextThe Beginnings of Metal-Working - The Bronze Age

The Beginnings of Metal-Working - The Bronze Age 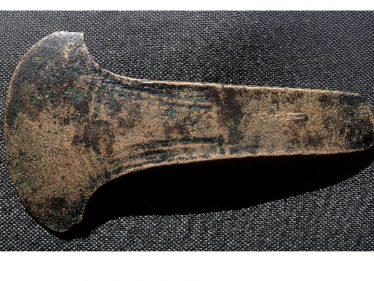 For thousands of years stone was the main material used to make objects such as axes, knives and arrowheads.  Then came a new invention – the use of metal.  The revolutionary idea of producing objects from metal, initially copper, arrived into Ireland nearly 4500 years ago.  Copper can be found naturally in rock.  In order to separate the copper from the rock it was smelted at very high temperatures.  The copper was made into cakes, almost like pancakes, and examples of these have been found at Monastery near Enniskerry.  These cakes of copper could be more easily transported around the country, and could be melted down by a metal worker and poured into a mould to make an object such as an axe or dagger.  Examples of these earliest metal axes have been found in many places around Wicklow.  Overtime these early metal workers learned that if they mixed tin with copper it formed bronze, which was stronger than copper.  For this reason, this period of archaeology is known as the Bronze Age.  Apart from bronze, these early metal workers also used gold to make wonderful ornaments.

This article is extracted from County Wicklow in Prehistory a heritage office publication produced as an action of the County Heritage Plan. Text supplied by Chris Corlet