During the Bronze Age, the megalithic tombs of earlier years were replaced by new forms of large stone tombs.  These tombs are called by archaeologists wedge tombs, simply because the are wedge shaped.  Unlike the older passage tombs at Seefin and elsewhere, wedge tombs were not built on mountain tops, and are usually found on hillsides.  A fine example of such a tomb can be found at Carrig, near Lackan, overlooking what is now the Poulaphuca Reservoir, but was formerly a floodplain where the King’s River joined the River Liffey.  It was in these tombs that the first people to ever use metal in Ireland were buried. Over time it no longer became fashionable to build large stone tombs, and new forms of burial monuments were built as places to bury the dead.  The remains of the person who died were usually cremated, and placed within specially made pot or urn.  This was then placed into a small grave.

Sometimes a large mound of earth or a “cairn” of stones was placed over the grave.  Sometimes a circular ditch and bank were placed around the grave.  An example of this can be found on the summit of the hill at Ballygahan Upper, between Avoca and Aughrim. 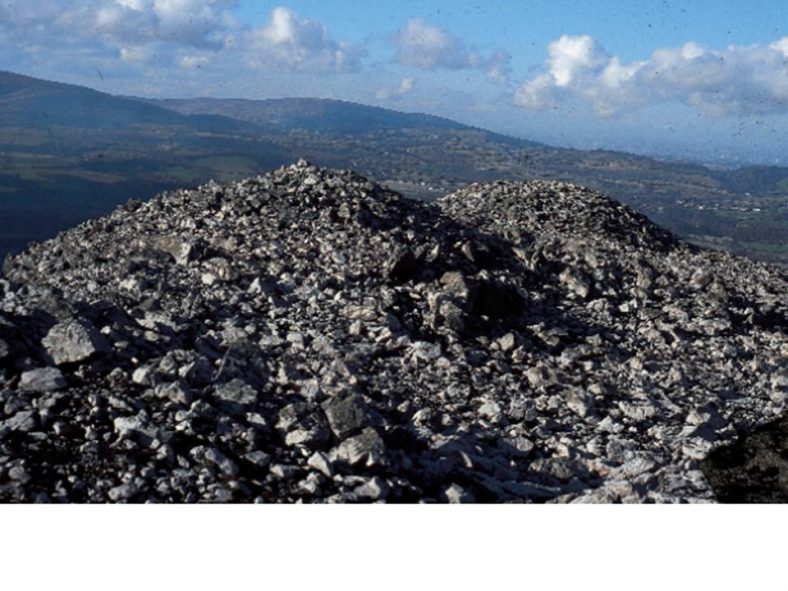 Cairns on the shoulder of the Great Sugar Loaf

This article is extracted from County Wicklow in Prehistory a heritage office publication produced as an action of the County Heritage Plan. Text supplied by Chris Corlet