The first bridge over the River Liffey is set high in the Wicklow Mountains, just 600 metres from its source. It is known as the Liffey Head Bridge and its parapets are constructed of local Wicklow granite. The bridge dates from the early 19th century, when the Military Road was built by the British Army.

The surrounding area is a stark and windswept expanse of blanket bog, ringed by the mountain peak of Kippure and Tonduff. Liffey Head Bog is an area of outstanding scenic beauty but is also a very significant ecological site, being one of the most important areas of blanket bog in the eastern half of Ireland.

Blanket bog began to form in Ireland over 4,000 years ago, when milder conditions and heavier rainfall led to leaching of soils and the formation of an impermeable layer known as iron pan. Soils became waterlogged as a result and only certain plants could grow in this acidic environment. Heathers, bog mosses and cottongrasses came to dominate. The lack of oxygen meant that these plants did not fully decompose but instead formed peat. 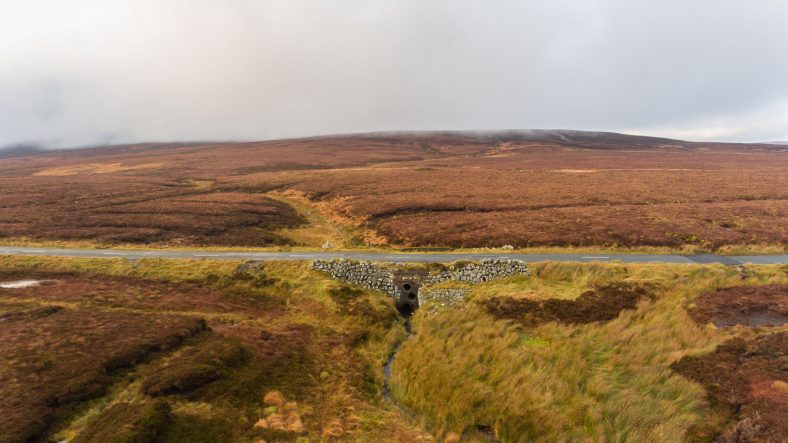 Although the peat only grows by 1mm a year, over thousands of years the bog has developed to a thickness of up to 10 metres, forming a carpet of peat over the mountains. Liffey Head Bog is an actively growing blanket bog where peat formation still takes place. A unique ecosystem has developed here supporting a range of plants that are not found in other environments. Sphagnum mosses are particularly important in the formation of bogs. Ireland contains 8% of the world’s blanket bog, yet almost 80% of the original blanket bog has been removed, making the conservation of remaining bogs an important priority.

The Red grouse, a bird which is an endangered species, nests in the bogs. In fact one of the oldest structures in this area was the Grouse House, built by Lord Powerscourt in the 18th century. This small hut was about 500 metres south of the source of the Liffey and was used as a base when men came hunting grouse. It was marked on a map of the area in 1756. Although now almost completely collapsed, it is an important landmark in this bleak area.

Conservation of the Bog

During the 20th century, many Dubliners used the Military Road to access the Liffey Head bog for turf cutting, particularly during World War II when fuel was in short supply. They would cycle uphill from the city to spend long days working by hand to cut and dry turf before bringing it home to their fires. Machine cutting of turf began in the 1980s and this had the potential to cause greater environmental damage. However, conservations recognised the importance of the bog and it was acquired by the state and incorporated into the Wicklow Mountains National Park. Work was undertaken to block up drains that had been created on the bog to restore the natural drainage system. This will help to ensure that the Liffey Head Bog is preserved for future generations. Liffey Head Bog is now a designated Special Area of Conservation.