You are here: HomenextPlacesnextRIVER LIFFEY HERITAGE PROJECTnextThe Geology of the River Liffey

The Geology of the River Liffey 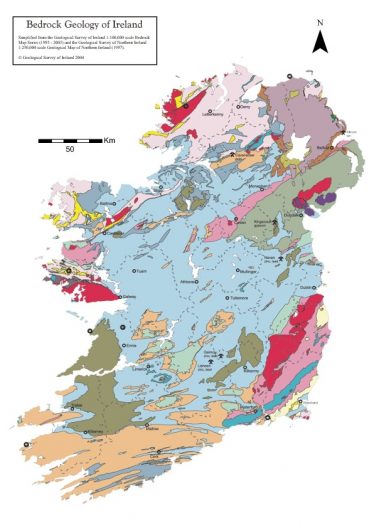 The Liffey rises in the Wicklow Mountains and the underlying geology of this upland area has an impact on the river. The underlying granite bedrock was formed during the Devonian Period between 415 and 360 million years ago. Granite is an igneous rock formed by volcanic action. The word granite comes from the Latin for grain, and a close examination of the rock reveals small grains that are grey and white in colour.

Much later, during the last Ice Age, the granite of the Wicklow Mountains was scoured by glaciers that moved across the land. It was only after the end of the Ice Age, about 12,000 years ago, that decaying vegetation began to form the thick blanket of peat that now covers the mountains. Where the bed of the Liffey is visible as it flows through the Wicklow Mountains, the underlying geology is apparent. Small pieces of granite that have been eroded and ground into fine pieces by the action of the water can be seen glinting in the sunlight on a fine day, while the water itself is coloured brown by the peat deposits. Owing to the geological and soil conditions, the waters of the river are acidic and less conducive to fish.

Kippure is the highest of the mountain peaks that encircle the Liffey Head Bog. Close to the summit of this 757 metre mountain there is evidence of naturally-occurring peat erosion, where large granite boulders and rock outcrops are exposed.

Flow of the Liffey

The Liffey tumbles westward down the slopes of the Wicklow Mountains. On the road between the Sally Gap and Kilbride, it flows by the Athdown Moraine. This is a large accumulation of sand and gravel deposits created at the end of the last Ice Age. The Wicklow Mountains would have been covered in glaciers at this time and the moraine marks what was once the edge of the ice margin. Most of the deposits have been removed by quarrying, but it is interesting to note that there was once a Norman motte here controlling a nearby ford over the Liffey. Just beyond this area, between Kilbride and Blessington the underlying geology changes from granite to sandstone and shale.

Blessington Lake is a well-known feature, but it is an artificial creation by the construction of the Poulaphuca Dam in the 1940s. What is not as widely known is that there was once a natural lake here, formed by glacial meltwaters towards the end of the last Ice Age. Evidence of this is apparent to the south-west of the modern lake in the townland of Britonstown. Here there are two steep and narrow gorges. One carries the River Liffey and is crossed by Poulaphuca Bridge. The other gorge to the south is known as The Glen and is crossed by the so-called Dry Bridge. There is no river at the base of this gorge. It was in fact formed by torrents of glacial meltwater flowing through here as temperatures increased and ice melted. It is up to 30 metres deep and almost 1km in length.

Beyond Poulaphuca, the Liffey winds its way across southern Kildare. Around Kilcullen, the underlying geology changes once again. Limestone, a sedimentary rock formed millions of years ago beneath the sea, covers most of the central lowlands of Ireland. For the rest of its course, the Liffey flows over limestone. This has an important impact on the river as limestone is more alkaline, creating more conducive conditions for fish such as trout to thrive.