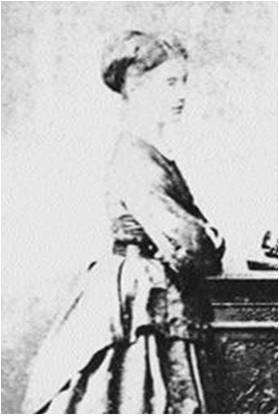 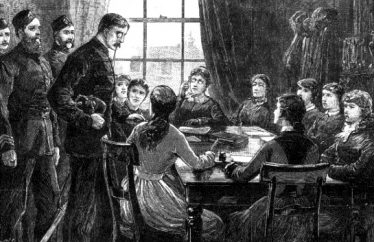 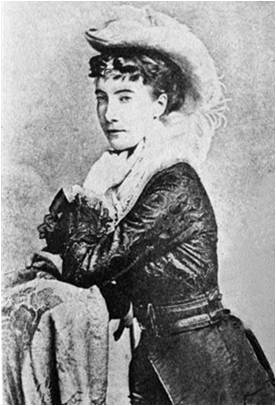 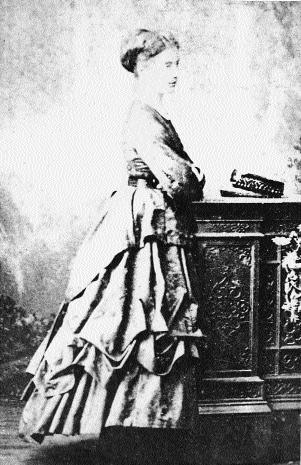 Anna Parnell was born at Avondale near Rathdrum on 13 May 1852, the tenth of eleven children of John Henry and Delia Parnell. Her father died suddenly when she was seven years old, and the Parnells found themselves in much reduced financial circumstances. The heavily indebted Avondale estate, inherited by Anna’s thirteen-year old brother Charles Stewart Parnell, was let, while the family moved to a series of rented homes.

Like most girls of their class at the time, Anna and her elder sister Fanny were educated at home by a succession of governesses. They were, however, fortunate in that their American mother permitted a degree of independence rare at the time, and both girls were encouraged to read widely and to pursue their studies in literature, history and politics. In particular, Anna and Fanny shared with Charles a keen interest in Irish nationalism, and at the age of sixteen Fanny published her first poems in the Fenian newspaper, the Irish People. She became a prolific author of verse, much of it on patriotic themes, and her most famous poem, ‘Hold the harvest’, published in 1880, was   described as the ‘Marseillaise of the Irish peasant.’ However, her health was poor and, though politically committed, much of her short life was spent out of Ireland.

As a young woman, Anna was said to have been ‘of a nervous, resolute disposition – wayward, a little snappish, and absolute mistress of the house.’  To a friend, she appeared ‘in her neat dress, the very embodiment … of a delicate, austere lady, just verging on spinsterhood’, but she could also be uncompromising, and capable of intolerance and intellectual arrogance. Charles thought highly of her abilities: she was, he remarked, ‘never at a loss … never mistaken in her judgement’ and ‘might have been great in anything’, while in the view of historian Roy Foster, Anna was ‘in many ways … the most formidable character of the family’, as well as ‘one of the most likeable, and possibly the most admirable, of the Parnells.’

After spending some time in Paris, Anna chose to study art, at first in Dublin and later in London. In 1875, however, her brother was elected MP for Meath, later becoming leader of the Irish Party at Westminster, and Anna became increasingly involved in Irish political events as played out in parliament. She was a frequent visitor to the House, following debates from the Ladies’ Gallery and reporting on them in her ‘notes from the ladies’ cage’ in the Celtic Monthly.

With the outbreak of the Land War, Anna moved from being an observer of political events to a participant. The Irish National Land League was founded in 1879, with Parnell as president, and the aim of securing ‘the land of Ireland for the people of Ireland’ by a programme of peaceful and constitutional action. In the short term, however, a series of poor harvests and falling agricultural prices left many tenants facing eviction for non-payment of rent, and in 1880 Parnell arrived in New York to seek Irish-American funds to support the campaign and to relieve hardship. Anna and Fanny were already in the US, and immediately threw themselves into the effort, working closely with Michael Davitt, the Land League’s secretary and principal organiser. In an effort to maximise American support, Fanny decided to establish a women’s league, and in October 1880 the New York Ladies’ Land League was founded, with Delia Parnell as president, and Anna and Fanny spearheading a successful campaign which raised thousands of dollars for transmission to Ireland.

In late 1880 Anna returned to Dublin, where the expectation was that the government would shortly take the decision to imprison the leaders of the Land League. Inspired by the example of the American women’s organisation, Davitt proposed to establish a similar body in Ireland, which would keep the agitation alive and distribute grants to evicted tenants and their families. With some reluctance, Parnell and the other leaders agreed, and on 31 January 1881 the Ladies’ Irish National Land League was founded, with Anna Parnell as its effective leader. When arrests began shortly afterwards, the Ladies’ Land League set about its appointed task of processing applications, supplying money for relief purposes and distributing literature. Finding the Land League records to be deplorably kept, the women compiled their own ‘Book of Kells’, with detailed information on every Irish estate, described by Davitt as ‘the most perfect system that can be imagined.’ In spite of the male executive’s ambivalence and criticism from some Catholic church leaders and many newspapers, numbers grew rapidly, with more than five hundred branches of the Ladies’ Land League throughout Ireland by the beginning of 1882. Members included the poet Katherine Tynan and eighteen-year old Jennie O’Toole from Baltinglass, who as Jennie Wyse Power would play a leading part in the nationalist movement and in the early years of the Irish Free State.

In October 1881 Parnell himself was arrested together with most of the leaders of the Land League, and in retaliation issued the No Rent manifesto. The Ladies, who had not been consulted about this move, were faced with the prospect of trying to enforce a policy which had little chance of success, but they soldiered on, assisting evicted tenants and their families, organising the provision of huts in which they could be housed, and providing for growing numbers of male prisoners and their dependents.   In December the Ladies’ Land League was also suppressed and a number of their members were arrested and imprisoned, but the ban failed to end their activities: indeed, as the nationalist United Ireland pointed out, while the men of the Land League had ‘melted away and vanished the moment Mr Forster’s policemen shook their batons’, the women ‘met persecution by extending their organisation and doubling their activity and triumphing.’

As the campaign dragged on, relations between the Ladies and the Land League worsened. With evictions giving rise to widespread agrarian violence, Parnell’s need to reach a resolution with Gladstone became more pressing, and in April 1882 he and the other leaders were released from gaol as part of an agreement to end the agitation. Shortly afterwards the Ladies’ Land League, disillusioned by the outcome of the campaign, expressed its wish to disband, and after prolonged wrangling succeeded in doing so. The gulf between the Land League and the Ladies was epitomised by the estrangement between Anna and her brother which lasted until his death ten years later. According to his wife, Parnell regretted the breach, and tried unsuccessfully on a number of occasions to repair it, but Anna ignored his letters and refused to acknowledge him when they met accidentally. After his death, however, she did write to the Irish Times to object to the choice of Glasnevin as his burial place: his body ‘belonged to the Irish people’, she said, only if their having killed him gave them a title to it.

The Tale of a Great Sham

Her sister Fanny’s death in July 1882, combined with the stress of the campaign and its aftermath, left Anna in a state of physical and nervous collapse, from which she did not recover for several months. For the rest of her life, she lived mainly in England, sometimes under a false name and at times in considerable poverty. Although she remained in contact with former Ladies, such as Jennie Wyse Power, she played little part in nationalist politics, and the response when she did campaign for the Sinn Fein candidate in North Leitrim in 1908 persuaded her that ‘the character of Irishmen is at present incompatible with any great change for the better in Ireland.’ However, Michael Davitt’s charge, in The fall of feudalism in Ireland, that the Ladies had encouraged agrarian violence, galvanised her to produce her own account of the Land League years, The tale of a great sham. In it she argued that the Land League in fact failed in its objective by neglecting to pursue the No Rent Manifesto to its logical conclusion. She also complained about the hostility of the Land League leaders towards the Ladies throughout the campaign: regarding the women as subservient assistants rather than equal partners, they had relied on them to carry on Land League policies in their absence while seeking to reassert control over them as soon as this should become practicable. Failing   to find a publisher for her work, she entrusted the manuscript to Helena Molony, editor of the nationalist woman’s paper Bean na h-Eireann. Molony, too, was unable to get the work published, and in the upheavals which followed, the parcel disappeared from view.

In 1910 Anna moved to Ilfracombe in Devon. On 20 September 1911 she accidentally drowned while swimming, and was buried in the churchyard there a few days later. Her passing received little attention: as Katherine Tynan wrote a few years later, ‘her life ought to have been written, for she was a great woman, and yet I think that she herself would have preferred that her name be writ in water.’ And so, for many years, it was. The centenary of the Land League in 1979 passed with scarcely a mention of Anna Parnell, and it was not until the publication – finally – in 1986 of the rediscovered Tale of a great sham that a reassessment was possible of a woman regarded by some contemporaries as the equal in ability and judgement of her celebrated brother, and without question a central figure at a pivotal moment in Irish history.

Roy Foster, Charles Stewart Parnell: the man and his family (1976)