You are here: HomenextPeoplenextOur Wicklow Women ProjectnextThe Suffragettes And The Chief Secretary

The Suffragettes And The Chief Secretary 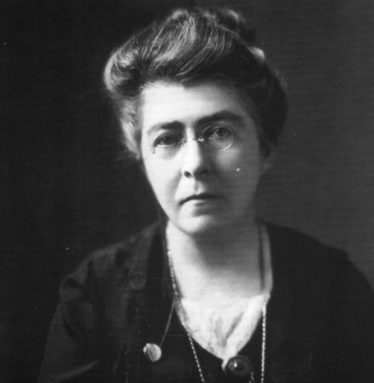 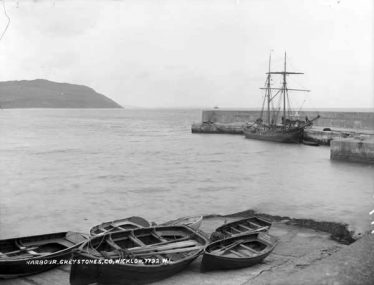 On 25 October 1910 the Chief Secretary for Ireland, Augustine Birrell, paid an official visit to Greystones. As the second most senior political figure in Ireland, Birrell was concerned with the great issues of the day, such as land reform, home rule and the university question. What brought him to Greystones, however, was a more strictly local matter – the dilapidated condition of the pier and the urgent need for a State grant for its repair.

On arrival in the town Birrell and his entourage were welcomed by a reception committee of local politicians and worthies, and conducted to the harbour to view what was described as  ‘the tumbledown heap of masonry, which is practically all that remains of a pier constructed less than a quarter of a century ago.’  Hardly had the Chief Secretary begun his tour, however, than he was accosted and detached from the rest of his group by two ladies with a message of their own to impart.

Although the spectators did not immediately recognise them, the two women were subsequently identified as Hanna Sheehy Skeffington and Hilda Webb, two of the leading figures in the Irish women’s suffrage movement. The campaign for votes for women, which had begun a half century earlier, had recently intensified, with the establishment in 1908 by Hanna Sheehy Skeffington and others of the Irish Women’s Franchise League. With a membership made up largely of young, well-educated, nationalist-minded women, the IWFL was impatient with the slow progress of the campaign so far and, unlike the various other suffrage groups currently active in Ireland, willing to use ‘non-constitutional’ methods in its demand for the vote. Such tactics were already being employed in Britain by the Pankhursts and their colleagues in the WSPU. Now, with another Home Rule bill in prospect and suspicious of the Irish Party’s commitment to female suffrage, the Chief Secretary’s visit to Greystones provided an opportunity for the IWFL to initiate its own militant campaign in a way which would guarantee maximum publicity for the cause.

‘We pay rates for piers, and we are entitled to be heard.’

With Mrs Sheehy Skeffington on one hand and Miss Webb on the other, the Chief Secretary’s procession proceeded on its way, the spectators at first assuming that the newcomers simply wished to exchange civilities with the distinguished visitor. Before long, however, the conversation became heated, and onlookers began to suspect that the subject under discussion was rather more controversial than that of the pier’s reconstruction. When the Chief Secretary tried to escape with the excuse that he had several other deputations to receive, one of the women was heard to retort that ‘you would not hear our views, and so you have left us no alternative but to approach you in this way, and we shall do so every time you appear in public.’ While some of the crowd were amused by the Chief Secretary’s discomfiture, others were appalled by what they regarded as a breach of protocol. Sir James Dougherty, the Under-Secretary, tried to intervene, protesting that the question of the pier had nothing to do with votes for women. ’Indeed, it has,’ the more voluble of the two ladies corrected him. ‘We pay rates for piers, and we are entitled to be heard.’ ‘You are a disgrace to your sex’, spluttered one outraged onlooker. ‘You are a disgrace to humanity’, the lady retorted.

Somebody called for the police

Somebody called for the police, and a young constable who had been watching from across the street sheepishly approached, but hesitated to act. With matters now descending into farce, the MP William Redmond, brother of the anti-suffrage Irish Party leader John Redmond, stepped forward to salvage what he could of the situation. Speaking ‘most courteously’ to the ladies, and as ‘a warm advocate of their cause’, he passed on the Chief Secretary’s promise that he would receive a women’s suffrage deputation within a few days. The ladies, having routed their opponents and with their immediate aim accomplished, thanked him graciously and walked away, ‘amidst a good deal of laughter.’ The inspection resumed under calmer conditions, and the constable, rebuked for his failure to act at this moment of crisis, protested that he could hardly have been expected to anticipate such a scene. ‘How could I tell’, he demanded plaintively, ‘that them ones would turn up at Greystones?’

‘The first step towards militant action’ by the Irish suffrage movement

This episode, reported by the Irish Times at the time as no more than an ‘amusing scene’, has been described by a contemporary historian as ‘the first step towards militant action’ by the Irish suffrage movement. In the months to come, a number of IWFL members were imprisoned both in Ireland and England for militant activities, and some (including Hanna Sheehy Skeffington) went on hunger strike. The campaign achieved partial victory in the 1918 general election when women over thirty voted for the first time, and in 1922 the independent Irish state extended the franchise to women on the same terms as men, bringing to an end a struggle whose final stage had begun with that almost-forgotten encounter on Greystones pier on an autumn day in 1910.