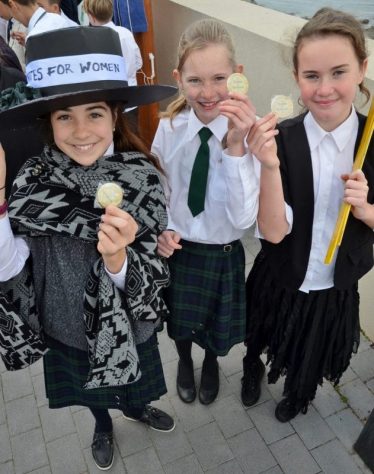 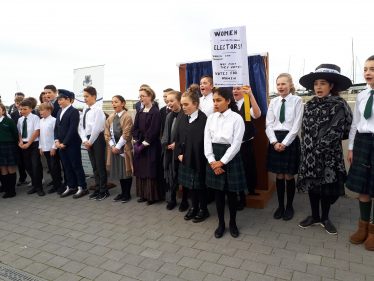 A special commemoration event was held 108 years to the day of a suffragette protest which took place at Greystones Pier. (Read more about the original incident on this site here). Organised  by the of the Greystones Archaeological & Historical Society in association with Greystones Municipal District and the Heritage Office,  the event saw Cllr Nicola Lawless unveil a special commemoration plaque and the pupils from St. Brigid’s N.S perform their own ‘amusing scene’ , re-enacting events of the day much to the entertainment of their assembled audience.

“I’m very sorry not to be here today, as it’s an honour that Greystones Municipal District Council is commemorating the direct actions of two stalwart suffragettes, my grandmother Hanna Sheehy Skeffington and Hilda Webb. Their quiet but insistent approach foxed the authorities, as later summed up in the Irish Times report, which described this pivotal episode in the suffrage campaign as no more than an ‘amusing scene’. I love the quote of the police constable’s complaint “How could I tell that them ones would turn up at Greystones?’”. I’m thrilled that there will now be a plaque to commemorate this key event.

It was to be less than two years before both Hanna and Hilda were to participate in the Irish Women’s Franchise League’s even more disruptive activity in the breaking of windows in Dublin Castle and the Custom House respectively. Commenting on the subsequent jail sentences, Hanna remarks rather ruefully that she did ‘only enough, as it proved, for a three-month stretch – The Custom House-G.P.O. band got six’. Many thanks to Wicklow County Council, to Greystones Municipal District Council and especially to Greystones Historical Society and to Rosemary Raughter for drawing attention to this first key suffrage incident and for ensuring that it will be recorded for the future.”

It’s appropriate that this plaque should be erected in this centenary year of the Representation of the People Act. However, it’s important to remember that the women’s rights movement was already more than half a century old when the events we’re commemorating today took place. From the 1860s on small societies led by a few committed and courageous individuals were campaigning on a range of issues, and achieved a great deal in terms of women’s access to education, employment and local government.

By the turn of the 20th century, however, the parliamentary vote still seemed as far away as ever. The next chapter in the campaign would be written by a new generation of suffragists – largely younger women who had benefited by the advances in female education, many with nationalist or labour sympathies. In 1908 two of them, Hanna Sheehy Skeffington and Margaret Cousins, founded a new suffrage organization, the Irish Women’s Franchise League. Initially the IWFL operated much as its predecessors had done – lobbying MPs, holding public meetings and so on – while recognizing that other methods might in time be called for. And on an October day in 1910 two of its members, Hanna herself and Hilda Webb, initiated the final stage in that decades-long suffrage campaign, when they took what is now acknowledged as the first step towards militant action by accosting the Chief Secretary for Ireland here on Greystones Pier.

The next few years would be some of the most eventful in our history, with the apparent achievement of Home Rule, the outbreak of World War I, and the Easter Rising, followed by the War of Independence. But in early 1918 the Representation of the People Act, passed at Westminster, granted the parliamentary vote to all men over 21 and to women over 30. In December 1918 women from the various Irish suffrage societies, constitutional and militant, nationalist and unionist, accompanied the ninety-year old, veteran suffrage leader, Anna Haslam, as she went to cast her first vote in a parliamentary election at Dublin’s William Street Courthouse. That election, as we know, produced the first woman MP in Constance Markievicz, and a few years later, in 1922, the Irish Free State guaranteed women the vote on exactly the same terms as men.

As Cathaoirleach I want to Welcome everyone here today for this unveiling of the commemoration plaque to mark a historic event here In Greystones which happened on; this day 25th October 1910.

This event is of great importance to and other women past, present; and future. The two women Hilda and Hanna made a stand that day for every women in the country to give them the right to vote. It was one of the first protest nationally as part of the suffragette movement here in Ireland. And without these brave women, I may not be standing here to day address you as Cathaorleach or even have had a chance to be in politics. To think if women had never got the vote come Friday only the men in the country would be voting for our presidents.

So just two, two women, two local women here in Greystones had such an important part to play in our history and it is only right that we should celebrate and remember what they did for us.

I would like to thank and acknowledge the organisers of todays event, Rosemary Raughter from the Greystones archaeological and Historical Society who came up with the idea, Deirdre Burns our heritage offer from WCC, Greystones MD and all involved who helped with this event.

Also, a big thank you and a very well done to St Bridget’s National school for their performance and participation this morning.