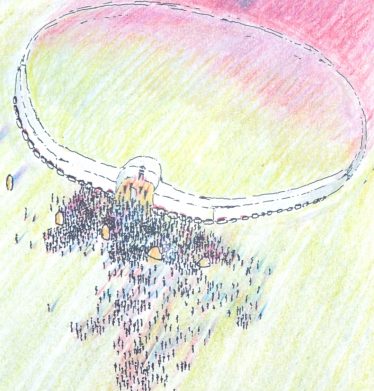 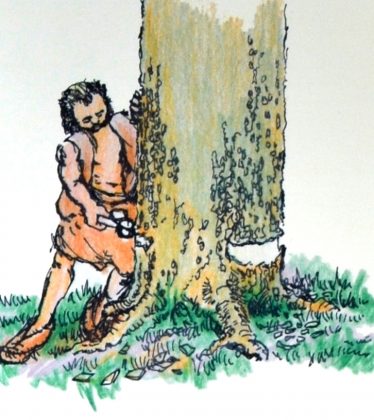 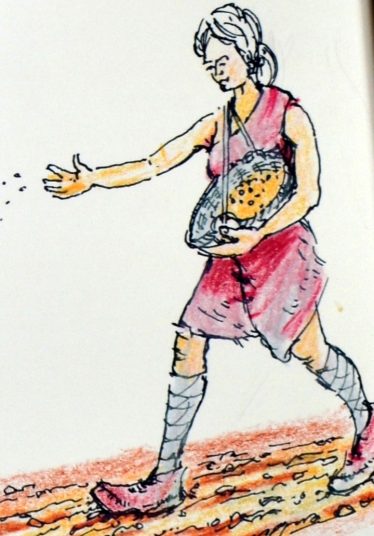 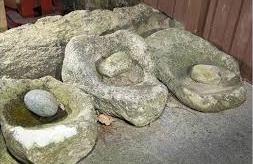 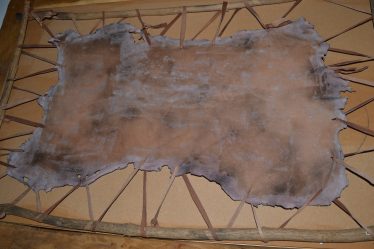 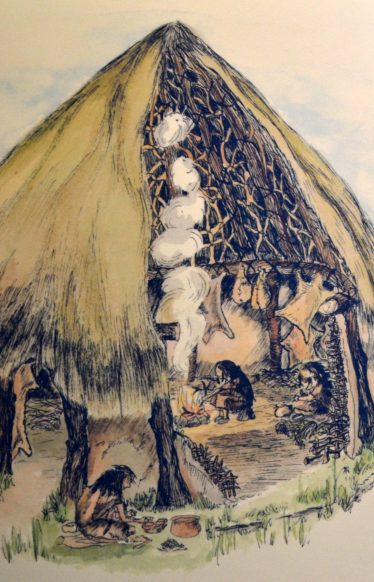 The first humans to leave their mark on the land around Baltinglass were the Neolithic or Stone Age people. Archaeologists think they may have arrived as far back as six thousand years ago. They came from over the sea in small boats. The wooden frames of the boats were covered with hides. In their boats they brought the tools, pots, animals and grain they needed to set to work on their distinctive farms.

These Neolithic people were the same as those who left an indelible mark on the landscape of Ireland at such dramatic sites as the passage tomb at Newgrange, Co. Meath. In many places they built big and complicated structures called cairns. Cairns were constructed out of huge quantities of stone and were used for burial and perhaps social and ritual functions. Building a cairn required a great deal of planning and effort. A single cairn would have taken years, or even generations, to complete. The great amount of energy put into these buildings shows that the people belonged to a stable sophisticated society. They must have been producing enough extra food from the land to support the labour they needed to complete such a large task. Baltinglass has just such a cairn, which is still visible to this day. This cairn was at the hub of a thriving society.

The Neolithic people had to clear the land in order to graze their cattle and plant their cereals. It would be very difficult to chop all the way through a big tree with a little stone axe. But they discovered that if they “circled” the bark of a tree all the way around, then the tree would die very quickly. The stone axe- heads could shatter with a big swing and so the farmers learned by experience to make short, sharp blows. The remains could then be burned away later. The stumps were not pulled up and the early farmers simply worked around them.

The “Ard” or Scratch Plough

Once the land was cleared, the ground needed to be broken up and ploughed in order to sow the seed. A wooden stick with a flint tip, or a bone or stone hoe, was used to break up the soil. A very simple plough called an “ard” or scratch plough was dragged by hand to create furrows to plant the seed.

There were no chemicals to kill weeds, so the barley and wheat grew mixed with grasses and weeds. The harvest had to be brought in by hand – a difficult job with only stone tools. Sharp flint sickles were used to cut the grain off near the head. Threshing and winnowing separated the husk from the edible grain.

Grain was put on the bottom stone and ground until flower was made. It was hard, time-consuming work. The flour, which was very gritty, was either cooked immediately or stored in pits, animal skin bags or clay pots.

The Neolithic farmers had cows, sheep, pigs, goats and dogs. These were very different from modern livestock. Bone remains suggest that they were much smaller than our present breeds.

The animals provided food in the form of milk, blood and meat. But the farmers did not let any part of the remains go to waste. The hides were stretched and dried, then scraped with flint tools. Animal bones were sharpened to use for cutting and sewing the hides. The skins were then dyed, decorated and turned into clothes. Strips of hide were used to fasten stone tool-heads to wooden handles or shafts. Since the hide was “elastic” the stone head was prevented from shattering every time a blow was made, making the tool very efficient. The animal skins could also be used for making sacks and simple boats. Dung from the cattle was used to waterproof the houses and as a manure for the land.

The Neolithic people lived in wooden houses. The houses were solid structures, built to last a long time. The frame of the house was made from a strong timber such as oak. Hazel or willow saplings were woven together to make the wall. Clay and dung were spread over the wall to make it safe against wind and rain. The roof was thatched with straw or reeds. The floor was beaten earth. A trench around the house helped to drain the water away. The whole family lived in one room. They did not have beds, but slept on heather on the floor.