Baltinglass - A World in Turmoil 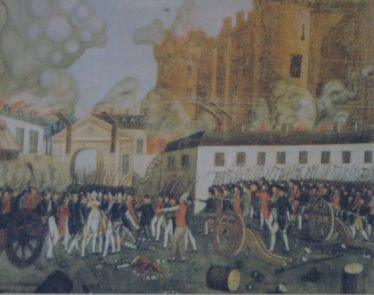 zoom
The Storming of the Bastille
Baltinglass Heritage Centre

In 1776 the colonies of North America declared their independence from the British Crown. The Declaration of Independence contained the radical claim that:

“We hold these truths to be self-evident that all men are created equal, that they are endowed by their Creator with certain inalienable Rights, that among these are Life, Liberty, and the pursuit of Happiness”.

The American victory in breaking away from the world’s strongest Empire was closely followed in 1789 by revolution in France. The French Republic was founded on the ideals of freedom, equality and brotherhood: “Liberté, Egalité, Fraternité”

The revolutions provided Irish radicals with international support and inspiration. Republican works, such as Tom Paine’s, The Rights of Man, swamped the country. The United Irishmen represented a combination of Dissenters, Catholics and Protestants who formed a movement containing elements from all layers of Irish society. They fused radical republican ideals taken from America and France with a powerful call for national independence and Catholic emancipation.

England and revolutionary France had gone to war in 1793. The United Irishmen hoped that France would provide Military aid for a rising against the British Crown.

A popular rising broke out in Ireland on 23rd May, 1798. It did not take in all of Ireland as intended, but was strong from Wexford and Wicklow in the east to Sligo and Mayo in the west, with lesser conflicts in Antrim and Down.

Baltinglass and the 1798 Rising

On May 24th, at 1PM, between 400-500 rebels, singing songs, and armed with pikes and muskets, were seen to be approaching Baltinglass. They came by way of Stratford-on-Slaney. This little town was defended by only 30 Antrim militia and 20 Ninth Dragoons under Cornet Love. The Antrim militia had been placed there as troops loyal to the British Crown. Love seized the initiative, charged and drove the rebels back along the road towards Baltinglass. At the same time Captain Benjamin O’Neale Stratford, with a slightly larger force, attacked the rebels in the rear with his Baltinglass cavalry. Trapped between the two attacks, and lacking military experience and discipline, the rebels were routed. In the ensuing, confused melee, as many as 200 rebels may have been killed, while the forces loyal to Britain did not lose a man. The attack on Baltinglass had failed.

Many loyalists were strained and broken in the Rising, when neighbour fought against neighbour. The sad fate of Thomas Kavanagh gives us an insight into these confused and brutal events. Kavanagh was a wealthy farmer in the Baltinglass area. He was enrolled in O’Neale Stafford’s yeoman cavalry corps – on the side of the Crown. But secretly, he was also a member of the county committee of the United Irishmen. His confusion about his loyalty was shown when he once turned up to a United Irishman meeting in his cavalry uniform. The actual rising seems to have caught him by surprise. Kavanagh was forced to muster with Stratford’s cavalry. But, staring out at the rebel forces under attack, he found himself unable to charge the people and the ideas he believed in. During the battle he changed to the losing side. Although he fought his way clear of the rout, and escaped to a safe house, like many before and after him, he was then betrayed. He was captured and executed in Baltinglass.

The general failure of the attacks in West Wicklow sent many of the more committed rebels to join their confederates in Wexford. The main rebel force gathered at Vinegar Hill further down the Slaney where they were surrounded and defeated. Even though the threat to English rule effectively ended at this point, Wicklow rebels held out for five more years. At first led by “General” Holt and then under the legendary Michael Dwyer, they fought a protracted and bloody guerrilla campaign from the Wicklow Mountains above Baltinglass.

The rebellion finally came to end after the crown forces built a Military Road with barracks to be set up at Glencree, Imaal, Seven Churches and Glenmalure. Under this pressure, combined with the lack of French support, and the failure of Emmet’s rebellion in Dublin, Dwyer negotiated a surrender. Michael Dwyer was transported to Australia where he later became a district constable near Sydney.

The Act of Union

The Act of Union, which was implemented in 1801, brought Ireland under direct English parliamentary control. The country was to have no self-government but would be considered an integral part of Great Britain. Baltinglass had been represented in the Irish Parliament since the days of the Abbey. The Act of Union ended this. The two boroughs of Baltinglass were disenfranchised. In the same year Edward Augustus, Lord Aldborough, died. £15,000 was paid out to his trustees, by way of compensation for the loss of parliamentary power.