The Cairn at Baltinglass Hill 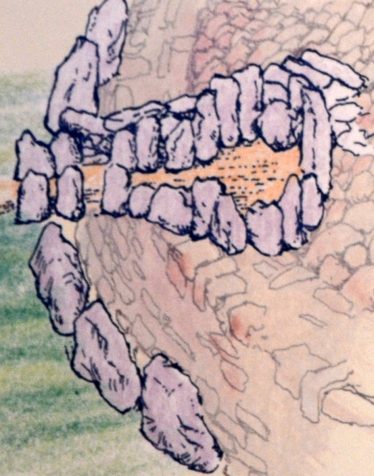 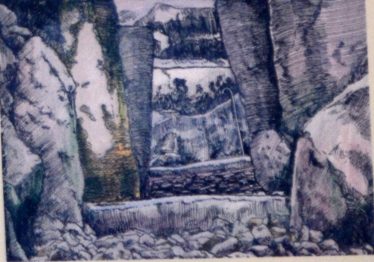 The cairn was built with local granite. Inside, it contained a number of different chambers and passages. It is likely that it was changed and adapted many times in the centuries before and after 3,000 BC.

Large stones made up an inner and an outer kerb to surround the cairn. Many smaller rocks were piled up to provide a roof, and large slabs supported the roof. Some of the stones were carved with decorative patterns. A passage, about ten feet long led from the north side of the cairn, down under the rock. At the end of the passage were three small chambers. This arrangement is known as a passage tomb.

Since human remains have been found in the cairn, we know it was a burial site, but the cairn may well have been used for religious ceremonies too. The cairn is also situated high up on the hill, and so we think the cairn was built as a sign of local strength over the land. The fact that there is a cairn here means that Baltinglass Hill was seen as an important place for the local people of the time.

As well as human remains, archaeologists have discovered a stone bowl, flint scrapers, pottery and a bone pin. Under the cairn, in soil which is believed to be part of a very early farm, archaeologists have uncovered a stone axe, a flint javelin head big enough for hunting large animals, scrapers, an egg-shaped stone, wheat grains, hazelnuts and a saddle quern for grinding grain to make flour. These remains help us to understand how these people lived.