This small, weathered carving of what seems to be a frog is found at the base of this pillar in the nave. There were no frogs in Ireland in the 12th century. So how did this frog get to Baltinglass? 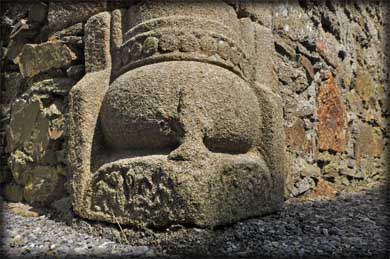 (1)    It might be a mason’s mark. This was a kind of sign left behind to let people know which master mason was responsible for the building.

(2)    It might be a symbol of evil, which was put there to remind a monk, whose gaze had wandered, to concentrate on the Mass.

(3)    It might be a symbol of the marshland wilderness from which the Cistercians originated.

(4)    Frogs and toads were used as symbols of decay in medieval times – as worms are so considered to this day. It might have been a mark to remind the monks of their mortality.