You are here: HomenextPlacesnextWICKLOW TOWNnextEast Pier to the Wolves: Coastline between Wicklow Harbour and Three Mile Water

East Pier to the Wolves: Coastline between Wicklow Harbour and Three Mile Water

“THE coastline between Wicklow Harbour and Three Mile Water is approximately 5 miles in length and consists in the main of rocky cliffs interspersed with shingle beaches as far as the Stoney Cove and the remainder of fine sand. A feature of the coast is the numerous place-names attached to rocks, caves, coves and strands. In this article and in the accompanying maps, I have endeavoured to record some of those place-names and some incidents which have occurred on this stretch of coast.

THE CHAIR : Rock formation at the elbow of the east pier, the rocks here mark the

former mouth of the river.

PAIDIN ROCKS : Traditionally the place where St. Patrick first touched shore on the

east coast, he then went to Travel-a- hawk and landed, also shown on navigation charts as “Pogeen Rocks”.

BLACK CASTLE : Built in 1179 by Maurice Fitzgerald on what is believed to be the

site of a Danish fort, it had a very chequered history over a period of nearly 500 years.

THE DANE’S STEPS or BLACK-A-MOOR STEPS : On the eastern side of the Black

Castle, there are approximately 32 steps down to the sea, these are 30 to 36 inches wide, spaced 12 to 18 inches apart and with an average depth of 4 inches. Local lore says that if you count the steps going down, and then back up you will find there is one extra.

ROLLING HILL STRAND : Called after a schooner wrecked there in the last century.

COAL STRAND : A cargo of coal was washed up here many years ago.

NORTH GLEN PLANET: A planet is an area of flagger or oar weed usually growing

on rock or foul ground and only visible at low water.

GLEN STRAND : The area from the Glen Strand to the Salt Rock is shown in the

BRIDES HEAD: Above the North Head strand is Brides Well a small spring, at the

South Strand there are the ruins of a church and also a lime kiln. 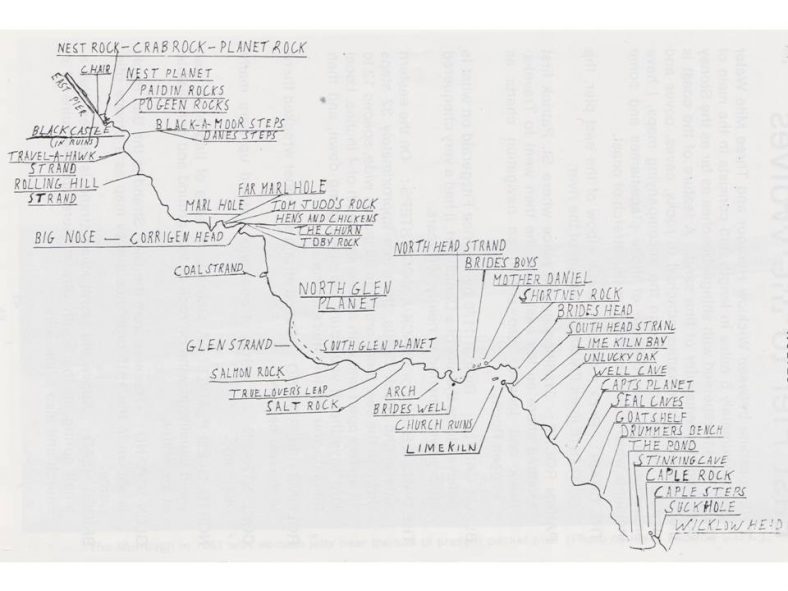 and their cargo of limestone unloaded at low tide, they were then floated off on the rising tide.

UNLUCKY OAK : A small tree growing out over the rocks, a child was killed in a fall

from the tree, it has since been cut down.

WELL CAVE : A large cave, with a depression in its bottom which at low water can

be bailed out, and is another good place for crabs.

SEAL CAVES: A favourite haunt of both the Grey Atlantic seal and the Brown seal.

CAPLE STEPS : Lead down to a platform off which lies the Caple Rock, the platform

had a winch and derrick on it and was at one time used for unloading supplies for the Lighthouses.

SUCK HOLE : An arch underneath the caple steps.

WICKLOW HEAD : Is at 275 ft. the highest point on this stretch of coast, where 4

Lighthouses have been sited in the last 200 years, the first two were opened in 1781, the upper tower was closed in 1812 after a fire, but the remaining tower was fre­quently enveloped in mist, and was replaced in 1818 by two more towers, the middle tower and the cliff edge tower, the centre tower was taken out of commission in 1865. It was also used as a coastguard lookout and semaphore station until 1921, and as lookout Post 9 of the Coast Watching Service in the second war. It was the last station in Ireland to use tallow candles, they were replaced by oil lamp in 1818, followed by coal gas in 1867, Incandescent Oil Burner 1906 and finally electricity in 1976.

STONEY COVE – SOUTH COVE : The Neptune of Southampton was wrecked on

the Wicklow Banks in February, 1788, and her hull was washed ashore at the South Cove. 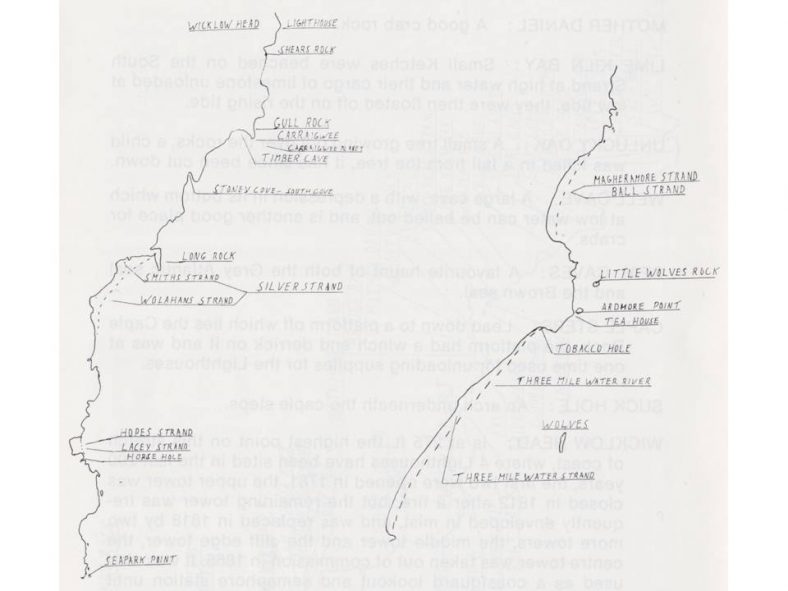 TO: The Master of

The Neptune of Southampton, Richard Culley, Master, from London to Dublin, laden with porter, hops and sugar, was lost this morning about six o’clock, on Wicklow Banks; the Master and crew arrived here in their boat about 11 o’clock this day; they all say they could not see a light on Wicklow Head, I send this for the information of the Traders concerned.

The Master’s allegations were refuted by the staff at Wicklow Head.

SILVER STRAND: May, 1788, the Frigate Hyena was sailing 2 miles off Wicklow

Head when she observed the Cutter Dispatch hove to close inshore, on the approach of the frigate the cutter immediately made off, in the ensuing chase the ships exchanged fire, they were caught in a heavy squall when it passed the Frigate saw the Dispatch close in and her boats pulling for the shore, they put an officer and ten men aboard, they found that her cargo consisted of 300 hogs heads, prime tobacco, teas, etc., the prize crew sailed her to Dublin.

BALL STRAND: The 33 ton yacht Hyacinth sank off the Ball Strand on the evening of

October 26, 1901, she was schooner rigged with a steam engine, and was heading for Wicklow after springing a leak, as she passed the strand she started to sink and the crew of 4 took to their boat, the Hyacinth sank in a few minutes, the crew rowed to Wicklow.

WOLVES ROCKS: On the evening of 25th July, 1932 a report was received in

Wicklow that a schooner was aground on the Wolves, the lifeboat under retired coxswain Edward Byrne and mechanic Col. J. Vize went to the scene, they found the schooner Pacific firmly wedged on the rocks, the coxswain of the lifeboat, Thomas Byrne, who was fishing in the area arrived and acted as ferry between the lifeboat and schooner. The Captain of the Pacific asked the crew of the lifeboat on their return to Wicklow to phone Arklow and ask the lightship tender Willy Wag to attempt to tow her off, but this was un­successful and the Pacific became a total wreck.

Thanks to C. Byrne (Senior), C. Byrne (Junior), P. Keogh, L. Carroll for advice on names and locations and J. Kinsella for charts.