You are here: HomenextPeoplenextNurse Mary Hayden: An unsung Wicklow heroine 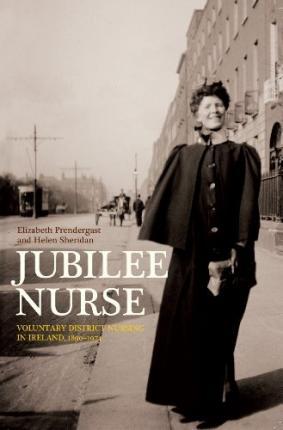 In the course of research for my recent account of the 1918/19 influenza epidemic in Co Wicklow[1], I was impressed by a couple of brief but laudatory references to Nurse Mary Hayden, whose ‘devoted and untiring services’ brought assistance and comfort to the people of Rathnew during this uniquely challenging period. So who, I wondered, was Nurse Hayden, what was her background, and what was her story?

Born on 7 October 1869, Mary Ellen Hayden was the eldest child of Lucy Hayden (nee Owens) and Joseph Hayden, a seaman, of Irishtown, Wicklow. Four more siblings were born in the years that followed – sisters Lucy Kate and Elizabeth and brothers Peter and Michael. No information is available on where Mary received her nursing training: as a future Jubilee Nurse, it is likely that she trained first in a hospital before progressing to more specialised instruction in district nursing and midwifery.[2] By 1901 she was practising as a maternity nurse in Wicklow, and living at Hillside with her sister Lucy, a dressmaker, and their widowed mother, her father having died in the previous year. A few years later Mary would nurse her mother prior to Mrs Hayden’s death of liver cancer in February 1908. The census of 1911 shows her living in Rathnew with her sister, Elizabeth, and she was one of the witnesses when Elizabeth married RIC Constable William Hayes shortly afterwards.[3]

With the reduction in her family responsibilities following her mother’s death, Mary may have been free to take on more nursing commitments: in September 1908, Dr Halpin of Wicklow reported to Rathdrum Board of Guardians that he had employed Nurse Hayden to attend labourer’s wife Mary Jane Kinsella of Coolbeg during her confinement, the regular dispensary nurse being occupied on another case at the time. The payment for her services on this occasion, approved by the Local Government Board, was ten shillings.[4] She was also called on when a dispute between the Hollingsworth and Newsome families at Ballyknockan erupted into violence, leaving a twelve-year old girl with an ear injury.[5]

In 1914 Nurse Hayden herself became a patient: ‘she was cycling across the stone bridge in Wicklow, when the wind blew the veil of her uniform across her eyes.’ Momentarily blinded, ‘she lost control of her machine and fell heavily to the ground.’[6] The fact that she ‘was rendered unconscious’ and was subsequently attended by a priest suggests that the accident was indeed a reasonably ‘serious’ one. The incident also illustrates the hardships and the dangers which might be faced by district nurses while carrying out their daily rounds, usually by bicycle, often, as in this case, in hostile weather conditions, and frequently, especially in rural areas, on rutted and unsurfaced roads.

These isolated reports, of course, only skim the surface of Nurse Hayden’s numerous duties and experiences, but such scant details as do emerge over the next few years suggest an active professional woman, well respected and deeply involved in the local community. When the annual meeting of the Wicklow branch of the Women’s National Health Association was held at the Town Hall, Wicklow on 17 January 1910, she was one of those present. The Association, founded by Lady Aberdeen, wife of the Lord Lieutenant, in 1907, was an attempt to raise public awareness of health issues and prevent the spread of TB and other diseases. Its modus operandi included public lectures given by nurses on health and hygiene, and Nurse Hayden may well have been among the speakers at those planned for Wicklow, Glenealy and Ashford in the following month.[7] A few years later she was also to the fore in the establishment in Wicklow of a Hospital Supplies Depot, which provided medical and surgical equipment, bandages and dressings for the war effort.[8]

With the outbreak of influenza in summer 1918 Nurse Hayden’s workload increased sharply. Co Wicklow was one of the counties most severely affected, with the disease moving inexorably down the coast and then inland. By October large numbers in Rathnew were reported ill, and several deaths had already occurred. Although effective nursing was acknowledged to be ‘the best path to recovery … in this pre-antibiotic era’, there was a nationwide shortage of nurses and medical personnel generally. In these circumstances, Rathnew was remarkably fortunate in its nurse, who was reported to be ‘doing excellent work’.[9] Nurse Hayden’s contribution was recognised on several occasions during the crisis by the Rathdrum Board of Guardians, which paid tribute to her ‘splendid’ efforts and ‘devoted and untiring services’. ‘A few more like her in each district’, the Wicklow Newsletter of 16 November 1918 declared, ‘would have made the task of the medical men less difficult … and saved, very probably, numerous lives.’ It was even reported that ‘she had been offered a salary to work elsewhere’, but had refused it in order to remain in Rathnew, and it was agreed by the Rathdrum Board of Guardians that she be awarded the sum of £10 in recognition of her ‘excellent services’.[10] However, the Local Government Board, requested to authorise this payment, responded ‘that the payment of a bonus to Nurse Hayden, Jubilee Nurse, would not be a legal charge on the funds of the Union, and their sanction would not have the effect of legalising it’, and one can only hope that the nurse did, in the end, receive the promised reward for her sterling services.[11]

Nurse Hayden continued to practice during the 1920s, and was appointed by the Co Wicklow Board of Health to substitute for district nurses absent on sick leave.[12] She appears to have returned to her home town during her final years, possibly to look after her younger sister Lucy, who suffered from mental health issues, and the last address we have for her is 1 Bath Street, Wicklow. She died, aged sixty-five, on 13 December 1938 at Baggot Street Hospital of a strangulated hernia, and was buried at the ‘family burial ground’ at Three Mile Water, between Wicklow and Brittas Bay.[13]

It would be fair to say, I think, that the focus of the Decade of Centenaries has been for the most part on the vocal and the militant aspects of the period – inevitably so, perhaps, given the character of the events it encompasses and the source material available. But in her quiet competence, her care for her patients and commitment to her community at a time of crisis, Nurse Hayden merits her own recognition as a Wicklow woman of distinction, and stands for so many more of her nursing colleagues in that earlier pandemic as well as in our own day.

[4] Wicklow People, 19 Sept and 3 Oct 1908. All newspapers accessed via https://www.britishnewspaperarchive.co.uk/

[11] Wicklow People, 29 March 1919.  On the Board’s reluctance to make additional payment during the epidemic, see Milne, Stacking the Coffins, p. 110.