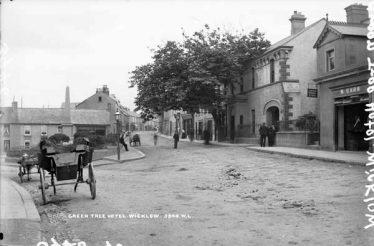 One of the best known landmarks in Wicklow Town for generations of locals and visitors alike was ‘The Green Tree Hotel.’ The Tree after which the hotel was named was located in Fitzwilliam Square just outside what is now Green Tree House. Very little is known about the tree except that it was of an unknown foreign variety. It is not known when it was first planted but it was cut down in 1923. The men who cut it down were Mr.Hanlon, Mr. Rutledge and Mr. Hayden. It was said in folklore that ‘Buzzer’ Hayden was reluctant to cut down the tree. It was cut down under the watchful gaze of a young boy. (John O’ Reilly, this author’s uncle, of Market Square, Wicklow.) The building which became the hotel was the headquarters of a horse and carriage company. Before that it had been a hostel. It was also the location for soirees and suppers held by the City of Dublin Artillery Militia and the Wicklow Artillery Militia in the 19th century. Invited guests from the town would also attend. They would gather in a room for cigars and drinks before having a grand supper and musical evening. The Green Tree Hotel operated until the 1950s. After the felling of the tree the property had been split up. Previous owners included the Kavanaghs, O’ Keefe’s and Rodgers families. In the late 18th century the Rodgers family employed a hump backed man as a waiter. The man was a huge source of amusement for locals and when he was getting married a large crowd gathered outside the hostel to see the groom off to church. The crowd drew the attention of a veteran of the Penninsular War, the Earl of Rockingham. Years before he had lain wounded on the battlefield and was saved by an Irish priest named Fr. Andrew O’ Toole, the man who built the Roman Catholic Church, now known as the Parochial Hall in Wicklow Town. The Earl never got to thank the priest but recognised him as the the priest about to perform the marriage ceremony. When the Earl found out how poor the priest was, he let the land and a house he owned at the Abbey Grounds, to the priest at a nominal rate. This was the beginning of the return of the confiscated land at the Abbey Grounds to the Catholic Church.