Evidence for thatch in Ballyknockan 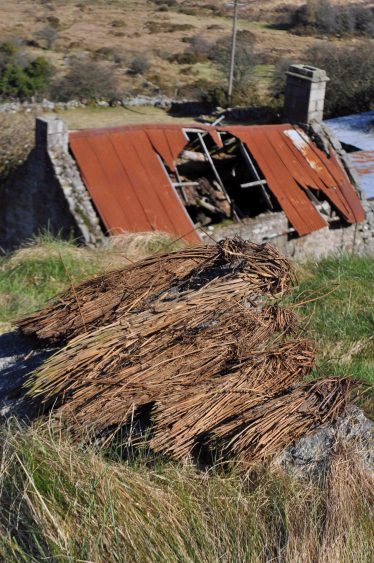 This is the last surviving thatched house in Ballyknockan, Co. Wicklow. And it won’t be around for much longer. Wicklow is not generally a county associated with thatch, unlike neighbouring Co. Wexford where thatched houses abound. In fact, thatch was formerly very common in Wicklow until about the 1930s. However, what is generally not known is that a lot of old examples of thatch still survive in Wicklow to this day. During the 1930s 40s and 50s the fashion in Wicklow was to replace thatch roofs with galvanised ones. But rather than completely do away with the old roof, very often the old thatched roof was simply retained underneath the sheets of galvanising. This was very pragmatic as it provided a ready made layer of insulation without which the galvanised roof could be like a fridge in winter or an oven during the summer. A galvanised roof can also be very noisy in the rain.

Where thatched roofs survive in Wicklow today they are almost always built over a layer of scraw or turf sods. These were very like the roll out grass you can buy now except rather than rolling these out on a lawn they were wrapped over the roof timbers with the grassy side facing up and the earth side facing into the house. Over this layer of scraw or sod a layer of bedding material was placed. This commonly consisted of heather or bracken, which was usually held in placed by wooden collops or pins driven into the sod layer underneath. This bedding material provided the ideal anchor for the thatch itself. In Wicklow this always consisted of relatively small bundles of straw. These bundles typically consisted of oat or wheat straw, or sometimes rushes. The thatched roof at Ballyknockan consisted of oat straw. The bundles were always twisted at the top and thrust onto the bedding material. As the bundles were added and the layer grew in thickness the later bundles were thrust into the thatch.

The village of Ballyknockan is quite modern in that it was established around a series of granite quarries that were established in the 1820s. These quarries provided a lot of cut granite for various building projects in Dublin throughout the 19th century. The village that grew around these quarries was home to a large number of highly skilled tradesmen. Furthermore, the presence of so many highly skilled stone cutters resulted in a distinctive type of architecture in the area. While the buildings themselves were often simple enough, they frequently feature beautiful granite chimneys as well as formal barge stones at the gables. Yet, despite these highly accomplished architectural details on a typical Ballyknockan roof, the actual roof itself was most commonly constructed using thatch.