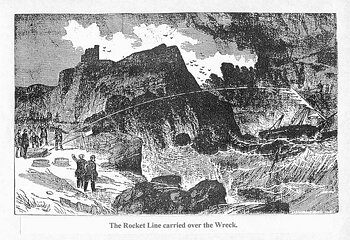 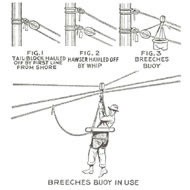 The early use of the Rocket Apparatus involved the use of George Manby’s design for firing a 6lb. mortar with a line attached across a sricken ship just offshore. The line was then used to pull a boat to the vessel and take off the crew and any passengers it carried. Henry Trengrouse improved on the design with the firing of a rocket across a ship in danger of being wrecked by high seas and storm or fire. This involved the use of a chair to remove the crew and any passengers in a chair one by one. One end of the line was attached to a mobile pole in a cart pulled by horses or at times by men, and the other end attached to the distressed vessel. Sometimes a pole was placed just on the shoreline, at a selected location and left there, in a permanent position. One example of this, a ‘monkey pole,’ stands on the Murrough at Wicklow. It is only half the height of the original. There was another pole just south of the Black Castle. John Bennett then improved on this rocket design which was used up to the 1980s.The Wicklow Town Rocket Apparatus of the 1880s, the cart and equipment is stored in a well known Wicklow factory. This was for rescues in the days of sail when time was of the essence for saving lives.

One example of the value of the apparatus in saving lives off the Wicklow coastline, took place on the 28th of January 1885 when two Italian vessels went ashore in Wicklow Bay on a Wednesday morning. There was a high sea running at the time. The Brigantine ‘Guerrera’ went ashore between five and six o’ clock in the morning at Five Mile Point. The Coastguard there used their rocket apparatus to effect a rescue. ‘A rocket was fired and a line got aboard at the first essay. The life saving apparatus was rigged up and the crew of nine, including the Captain taken ashore not a moment too soon as the vessel went to pieces with extraordinary rapidity and in a few hours, scarcely a plank of her hull was left.’ The second vessel the barque ‘Giorgina’ went ashore opposite the old railway station at Kiloughter. ‘The Wicklow Coastguards under the direction of Chief Officer Bickle arrived at the ship about 8 o’ clock with the rocket apparatus by which means the crew were got ashore, the Captain however refusing to leave his ship for some hours. As in the case of the Brigantine the men were able to save their clothes.’ Not all vessels in distress were lucky enough to have a rescue attempt mounted. The case of the ‘Elaine’ in January 1883 is an example of a ship being wrecked and an entire crew lost in the darkness of night without anyone noticing that a vessel was in trouble. By the time the wreckage was found it was too late and all that could be done was to recover the bodies of the drowned crewmen in the following weeks. They are buried at Nun’s Cross and Newcastle graveyards. Many times the only notification of a wreck was an upturned hull floating in the water or a cabin house washing up on a beach. The Rocket Apparatus was however very effective in mounting a rescue on a distressed vessel close to shore and without a doubt saved countless lives across the British Isles.