You are here: HomenextTopicsnextWICKLOW 1914-1923nextWicklow 1916nextWICKLOW LIFE COLLECTIONS 1916next1916 And All That (A Personal Account) 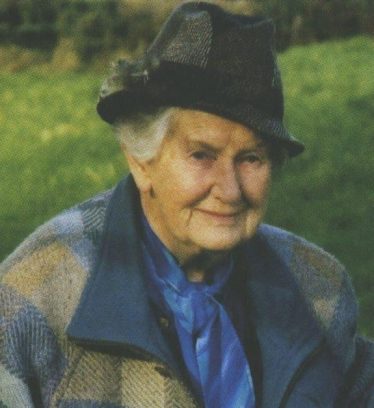 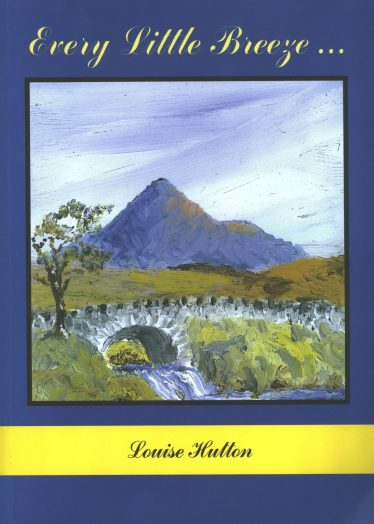 Every Little Breeze by Louise Hutton 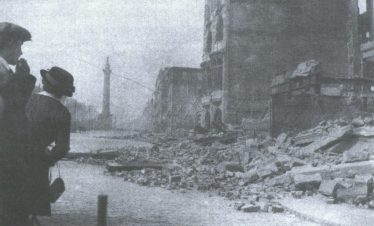 The following is an extract from “Every Little Breeze” by Louise Hutton, published in 2001 by Yerman Press. It was  presented at the Wicklow 1916 Public Collections Day by the author’s grand nephew. In this extract the author describes the events of Easter 1916 as recounted by her parents.

I was only four years old when the rebellion of 1916 broke out but I can remember it quite clearly. As I mentioned earlier, we lived just around the corner from St. Stephen’s Green.

On that Easter Monday, my parents had gone off to play golf at Malahide which is about eleven miles north of Dublin. In the morning, my nurse brought me for a walk along one side of Stephen’s Green. Near the then Vincent’s Hospital we saw a group of men standing out on the road carrying picks and shovels. We wondered what they were doing there on a holiday with only a few other people around. Later on we learned that they were the rebel advance party, about to dig themselves into the Green, and that they would be holding those trenches with guns later in the day!

When we returned home, we heard that the rebellion had broken out. We also heard that all the railway bridges had been blown up, and as a result that my parents were almost certainly stranded in Malahide. I remember very clearly kneeling on the window-seat in the study, looking out at the street below and feeling a terrible anxiety building up. The day passed very slowly. It was late supper-time before my parents managed to get home and to tell us their story.

A friend with a car had given them a lift from Malahide to the bottom of Grafton Street. From there they had walked up to the top end where it meets Stephen’s Green. There a taxi passed them carrying a British officer. It came up Grafton Street and headed straight on towards the College of Surgeons, and as it passed along the side of the Green the guns opened up from within the railings. The officer lay down flat on the floor of the taxi as it sped on. However, when it came to the Harcourt Street corner they found that there was a road-block there and they had to turn around and come back, “running the gauntlet” all over again. My parents, still rooted to the spot in astonishment, now realised that they would soon be in the line of fire. They ran left towards the Stephen’s Green Club where my father was a member. There they knocked and knocked until they were let in by the frightened staff, and were passed out through the mews at the back. They found their way safely home by various back lanes.

My father was very concerned about the safety of his mother and his sister, Maud, who still lived right in the middle of Dublin, not far from the GPO itself. By all accounts it was the principal building under fire. Their house was next to the factory in Summerhill where my family had been making carriages for one hundred and fifty years or so. I was always a bit intimidated by my Aunt Maud. She wore somewhat masculine-type clothes, and like the Boy-Scouts she was “always prepared”. She carried one of everything she might need – such as a knife, scissors, string, needles, safety-pins, a bandage etc. She often had to search for things in various mysterious pockets hidden beneath her skirts. However, on this occasion it was her new panoramic camera which would be getting her into trouble! 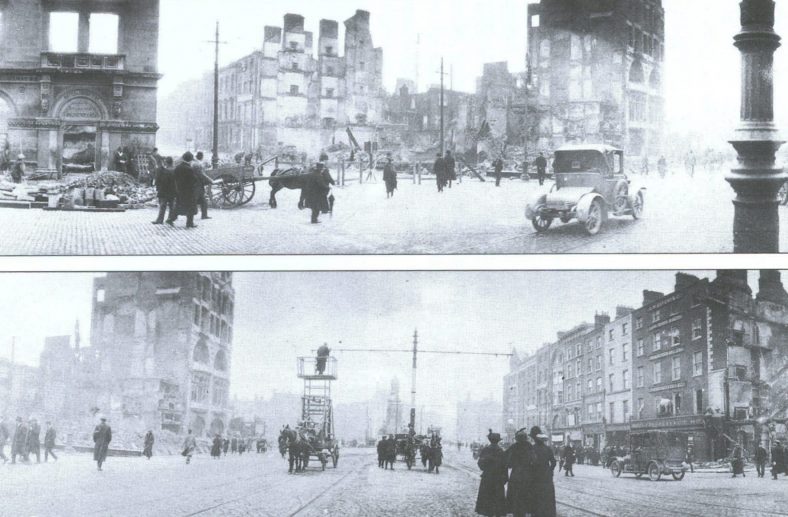 Two views of O’Connell Street (1916). The first shows the corner with Lower Abbey Street, the second looks south towards the O’Connell monument. Aunt Maud took these with a panoramic camera, which adds an interesting perspective to some familiar scenes.

While Sackville Street (now O’Connell Street) and the GPO were being pounded into rubble by the British guns, she went up on the roof every day to see what was happening. She hoped to get a good and perhaps telling photograph. But as she was wearing a dark felt hat, she was taken to be a rebel sniper and the British soldiers started shooting at HER! She had to take cover very fast!! 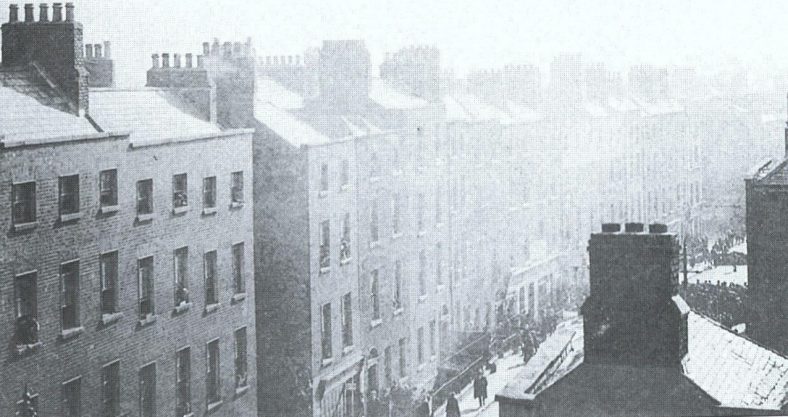 Summerhill, looking west towards Gardiner Street (1916). Just moments after taking this photograph, Aunt Maud came under fire from British soldiers located at the barricade (which is just visible below).

The rebels held out for one week before surrendering. Aunt Maud ventured out soon afterwards, and she managed to take some wonderful photographs of the GPO and the surrounding streets, some of which are reproduced here.

We had snipers on our own roofs in Upper Pembroke Street, and all around Fitzwilliam Square. Luckily, my father had had the foresight to break out a door from our back yard into a laneway running alongside our house. We were able to come and go that way in order to lay in supplies from the local shop in Baggot Street. This was providential at the time, although we came to regret it later on when we had moved out of Upper Pembroke Street to a new house in the suburbs.

In the intervening years, our old house had been converted into flats for use by British officers. Sadly, it was one of the locations in which the “Bloody Sunday” murders took place on Sunday morning, November 21, 1920. The officers were shot cold-bloodedly in their beds, on the orders of Michael Collins. Of course, he was only responding to some earlier British atrocities but that didn’t make us feel any better at the time.

My father was devastated! He felt that if he hadn’t made that door the rebels would neither have got in to start with nor have been able to escape afterwards. It was indeed horrible to think that this had happened in the old home in which I had been born, and of which I had such happy memories.

(See document below for more information on Bloody Sunday).