You are here: HomenextPeoplenextArchbishop Edward Byrne 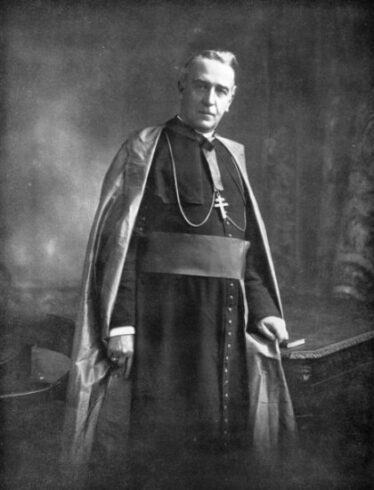 Edward Byrne was the only surviving child of Co Wicklow tenant farmer Edward Byrne from Bonagrew/Kilahurler and Ellen Maguire.  Edward was ordained to the priesthood  in 1895. He spent some time in the Irish College in Rome following his ordination where he rose to the position of Vice Rector. After his father’s death Edward returned to Dublin. He served as curate in city centre parish of Marlborough Street during a period of intense poverty  which included the Great Lockout.   Edward was renowned for his empathy,  kindness and charity. His christian and non judgemental approach to all regardless of their situation or circumstances, in the class ridden society of that era, won him great affection in the hearts of his parishioners.

Edward was inaugurated as Archbishop of Dublin on 28th  August 1921. This was a politically turbulent time in Irish history. The civil war broke out in 1922.  Archbishop Edward  never displayed any political allegiance to one side or the other but  instead  he bravely interceded between treaty and non treaty parties alike endeavouring to save men from execution. His term as Archbishop was marked by his remarkable work in the pastoral care of his flock. He insisted his priests visited their parishioners not only to promote spirituality but with a holistic approach to their communities needs.

The  appointment of Edward, a non political candidate, the son of a Wicklow tenant farmer as Archbishop also marked a change in the Catholic Churches attitude to the Irish situation

As Archbishop his involvement with the St Vincent de Paul and other lay organisations seeking to alleviate the suffering of the poor is unequalled. Documented evidence suggests any donations he received were used to help the poor of his diocese.  He was responsible for the development of Crumlin children’s hospital and he worked tirelessly to develop schools in all parishes in the Dublin diocese. Edward died in 1940 from motor neuron disease.

The  appointment of Edward, a non political candidate, the son of a Wicklow tenant farmer as Archbishop also marked a change in the Catholic Churches attitude to the Irish situation.

The 28 August 2021 will mark the centennial anniversary of Edward’s inauguration as archbishop of Dublin. As he was an only child, his only collateral descendents are the families of his first cousins.

Edward’s fathers siblings are as follows;

We, who are descendents of two of his first cousins hope to organise a commemoration event in Heritage Week 2021  if you are interested or would like to be involved contact rememberingedward@hotmail.com