You are here: HomenextPeoplenextLady Shelburne's Excursion 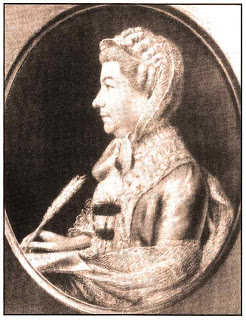 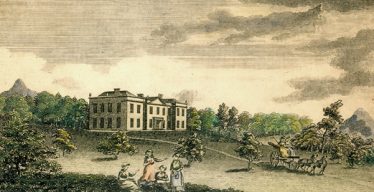 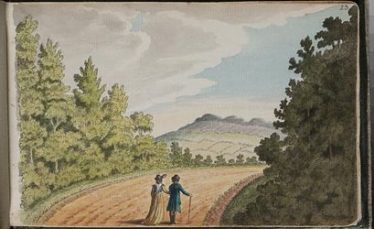 On an August day in 1770 a small party set out from the little seaside village of Blackrock for a day’s visit to the neighbouring county of Wicklow. Leading the group were Mr and Mrs John La Touche in their one-horse chaise, and with them, in a chariot and four, travelled Lady Arbella Denny, her niece and companion, Miss Katherine Fitzmaurice, and her niece by marriage, Lady Shelburne, with her five-year old son, John. Lady Shelburne, her husband and son had arrived in Dublin just over a week before, and while Lord Shelburne attended to business, his young wife spent much of her time with Lady Arbella at her house, Peafield Cliff in Blackrock.

To Lady Shelburne, fresh from the splendours of Bowood, her husband’s great house in Wiltshire, Peafield Cliff must have seemed decidedly modest. Nevertheless, she admired the ‘simplicity and elegance’ with which it was furnished, its fine prospect of the sea and its pretty garden, with a summerhouse in which the ladies could chat, read and take tea when it rained – as it frequently did during her stay. In the days which followed, Lady Arbella took her visitors to call on friends, such as Lord Clare and his sister at Cornelscourt, Lady Louisa Conolly at Castletown and Mrs Clements in the Phoenix Park, and to see sights such as Lord Charlemont’s Casino, almost directly across the bay from Peafield Cliff. Loyally, Lady Shelburne sided with those who preferred the view from Blackrock: ‘the prospect of the sea is there unbounded but for the Hill of Howth, which terminates the Bay of Dublin … That on the Marino side is quite the reverse, the Strand is muddy, the sea prospect rather more confined, but the shore bolder, as the view is terminated by the Sugar Loaf Mountain and Bray Head.’

Lady Arbella also took Lady Shelburne to visit the two charitable institutions which she supported, the Foundling Hospital attached to the Dublin Workhouse, and the Magdalen Asylum which she had founded in Leeson Street a few years earlier. At the Foundling Hospital, Lady Shelburne and her little boy saw the inmates at dinner, nearly nine hundred children, ‘all healthy, well clad and served with great regularity’, and heard about the instruction they received in various skills so that they could in due course be ‘bound apprentices or sent out to different services.’ At the magdalen asylum, she examined some of the work done by the women, and ‘took a trimming for a sack and bespoke a pair of ruffles.’  On a second visit, she witnessed ‘the ceremony of dismissing a magdalen who had completed her eighteen months’ residence in that house. It was very affecting. They all came into the chapel … and the woman in question knelt down before the altar, where Dr Thompson read her a very tender and persuasive exhortation to continue in the good course she had entered into, followed by some very proper prayers, after which the rest of them sung a hymn.’

A Day in Wicklow

The excursion to Wicklow took place on 3 August. Leaving Blackrock at ten o’clock in the morning, the party set out to travel the sixteen miles to Altidore, which ‘belongs to Colonel Pomeroy, and is one of the most admired situations one sees in this country.’ Dr Pococke, visiting Altidore  twenty years before, described it as commanding ‘a most delightful view of the rich country below and of the sea’ and ‘well shelter’d by the eminence above it.’ A castellated house built on the site of a medieval castle, it was surrounded by a garden, which ‘rises with three or four terraces one over the other, and to the north west are meadows and fields all well planted.’ Afterwards, Lady Shelburne and her party, having been invited to dine by John La Touche’s father, the wealthy banker David  La Touche, travelled the short distance to Bellevue, the country retreat which he had built some years earlier at a cost of £30,000. Their route took them ‘by the higher road winding up to the top of the mountain almost insensibly.’ Arriving at Bellevue, they found ‘a neat cool house commanding a near prospect of the sea’, and David La Touche a welcoming host, eager to show them his extensive pleasure grounds, which included novelties such as the Octagon, a summer house, built in 1766, in which was installed a mechanical panther ready to spring out and frighten the unwary.  Guided by Mr La Touche, the visitors walked ‘thro’ beautiful hay fields, by the side of which he has made a plantation, to a rock in which he has dug caverns for seats where one enjoys all the beauty of land and water. From hence we proceeded to a very different scene, that of very romantic mountains. Upon the top of one of them is a small room, where we dined, and found ourselves on the summit of a precipice looking down into the glen we had before passed thro’, with great beds of wood below us, and on the opposite bank the little silent stream in the valley below glittering with the reflection of the sun. They told us we were more than half a mile perpendicular from the road … We did not leave it till the shadows of the evening enlarged every object, and the moon “tip’d with silver every mountain’s head”.’

Lady Shelburne visited Wicklow at least once more during her stay. Travelling to Powerscourt on a stormy day in September, and struck by Lady Arbella’s description of Bray Head as ‘an old veteran soldier leading on his troops and being the first to expose himself for their safety’, she requested a detour, ‘as I wished very much to see [the sea] break against those rocks. It was the noblest prospect I ever saw. Bray Head is a huge, rough promontory, terminating the chains of Wicklow mountains and running out into the sea, and opposing many cragged rocks to the waves, which grew furious by opposition.’

Two weeks later the Shelburnes left Ireland. Lady Shelburne would never return: less than six months later, on 5 January 1771, she died at the age of twenty-five. The journal which she kept throughout her short married life, however, survives in the Bowood archives, and in the section dealing with her Irish tour offers a glimpse of the attractions which Wicklow’s dramatic mountain and coastal scenery held for aficionados of the romantic, the sublime and the picturesque well before the advent of mass tourism in the next century.