You are here: HomenextPeoplenextRemembering Private Johnston: A new war grave in a Wicklow churchyard 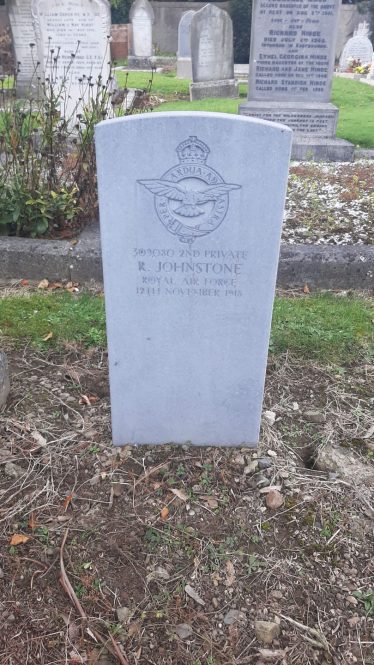 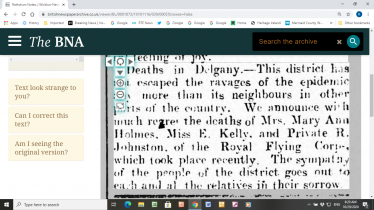 In mid-November 1918, as Europe drew breath following the announcement of the war’s end, news reached Greystones of the recent death of Private Robert Johnston of the Royal Air Force. Ironically, having enlisted only five weeks previously, Private Johnston had died not as the result of enemy action but as yet another victim of the influenza pandemic which would ultimately take many million more lives than the war itself.

Born in about 1883 in Co Cavan, Robert Johnston appears in the 1911 census as a single man, employed as a ‘motor engineer’, lodging in the home of fisherman Alfred Farrell in Greystones.[1]  In fact, he had arrived in the area a few years earlier to take up the position of chauffeur to GP, Dr Joseph Stringer Jameson. Described as ‘modest’ and ‘kindly’, he evidently became very much part of the local community, his involvements including the Greystones Orange Lodge and Delgany Men’s Reading Room.[2]

Succumbing to the ‘flu

Having enlisted in the Royal Air Force during the final recruitment drive of the war, Robert was sent to the RAF camp at Blandford in Dorset. The camp, where Rupert Brooke had trained in 1914, and where he had written his best known poem, ‘The Soldier’, was by late 1918 grossly overcrowded: a parliamentary question at this time alleged that four to five thousand men were currently living there under canvas, with ten men, sleeping on hard boards, to each tent. The recent death rate in the camp, it was claimed, was fifty to sixty a week, ‘a large percentage’ of which ‘has been due to pneumonia following cold and exposure’ as well as to influenza and other causes.[3]

Robert, arriving at Blandford probably in October 1918 as a relatively mature recruit of thirty-five, can have had little opportunity for training before succumbing to the ‘flu. On 16 November the Wicklow Newsletter announced his death as one of the local victims, and on the same day his remains arrived in Greystones, and were taken to Delgany Churchyard to await burial. On the following day, the coffin, loaded with wreaths and covered with a Union Jack, was carried into the church by six soldiers, members of a military party which had travelled from Wicklow for the occasion, and among the many who attended were representatives of local Orange Lodges in full regalia. Following the funeral service, the soldiers shouldered out the coffin to the accompaniment of the Dead March from ‘Saul’, and a firing party discharged a farewell volley over the grave.[4]

Private Johnston’s name was included on the plaque in Delgany Church commemorating those from the parish who died in World War I, but his grave in the churchyard outside bore no indication of his military service. About thirteen years ago, however, David Proger, a member of Christ Church parish, approached the Commonwealth War Graves Commission to urge the erection of the CWG headstone to which he was entitled. The matter dragged on for several years, largely, it is thought, because the Commission was unable to trace any living relative from whom to obtain consent, and it was not until this year that the Commission erected one of the distinctive CWG headstones over Robert Johnston’s final resting place.[5]

The marker,  familiar to so many visitors to foreign battlefields but located here in a peaceful Wicklow churchyard, is a reminder of one man’s brief military career, of his death almost at the moment of peace, of his sad homecoming, and of the twin curses of war and disease which destroyed the lives of so many of his generation.

[1] http://www.census.nationalarchives.ie/
[2] Wicklow Newsletter, 23 November 1918.
[3] On Rupert Brooke at Blandford, see https://www.royalsignalsmuseum.co.uk/history-of-blandford-camp/; on conditions in 1918, extract from Hansard, 6 November 1918, at https://api.parliament.uk/historic-hansard/commons/1918/nov/06/blandford-camp
[4] Wicklow Newsletter, 16 and 23 November 1918.
[5] Attentive readers will note that the CWG headstone refers to ‘R. Johnstone’. However, the 1911 census uses the spelling ‘Johnston’, while press accounts vary between ‘Johnston’ and ‘Johnson’.