You are here: HomenextPeoplenextHenry Langrell: Granny's brother the Rogue 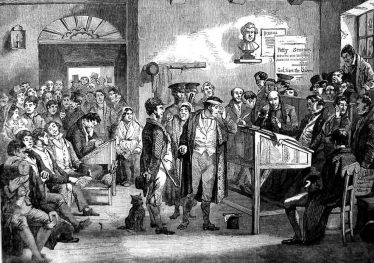 They say that going to a wedding is the makings of another. My granduncle Henry Langrell was to meet his wife Jane Anne Prestage at the wedding of his brother Isaac in 1891, which meant that on the 16th June 1892, there was another Prestage/Langrell wedding celebration at the Prestage farm in Park, Arklow. This time it was my grandmother’s brother Henry Langrell who married Jane Anne Prestage, daughter of Thomas Prestage, and his second wife, Maria Hempenstall. For Thomas Prestage, he now had two Langrell sons in law. One was my granduncle R.I.C. man Isaac Langrell who was steady and reliable, the other Isaac’s brother Henry who would prove to be a headache for the Prestage family.

After his marriage to Jane Anne, Henry Langrell set up home with his in-laws at their farm at Park, Arklow. Henry and Jane Anne became the parents to two children Mary Jane, and William James. All was not well within their marriage. It was shortly after the birth of William that Henry Langrell left the Prestage Farm at Park. He then moved around the area farm labouring.

By 1900 Jane Anne had also left Park, leaving her daughter Mary Jane aged six years with her grandmother Maria Prestage in Park, Arklow while son William aged five years was a boarder living with Richard Adams a policeman and his wife Annie a District Nurse in their home at Windmill Cross, Kildare. By 1903 Henry was working in Bray for a Mr Ledwidge, working alongside him was a very attractive young woman named Elizabeth Devlin. Elizabeth was a single mother with a four-year-old daughter. Elizabeth with her daughter Alice lived with her charwoman mother also named Elizabeth Devlin.

By the end of 1903, Elizabeth Devlin was expecting her second child. Henry had explained to Elizabeth he was a widower. So, when he proposed marriage shortly before the birth of their child, she said yes. In the Registrar’s Office in Kingstown on 4th January 1904, Henry married Elizabeth. Five weeks later on 10th February 1904 their son, Thomas was born. To keep Elizabeth happy Henry agreed to raise Thomas as a Catholic. However, this second marriage of Henry Langrells did not last as long as his first. Two years after he married Elizabeth, he walked out on her and the children. He did continue to work in the Bray area.

The arrest of Henry

In 1909 Henry Langrell was arrested at Bray. He was accused of bigamy and was held in Kilmainham Gaol. The charge was that he had married Elizabeth Devlin in 1904 while his wife Jane Anne Prestage was still alive. At a sitting of the Petty Session Courts in Arklow on the 28th September 1909, he was charged and committed for trial to Mountjoy Gaol.

His address was given as Bray at the Petty Session and Cappa (Cappagh) in the jail records. (Cappagh, Aughrim was where he was born). His next of kin was listed as his wife Elizabeth same address.

‘At a special court in Arklow on Monday evening before Mr R. Philpot J.P., a middle-aged man named Henry Langrell said to be at one time a policeman, was put forward in custody charged that on the 4th January 1904 at Kingstown, he unlawfully contracted a bigamous marriage with Elizabeth Devlin, his lawful wife Jane Anne Langrell resident at Arklow Rock being then alive. The latter it is understood is at present in India.

The only evidence offered was that of Sergeant Slater, Bray, who arrested the accused at Windgates, Bray, where he was working as a labourer, about noon that day. When charged with the offence and cautioned the prisoner exclaimed. ‘Alive! Not at all. Eleven years passed before I met this other woman. I was drunk when she took me in at Kingstown (laughter). There was some discussion about whether it was ‘past’ or ‘present’ that was intended by the prisoner.

Mr Martin, C.P.S. stated – ‘It is because it was the woman that was taken in and not him. (laughter). The sergeant, continuing his evidence related the rest of the prisoner’s statement. ‘The Arklow woman pursued the accused, can do nothing to me, as she left me herself. I did not put her away. When she was going, she took about 25 pounds with her. I have not seen or heard from her from that day to this’. The prisoner, who was observed to enjoy immensely the reminisces conjured up by the sergeant’s story, as a broad smile on his face showed, was asked by the magistrate had he any question to ask. Langrell: No. the sergeant has told the whole thing. I understood that the woman was dead for the past six years. Don’t believe the woman is still alive.’

When Elizabeth Devlin entered the packed Court, there was a lot of interest. She said she had met Henry Langrell when they were both working for Mr Ledwidge, Bray. He had confided in her that his wife had died, telling her she was always delicate and had passed away from bile on the liver. She said he made the advances towards her. He asked her to marry him, telling her they would have to marry in the Registers Office, as it would take time for him to change his religion and marry in her church. When she married him, he had promised to become Catholic. They were together three years when Henry Langrell left her.
When Henry married Elizabeth Devlin at Kingstown on the 4th January 1904 to avoid detection, he signed his name Henry Langrim. In court, Henry Langrell asked to speak to his mother in law. Maria Prestage said she had no desire to speak to him and never would again.
Mountjoy Gaol.

Henry Langrell was committed to Mountjoy Gaol in Dublin. Three months later his case came to trial. In Mountjoy on the 10th of December. 1909 he was found not guilty, acquitted, and discharged.

This extract from my family history book WHO WAS GRANNY?