You are here: HomenextTopicsnextWICKLOW PUBLICATIONSnextSurplus People - From Wicklow to Canada

Surplus People - From Wicklow to Canada 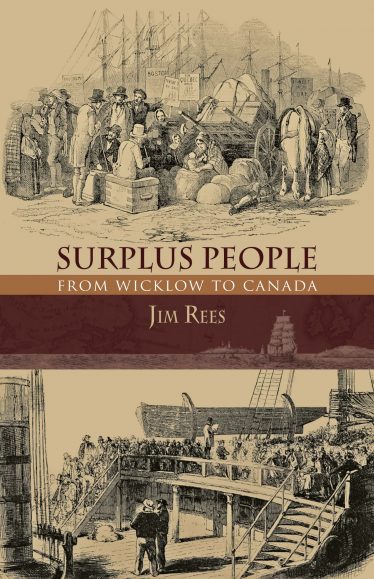 Surplus People – From Wicklow to Canada  by Jim Rees is published by The Collins Press, price €12.99. It is available from all good bookshops and online from www.collinspress.ie

The Great Famine in Ireland was a catastrophe and County Wicklow didn’t escape. It doesn’t appear in many of the books dealing with the Famine yet it has been estimated that its population decreased by 21.5% between 1841 and 1851 – over 27,000 people. Around 6,000 were removed from the 85,000-acre Coolattin Estate .

The clearances of uneconomic tenants from the estate were the most organised in Ireland. From 1847 to 1856 Lord Fitzwilliam removed men, women and children from his estate and finance for assisted arranged passage from New Ross in Wexford to Canada on emigrant ships such as the Dunbrody .

Many tenants were destitute and more than a few were ill on arrival in Quebec and New Brunswick. Hunger and overcrowding at quarantine stations, such as the infamous Grosse Île, resulted in further disease and death.

The first ship arrived at Grosse Île on 14 May 1847 and on 26 May, thirty vessels were at anchor in the river with 10,000 passengers awaiting inspection. On 3 June, the healthy were moved to the east of the island with an armed guard of fifty soldiers dividing the two sides of the island. By 9 June, thirty-six more vessels had arrived, with 13,000 passengers on board. About fifty people died every day on the island from typhus and dysentery. Many were moved from the island due to lack of space and resources. Some died before their arrival on the mainland. A large number were so weakened they were unable to work and it took several generations to break the cycle of poverty endured by the immigrants.

In this first account of this intersection between Irish and Canadian history, Jim Rees explores the tragedy, from why the clearances occurred to who went where and how some families fared in Canada.

By Gillian Hennessy, The Collins Press