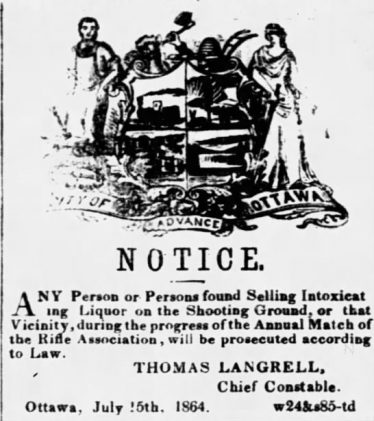 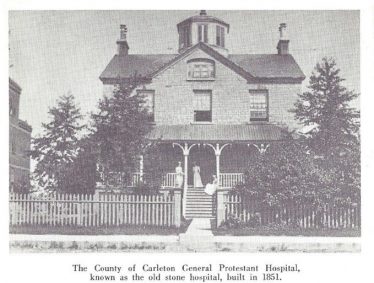 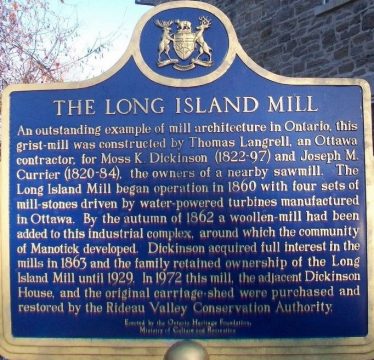 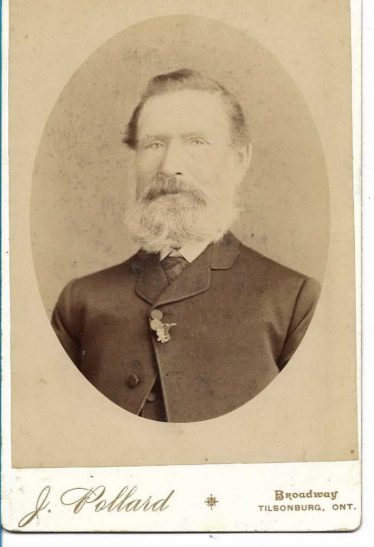 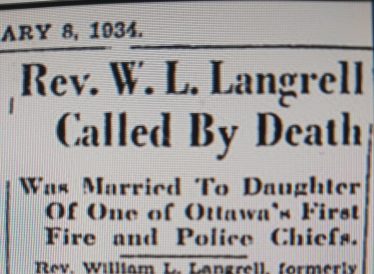 Thomas was born in 1808. He was the son Richard Langrell, Cappagh, Aughrim and his wife, Elizabeth. I know nothing about his early life in Ireland until he arrived in Canada in 1835. He was followed in 1836 by his newly wed brother Joseph with his wife Mary Fitzgerald and their sister Mary Langrell who married (Red) Humphrey Hughes from Arklow. Later the siblings were joined in Canada by their brothers John and Isaac. It is likely the Langrell siblings spent their early years at Cappagh and Derrylossary. In the Tithe Applotment books of 1831 Richard Langrell was at Ballinacorebeg, Derrylossary, his landlord Rev. Edward Synge.

Thomas Langrell the builder, settled at Bytown where he was to become a one of Ottawa’s first Police and Fire Chiefs. He was also a leader of the Orange Lodges. The first meeting of the Orange Order in Bytown was held in 1847 in the Market Hall at Sparks and Bay Street. Prior to 1847 meeting were held in private houses. In 1872 an Orange Hall was built at Queen and O’Connor Streets.

On the 17th March 1842, Thomas Langrell married Mary Ann Connors who was born in Newtownbarry, Wexford in 1820. She was the daughter of Matthew Connors and Mary Anne Sherlock. The Connors left Newtown Barry arriving in Canada with their large brood in the early 1820s. The Connors family were Wesley Methodists. Matthew Connors was a hat manufacturer in Ireland. The demand for military hats had declined in the early 1800s. The dye used in the manufacturing of the hats was affecting Mathews health. The decline in demand for hats and the effect of the dye, were two reasons for the Connor’s emigration. (The dye used in felt hats coined the phrase ‘mad as a hatter’).

Although Thomas Langrell escaped the famine in Ireland, he was to experience the awful consequences of it ten years after he arrived in Bytown.
Bytown General Protestant Hospital. Extract from the Ottawa Citizen Newspaper.
The proverbial thoughtlessness of youth is spoken of but the little settlement of Bytown was still in early youth when the thought of the suffering and misery in her midst oppressed her, and from then until the present day, shelter and kindly care have been ready for her own afflicted ones, and for the foreigner who sought our shores.

The need of a hospital was impressed upon the citizens of Bytown with fearful distinctness in 1847- the year of the great famine in Ireland – when the tide of emigration from that country, in its westward drift, left many of the victims of ship-fever stranded at the Rideau canal locks, and here in the crowed emigrant sheds, hundreds who had fled from famine at home, and had endured the trials and vicissitudes of an Atlantic voyage, and a long over land journey, found nothing for them in our land but disease and death. And the principal signs of activity on the main street of the town were the funeral carts on their sad procession to the Sandy Hill cemetery, followed by two or three and often by no mourning friends.
Shortly after this a meeting was held in the Methodist church on Sparks Street where a decision was made to build a hospital. Thomas Langrell was at that meeting. When the hospital opened in 1851 Thomas Langrell was a Trustee and a Director.

Thomas Langrell and Mary Anne Connors became the parents of at least ten children. Mathew, Richard, Elizabeth, Eleanor, Joseph, Thomas, Francis, Ruben, Mary Jane, Horace, and Milton. Thomas and Ann suffered the loss of several of them at a young age. Mathew died when he was 18 years old. Richard died at just seven years old. Joseph was a 23-year-old chemist when he died. Mary Jane was only 14 years old. There were also happy times for the family. Elizabeth Anne married Richard Whiteside. Son Ruben left Canada moving to the U.S.A. Milton moved to Hartfield, Connecticut where he had managed and later owned the New Haven Hotel. When Thomas Langrells niece Elizabeth (daughter of Joseph) was 13 years old she left her home in Alfred Prescot to live with her uncle Thomas to be educated. Elizabeth became a teacher, married, and lived out her life in Bytown.

Watsons Mill is a historic gristmill in Manotick, Ontario, Canada. It was constructed by Thomas Langrell for two prominent Ottawa businessmen Moss Kent Dickson and Joseph Merrill Currier. Watsons Mill is supposed to be haunted by the ghost of Ann Crosby Currier, the second wife of Joseph Currier. Six weeks after their marriage, after returning from honeymoon Currier and Dickinson held a party to celebrate their first successful year of operation. While Joseph Currie and his young bride were making their way through the congestion of moving equipment and machinery tragedy struck. Ann’s crinoline and dress became caught in one of the turbine shafts on the second floor of the Mill, and she was flung against a pillar, killing her instantly. Since that time there have been numerous unconfirmed sightings of Ann’s ghost in Watson’s Mil

Thomas Langrell was working as a building contractor In Ottawa in 1863 when the first Police Commission was formed. It consisted of H.J. Friel, Mayor J.B. Lewis recorder and H.P. Hill police magistrate. Its first action was to separate the office of High Bailiff and Chief Constable.

At their second meeting, Thomas Langrell was named as Chief Constable with a team of ten men. Thomas wore a blue military frock coat single-breasted, with plaited buttons and stand up collar, silver crowns embroidered on each side. He wore a cloth foraging cap with broadband and silver crown in the front, with black or blue trousers. White gloves completed the outfit together with an approved baton.

Thomas was paid on a fee basis, so much per criminal until the commission in 1865 agreed on a salary. His salary was then 800 dollars per year. By the time he retired it was 1,200 dollars. Thomas resigned on April the 5th 1875. In his diaries, which he wrote up each day he was very in tune with the weather. As well as detailing, what was happening with his prisoners he wrote in detail about the changing days and seasons. He also wrote about the Queen and her birthday.

Thomas also kept in touch with his relatives in Wicklow. In 1875, following his resignation from the police force, he made a trip to Ireland to visit with his relatives. On that trip, he invited William Langrell born at Cappagh in 1854, the son of Ann Lawrence, Moyne and Isaac Langrell, Cappagh to Canada. William Langrell never knew his father Isaac who had died some months before his birth. He was only months old when his mother Ann Lawrence Langrell married her second husband her neighbour at Cappagh, Thomas Thompson. Anne Lawrence’s son William Langrell with his sister Sarah grew up at Cappagh with their stepsisters and brothers. The lived alongside Henry Langrell and Kate Hinch. Perhaps William was influenced by Henry Langrell’s preaching. He became a Methodist Minister.

William Langrell was in his twenties when he arrived in Ottawa in 1878 — travelling to Canada to visit Thomas Langrell’s family. It was on this visit to the home of Thomas Langrell that he met the police chief’s daughter Eleanor. He then left Canada for Minnesota where he worked as a ‘saddlebag’ preacher. Six years later he was back in Canada. This time to marry Eleanor and bring her to Minnesota where William, who never held a parish, continued with his preaching mission.

Newspaper report on the funeral of Thomas. All that was mortal of the late Thomas Langrell, ex-chief of police, was laid to rest in Beechwood, this morning. The religious services were conducted by Rev. Mr Maverity of the East End Methodist church. The funeral was largely attended, including the whole police force which turned out in a body to pay a last tribute of respect to the ex-chief.

Some Diary Extracts from 1869

From the Ottawa Citizen newspaper:

April 1st Thomas wrote the weather had turned very cold and that the ice on the River Ottawa looks as good as any time during winter. City very quiet. Police quickly and faithfully performing their duty.

8th April Thomas wrote three drunks had been placed in the lock up he added the city is very quiet. There have been no crimes of a serious nature for months past.

April 9th Thomas wrote to the police commissioners a long report on the orderly condition of the city and the excellence of the force. On the men’s clothing, he remarked: I hope the board will remember that they get their new clothes each year for the Queen’s Birthday.
May 6th A grand ball given last night at the skating rink which was beautifully fitted up for the occasion. The Governor and Lady Young were present, the members of both houses and hundreds of respectable citizens of the town. A great success. Everything passed off in the most orderly manner. Men on duty all night.

July 1st Today is Dominion Day in honour of the uniting of the British provinces into one Confederation or Dominion. Weather looks dark and very like rain. The men are all on and duty and dressed in their new uniform. Business is suspended and flags flying. Immense crowds of people left the city for different fields of pleasure. No cases for the police court.
August 13th Hay crop the heaviest in years.

Sept 22nd Thomas recorded there was one unfortunate in court, he added; Intemperance is a great evil.

11th October Thomas records H.R.H. Prince Arthur came here. There are some beautiful arches and a large amount of bunting floating. All the police on duty.

11th December – A more beautiful winter morning I have never seen. The sleighing is good.
31st December last day of 1869 Thomas wrote; Nothing of importance today. The city orderly. Only a little doing in the police courts and the year ended as it began – quiet.
(From the Ottawa Citizen newspaper).

The Chief Thomas Langrell had a great sense of humour and while he was stern and a real terror to evil-doers there were times when he relaxed and had an almost human side. He was a very religious man who knew his Bible better than he knew his job and he knew that well.